Q. What’s the best way to try out microphones on an orchestral recording? Skip to main content

Q. What’s the best way to try out microphones on an orchestral recording?

I want to trial some microphones on a 60-piece school orchestra performance, and I only get one shot at positioning the mics. In front of the orchestra, I'll be trying out a pair of Bartlett TM125C boundary mics, with a roughly ORFT positioning — I know this will favour the front of the ensemble, but I just want to 'hear' them this time round — and they may also be useful for a small 'cello quartet at one point in the concert. Above and in front of the orchestra, I'm planning to have an ORTF array of Beyerdynamic MC930s, positioned for the best 'depth' and direct/reverberant sound balance, and bearing in mind a worrying 'slap back' off the sidewalls. Overall, I'm looking for a coherent orchestral sound, but with good localised images.

I also want to try out two AKG 1000m hanging modules with either CK31 (cardioid) or CK32 (omni) capsules; I'll probably go for omni this time. I'd like to think I could position the AKGs either as a spaced pair alongside the main MC930 pair to see how they compare, or as two 'spot' mics above the orchestra (maybe 10 to 20 feet apart) to mix in more of the rear instruments. Is the latter a bad idea with omnis, or would cardioids be better? And would the omnis work as a spaced pair (two to three feet apart), somewhere on a central axis and mixed in with MC930s? I need to be visually unobtrusive, and I don't want more mics than necessary for a final rig with this venue/orchestra.

SOS contributor Mike Senior replies: All of the possibilities you mention are feasible rigs, but which is most appropriate depends on the specifics of your situation. With amateur and student orchestras, my biggest concern would usually be one of balance, and in particular whether the strings and woodwind would be able to compete with the brass and percussion. If the brass were overbearing, the positioning of the main frontal mic rig (and, indeed, the two boundary mics) would work in your favour to an extent, but at the expense of the woodwind, so my instinct would probably be to direct cardioid AKGs towards any weaker sections of the woodwind. 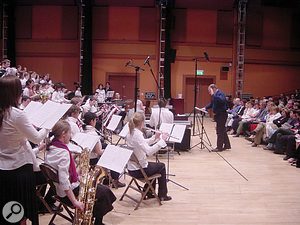 With amateur orchestras, balancing can be a big concern. Typically, brass can be too overbearing and drown out the woodwind section, so it may be worth directing a cardioid mic specifically towards the woodwinds for safety.

Alternatively, you might also consider spotting the double basses with an AKG in omni mode to try to bring out some of the lower frequencies that the main cardioid pair will tend to miss. Another possibility might be to leave the cardioid spot mics 'roving', repositioning them between pieces to suit the needs of each; specific soloists, perhaps, or intermittent orchestral additions such as harps or pianos. There's also something to be said for using omni AKGs as your main stereo pair in a spaced configuration to get that bass extension for the full-orchestra pickup, and then repurposing the Beyers as the spot mics. That approach would, however, generate softer stereo positional information than using an ORTF rig, which seems at odds with your goal of "good localised images”, and would require a closer positioning of the mics to the orchestra for a given wet/dry balance, something that doesn't tend to flatter less confident string sections.

If the orchestra is of a sufficiently high quality that balance is less of a concern (or if your production technique is more concerned with realism than flattery!), you could certainly use two independent stereo rigs to complement each other. One idea would be to suspend the second pair over the centre of the orchestra to give more dry definition to the woodwind, brass and percussion, and if both rigs were directional you could retain fairly clear stereo positioning, as long as you kept the mics roughly on a central axis. Alternatively, you could use two mics as outriggers for a central pair, pulling more detail from the edges of the image (as well as more room sound). Of these two approaches, I have to say I'd probably favour the former, and using cardioids for all four mics. Not only would that provide some scope for front/back rebalancing, but it should also reduce the impact of the problematic sidewall reflections you mentioned. You'd probably get a better idea of the relative capabilities of the mics when used in comparable roles like this than if the Beyers were used as a stereo rig and the AKGs as spot mics, say.