Q. What’s the difference between PPM and VU meters?

I recently came across a plug-in that incorporates both VU and PPM metering, and it got me thinking: what exactly is the difference between the two?

SOS Technical Editor Hugh Robjohns replies: These are both, strictly speaking, obsolete analogue metering formats! In short, the VU meter shows an averaged signal level and gives an impression of perceived loudness, while a PPM indicates something closer to the peak amplitude of the input signal. However, in our modern digital world, neither meter really performs adequately, and the current state of the art is enshrined in the new ITU-R BS1770 standard, which is being adopted very rapidly around the world in the broadcast sector and elsewhere. This is an excellent metering system that provides a new and very accurate Loudness Meter scaled in LUFS — which does a much better job than the VU — along with an oversampled True Peak Meter scaled in dBTP, which does a much better job than the PPM. I urge everyone to use these meters in preference to everything else! 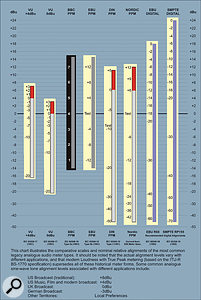 However, for historians, the VU (or Volume Unit) meter was conceived in 1939 and originally called the SVI or Standard Volume Indicator. It was developed as a collaborative project by CBS, NBC and Bell Labs in America and, since the meter scale was calibrated in 'volume units', that's the name that stuck! The SVI/VU meter is amongst the simplest of all audio meter designs and essentially behaves as a simple averaging voltmeter, with a moderate attack (or 'integration') time of about 300ms. The needle fall-back time is roughly the same, and the full meter specification is enshrined in the IEC 60268-17 (1990) standard.

A VU meter's display is influenced by both the amplitude and duration of the applied signal. With a steady sine-wave signal applied to the input, a VU meter gives an accurate reading of the RMS (root-mean-square, or average) signal voltage. However, with more complex musical or speech signals the meter will typically under-read, and a sustained sound will produce a significantly higher indication than a brief transient signal, even if both have the same peak voltage. In theory, a VU meter should respond to both the positive and negative halves of the input audio signal, but the cheapest implementations sometimes only measure one half of the waveform, and so can provide different readings with asymmetrical signals compared to full VU meters.

The simplicity of the VU meter design makes it relatively cheap to implement, and so VU meters tend to be employed in equipment that requires a lot of meters — such as multitrack recorders or mixers — or where accurate level indication is not essential.

The reference level indication is 0VU, but the audio level required to achieve that could be whatever the user wished. The original SVI implementation included an adjustable attenuator to accommodate any standard operating level up to +24dBu (US broadcasters still use nominal reference levels of +8dBu). Modern VU meters usually omit the user-adjustable attenuator and are typically set to give a 0VU indication for an input level of either 0dBu or +4dBu. The latter is the most common 'pro standard', but a lot of manufacturers use the former alignment, including Mackie. In general, then, the SVI or VU meter tends to show the average signal voltage, and gives a reasonable indication of perceived loudness.

The Peak Programme Meter or PPM is a much more elaborate design and pre-dates the VU, as its development started in 1932, with the meter we know today appearing in 1938. Despite the name, PPMs don't actually indicate the true peak of the signal voltage. Early units employed a 10ms integration time (Type II meters), while later units reduced the integration time to 4ms (Type I meters). These short integration times were selected specifically to ignore the fastest transient peaks, and as a result the PPM is often referred to as a 'quasi-peak' meter to differentiate it from true-peak meters. Typically, very brief transient signals will be under-read by about 4dB. The reason for ignoring brief transients was to encourage operators to set slightly higher levels than would otherwise be the case, on the assumption that any transient overloads in recording or transmitting equipment would be inaudible, which is generally the case for analogue overloads of less than 1ms.

Whereas the VU meter has fairly equal attack and release times, the PPM is characterised by having a very slow fall-back time, taking over 1.5 seconds to fall back 20dB (the specifications vary slightly for Type I and II meters). The reasoning for the slow fall-back was to reduce eye-fatigue and make the peak indication easier to assimilate. The specifications of all types of PPM are detailed in IEC 60268-10 (1991), and the scale used by the BBC comprises the numbers 1-7 in white on a black background. There are 4dB between each mark, and PPM 4 is the reference level (0dBu). EBU, DIN and Nordic variants of the PPM exist with different scales. The EBU version replaces the BBC numbers with the equivalent dBu values, while both the Nordic and DIN versions accommodate a much wider dynamic range.