I'm using a big desk with a shelf on the back as my studio workstation. Being partially sighted, I need my screen fairly close in order to see the details. I'm thinking about buying some studio monitors to put up on the back shelf of the desk, but will the fact that my screen is in front, albeit in the centre of the speakers, be a problem? Would the problem concern stereo imaging more so than frequency response? The screen is a 24‑inch model that is mounted on an arm for maximum flexibility. 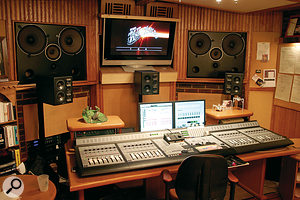 It's better for acoustics if everything, where possible, is placed symetrically in a room. If you require a large screen in a studio, for any reason, it's a good idea to place it between and behind your monitors.

SOS contributor Martin Walker replies: To get the flattest frequency response from your loudspeakers, you need to install some acoustic treatment to damp down the room 'modes' that make each room resonate at certain frequencies, depending on its dimensions.

On the other hand, to get the best stereo imaging, the left and right halves of your studio should, if possible, be a mirror image of each other, and you should place the loudspeakers symmetrically with respect to the walls and fit acoustic absorption at the 'mirror points' on both side walls and the ceiling. 'Early reflections' bouncing off these points will obscure the details in your mixes and make it more difficult to pinpoint where each sound is panned.

Even your gear should, ideally, be installed in a symmetrical fashion. For instance, avoid placing cupboards, shelves, desks or keyboards on one side of the room only, since the sound bouncing off them will result in an unbalanced stereo image that will muddle your imagery.

Moreover (and here's where we get to your specific query), you can get troublesome reflections from audio bouncing off other objects between your ears and the loudspeakers, such as mixing desks and forward‑mounted monitor screens. Maintaining a clear area in front of your loudspeakers is the secret of good stereo imaging, although, thankfully, most modern flat-screen monitors will result in far smaller acoustic problems than the old (and relatively massive) CRT monitors.

A quick way to hear what difference any object is having on your stereo image is to temporarily drape a duvet, or similar, over it while listening to a mono signal being played through both loudspeakers (solo acoustic guitar might be a good one to try). If, with the duvet in place, the phantom central image between your loudspeakers becomes better focused and more concrete, as if a physical player is sat in front of you, then that object is interfering with your imaging.

There are several possible ways to avoid such audio compromises. The easiest is to place your monitor screen further away, either between the loudspeakers or behind them. This generally means you need a larger screen, and some studios hang huge monitor screens on the wall behind the speakers so their clients get a good overview of what's going on. However, even with 20/20 vision, this approach is often not good enough for detailed editing, so a second, smaller, screen is generally mounted much closer to the operator. Keep this as low as possible so that it's out of the speaker's line of fire.

Another more specialised, but elegant, alternative that I've spotted in various studios is a monitor screen recessed into a hole in the desktop. An easy version of this is to remove your monitor stand and lay your screen at an appropriate angle on your desktop, well below the critical area in front of the loudspeakers.

Yet another approach is the one you've already adopted. Since your screen is "mounted on an arm for maximum flexibility”, you can simply push it back out of the way of the loudspeakers for critical listening. This is a great idea for any musician; if only we had a similar option for mixing desks!

Top 10 Boring Things That Are Really Important In The Studio
1 week 11 hours ago.