Q. Why is vinyl not the best medium?

I still buy vinyl records simply because I like listening to them, but I'm under no illusion that vinyl is a 'perfect' format. Along with the inevitable pops, clicks and surface noise, I am always annoyed by the distortion that starts to creep in toward the centre of the record. Can you tell me why this occurs and whether anything can be done to prevent it? Also, why do I prefer the sound, when I know that digital audio is technically superior?

SOS Technical Editor Hugh Robjohns replies: In theory, digital (especially 96kHz sample-rate digital, which takes any filter issues out of the way) should win hands down, because it is unquestionably superior in every measurable way. However, current mastering practice means that vinyl releases can often sound noticeably better from a dynamics point of view, bizarrely. Also, the whole LP-playing procedure, physicality and the 'mysticism' of vinyl does make it a more involving — and therefore pleasurable — experience. I love and use both regularly. 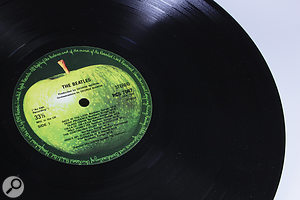 Despite its obvious charm, the performance of vinyl was bettered by digital audio systems many years ago!

The end-of-side distortion problem is caused by a combination of factors, but it's essentially a fundamental design flaw of both the medium itself and the standard replay mechanisms, and it can never be completely eradicated.

The basic issue is the linear speed of the groove modulation — the speed of the vinyl passing under the stylus — which becomes much slower for the inner cuts compared with the outer grooves. This means that the recorded wavelengths are correspondingly much shorter and the slope angles are much greater for the inner grooves compared with the outer ones, so the pickup stylus has a much harder time trying to follow the groove.

The problem is worse with higher recorded volumes and greater amounts of high-frequency energy, so cutting engineers tend to prefer placing quieter songs, with moderate bass and lower HF energy towards the centre of the disc — or just restrict the playing time so that the grooves don't have to get too close to the centre.

Then there is the vinyl itself. The recorded wavelengths for high frequencies at the inner grooves approach the grain size of the vinyl substrate, particularly if the disc is made with cheap recycled vinyl, so that also creates distortion problems because the vinyl doesn't actually store the required waveforms properly.

Next is the issue of cartridge/stylus alignment errors, both horizontally and vertically. Records are cut with a parallel tracking system that keeps the cutting stylus perfectly tangential to the circumference of the groove, but the record is replayed with a pivoted arm system. As a result, the stylus can only ever achieve the correct angle at two specific points across the surface of the disc. If set up well, with a 10-inch (or longer) tone arm, the tracking error can be reduced to about ±1 degree across the whole disc, but often it is much, much greater than that because of improper alignment and the use of shorter tone arms.The tracking errors are often more evident on the inner grooves.

There are a lot of different cartridge alignment protocols designed with different sets of compromises, such as trying to improve inner-groove tracking at the expense of outer grooves, where the higher linear speed makes the errors less audible. This is all part of the 'black magic' art of vinyl nirvana... but basically it's trying to put a 'Superman' sticking-plaster on a severed limb: the format is inherently 'broken'!

Finally, there are all the various 'damage' aspects. If the pressing stamper is coming towards the end of its life, and is badly worn, distortion will be embodied in the disc at the outset, and it will inherently be worse on the inner grooves. If the disc has been replayed on a poorly setup record player, the inner grooves will suffer the greatest damage and thereafter always replay that damage. If the disc is dirty, the dirt will have the greatest impact and effect on the inner grooves, because the dirt particle size becomes more significant in respect of the recorded wavelengths. Vinyl deposits also build up on the stylus as it plays, changing its shape and reducing its ability to track the groove, which again becomes more problematic on the inner grooves (and can inflict more damage too).

And so on, and so forth. Really, it's as much a miracle that the vinyl medium works at all, as it is for the digital audio paradigm! Both appear (to the uninformed) to be highly improbable solutions to what seems like a very simple problem! The first faces quite ridiculous mechanical problems, while the second faces unfeasibly complicated numerical ones! The difference is that most people can comprehend the basic mechanics of record players by eye, while the principle of digital audio are far from intuitive to most. Neither format can be described as 'perfect' but, for my money, digital audio gets a bit closer than anything else has done up until now. Despite the technical imperfections, though, I still love playing my vinyl records!