I'm at a loss. I cannot get the EVOC PS vocoder to work in Logic Pro 7 on a Power Mac G5 with Mac OSX 10.4.11 — or with anything else, for that matter! Perhaps the 'Help' menu is ambiguous, or maybe there's a crucial step I'm missing — as I found was the case when I tried to import a sample into the EXS24!

SOS contributor Stephen Bennett replies: Vocoders work by taking an input, such as the sound from a microphone (the 'modulator') and imposing its envelope onto a synthesizer tone (the 'carrier'). You use the plug‑in's side‑chain input to feed the modulator to the synthesizer section of the EVOC itself. The easiest way to get things up and running is to load EVOC on an Instrument track and select a side‑chain or Vintage Vocoder preset from the plug‑in's menu. You'll see that the signal parameter is set to 'VOC', which indicates that EVOC is ready to receive input via the side‑chain. Connect your microphone to your audio interface — in the screen overleaf it's plugged into input one — and select this input from the side‑chain pull‑down menu in EVOC. Now when you play your controller and sing or speak into the microphone, you should hear the classic vocoder sound. It's important to realise that you'll only hear the results when you do both together! 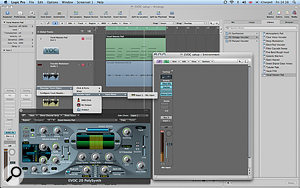 The EVOC Vocoder plug-in itself has been loaded on the Inst 1 (VOC) track, while the audio being used as the modulator is on audio track 1. You can also see the mic input that has been created in the Environment layer on the right of the screen, and how this is then accessible from the Arrange page.While it's fun to play with EVOC live, you'll probably want to capture the results of your vocoding for posterity. The simplest way to do this is to record the microphone input onto a separate track and then use this track as the modulator side‑chain input to EVOC. To do this, create an audio track in the Arrange page, rename it to something useful ('Vocoder modulator', for example) and set its input as the microphone input. I usually place this track under the EVOC Instrument track for convenience. Next, you need to set the output of the audio track as 'No Output' — you don't want to actually hear the untreated voice, and it'll also stop any feedback problems. Set the 'Vocoder modulator' audio track to record‑ready status and select the EVOC Instrument track. If you then press record, hit some keys on your controller and blather away into the microphone, both the audio and the MIDI data for EVOC will be recorded on separate tracks. For playback, you'll need to use the recording on the 'Vocoder modulator' track as the modulator input, so select this track as EVOC's side‑chain input.

To improve the vocoded sound, you can try adding a compressor, EQ or exciter to the recorded audio track itself or to the live microphone input. Increasing the amount of upper frequencies and harmonics on the modulator can really help with intelligibility, while removing low frequencies and adding a noise gate at the end of the effects chain can prevent random noises spoiling your William Orbit impersonations. The modulator input will usually sound pretty horrible, but that doesn't matter, as it's only providing the input for EVOC. You can use these plug‑in effects on the live mic input too — though you'll need to blow off the cobwebs in the Environment to do so. Open the Environment window and create a Layer — call it 'Vocoder input'. From the 'New' menu, add an input channel strip and set its input to the one your mic is plugged into. Rename it to something useful, such as 'Mic input', set its output to an unused bus (in this example I've chosen bus three) and add your plug‑in effects to the channel strip. In the Arrange window, create another audio track and reassign this to the 'Mic Input' channel strip you've just set up in the Environment, either by Control‑clicking or right‑clicking on the track's name in the track list . Finally, set the input of the 'Vocoder modulator' audio track to bus three. Now when you arm this audio track it will take its input from the 'Mic input' channel strip complete with effects. Once you've recorded the processed audio, you can use it as the side‑chain input to EVOC on playback.

Of course, you don't need to use a microphone or a voice as the modulator input. You could use guitar, or drums, or even whole tracks — either recorded or live. EVOC can also be used as an unusual synthesizer when the Signal parameter is set to 'Syn'. There's an article in the Sound On Sound archive about EVOC at /sos/mar07/articles/logictech_0307.htm.