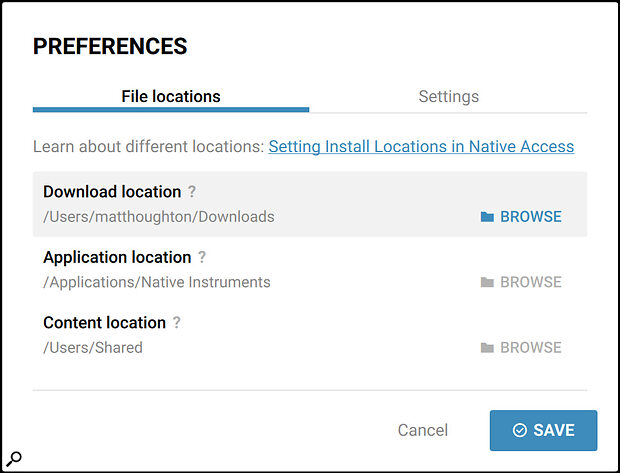 If you’re short on drive space and want to install Native Instruments libraries on another drive, don’t forget to change the download location as well as the content location.

I have a smallish system drive (250GB SSD) for Windows 10, so I got a separate 1TB drive to use with Native Instruments Komplete and told NI’s Native Access installer app to put the plug‑ins/apps on the system drive and the sample data on the external drive. I set Native Access to download a bunch of libraries and left it to do its thing overnight. I came back to find a message telling me that there’s not enough space on my drive to finish the installation — which clearly there is! I’ve tried Google, but no luck. What’s going on?

SOS Reviews Editor Matt Houghton replies: The first thing to say is that if the advice that follows doesn’t work, you really should contact Native Instruments’ support staff to figure out what the problem is; they should be able to help. That said, I suspect I know what’s happening, because I’ve previously run into a similar issue myself.

To install its libraries, Native Access needs first to download the library’s installer and then to unpack and run it — at which point it copies the data to the specified location. This requires pretty much double the space that the installed app‑plus‑samples will occupy on your drive (give or take a bit of data compression). Now, it would obviously still take a good few libraries to half‑fill a 1TB drive but, while I notice that you’ve mentioned changing the default location for installing the sample data, you’ve not mentioned anything about the download folder.

By default, everything is initially downloaded onto your system drive and on a relatively small drive (say 250 or 500 GB) with other apps and data on there, you can soon run out of space when installing multiple libraries in one go.

To free up space for the installation process, either you need to reserve enough space on your sample‑library drive and tell Native Access to save its initial download files there, or when downloading and installing the instruments, do so one at a time, and make sure you delete any temporary downloads before installing the next one.