In the past few years, it seems that I have to work much harder to get things to sit properly in a mix — to get the vocal or horns to just blend with the rest of the track, rather than feeling 'stuck on top', for example. What has crossed my mind is that I rarely (if ever) seemed to find this an issue when I was working purely in the analogue realm. Was I being helped by the losses in the analogue system to blend the sounds? Is it harder to blend multitrack recordings in the digital world? I'm a musician, really, but I think I've improved as an engineer over time, so I should say that I'm not a total klutz at this. I do usually manage to get things to blend, but it does take effort. Do you have any tips for improving the situation?

SOS contributor Mike Senior replies: There are a lot of good reasons why recordings made entirely in the analogue domain often seem easier to glue together at mixdown. The compression side-effects of the tape recording medium often help to tame over‑spiky transients (especially on drums), which can be difficult to tuck into the mix otherwise. The progressive high‑frequency loss that tape‑recorded signals suffer after multiple playbacks helps push sounds further away from the listener too; the brighter a sound, the more it tends to pop out of the mix.

Background noise is an inevitable side‑effect of working in the analogue domain — not just on account of the tape itself, but also because of contributions from all the other processing equipment — and this combined noise floor usually makes it easier to blend a mix. To quote producer Steve Churchyard (in Howard Massey's book Behind The Glass), "Tape hiss doesn't bother me at all, never did. It's like the glue that holds the record together”. A little added distortion is also unavoidable in analogue setups, and this can be turned to advantage by experienced recording engineers to make sounds fuller and more present. Such sounds don't need to be faded up as high in the mix and are, thus, easier to balance.

One other factor a lot of people forget regarding analogue productions is that compression is more often done while recording, to make the best use of the tape's dynamic range and the available gear resources, and then many of those parts may be further compressed at the final mix. This kind of serial compression is typically better at levelling out performance levels than a single, more heavy‑handed, processing stage, so that can also affect blend and the overall sense of naturalness.

There are other factors that contribute to the analogue sound, but that's enough to be going on with at the moment! Let's start looking at how you can try to get similar effects in the digital domain. The bottom line is that you can't expect to use all the same techniques you used for your analogue mixes when working on an all‑digital production. So, for example, I normally find that I do a lot more work with tape emulation, saturation, clipping and specialist transient processors when mixing digital recordings, in order to bring the typically less‑rounded transients under control. Tape emulations are, of course, an option here also.

Adding background noise artificially can also help achieve more analogue‑style blend, and if you don't fancy sourcing your own noise recordings, there are a lot of places you can find suitable samples. Most media sound effects libraries have a selection of what are usually called 'room tone' or 'room ambience' files, which are the sound of nothing happening in various common environments; not the most interesting sounds, but they really help to make tracks feel as if they're all occurring in the same place. Vinyl noise is another good option, and I've found good examples in many sample libraries. Spectrasonics' Retrofunk (www.spectrasonics.com) and Tekniks' The Mixtape Toolkit (www.tekniks.co.uk) spring to mind immediately, but there are lots of others. The Swedish developers Retro Sampling (www.retrosampling.se) have made background noise something of a speciality, and you can get whole CDs full of different vinyl noises from them, plus they also do freeware Audio Impurities and Vinyl Dreams VST plug‑ins, which give a small taster of what their product range has to offer. There are other plug‑ins worth a look too, such as Izotope's Vinyl (www.izotope.com) and Cubase's built‑in Grungelizer, but be aware that some of these don't output everything in stereo, and mono noise won't help the blend nearly as much in this application. One other freeware plug‑in that you might try is Tweakbench's Field (www.tweakbench.com), which provides a selection of mixable room tones./BodyI> 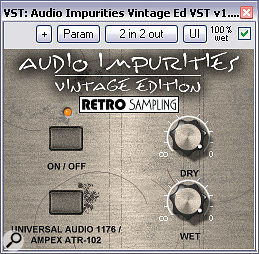 Finally, it's pretty easy to create serial compression digitally, given the practically limitless plug‑in slots most sequencers are endowed with. My basic advice here is to use slower and gentler compression settings for the first compressor in the line, just to even up the levels, and then use faster and heavier compression only further along in the processing chain. If you do it the other way around, the fast compressor will usually cause too many audible processing artifacts, while the slow compressor won't have much dynamic range left to work with.