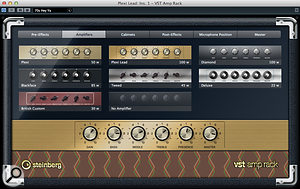 Guitar players, myself included, often argue over the tonal merits of real amps relative to virtual ones. But whatever your views on plug-in guitar-amp simulations, you can't deny that they present some very useful possibilities, not all of which are confined to guitars. So this month we'll explore a few examples of how the VST Amp Rack, which was introduced in Cubase 6, can be put to good use.

To use the VST Amp rack for guitar tones, you'll first need to get a DI signal from your guitar into Cubase. Most modern audio interfaces have an input or two that can work quite happily with a direct guitar-level signal, but if yours doesn't, you'll need a DI box that can send one signal 'thru' to your amp and another to your interface's mic input. You can choose to record this DI signal alongside the output from an amp or hardware modeller, in which case the DI and amp signals should be recorded on separate Cubase tracks, to give you flexibility later.

The VST Amp Rack's primary function is, of course, to create some decent guitar tones. You have seven amp and six cabinet choices which, as hinted at by the graphic styling, include models based upon three Fender classics, a couple of Marshalls, a Vox and a Mesa Boogie. You can combine the different amp and cab types to give you quite a wide range of tonal starting points.

All the amps are capable of decent clean tones, but the best choices are probably the Fender- and Vox-based models. For super-clean, back off on the gain settings or, for a bit more twang (via the Tweed amp) or grit (for example, via the Vox amp), start with the gain about halfway and adjust to taste. With a little more gain, or the addition of an overdrive pedal in a pre-effects slot, you can create a range of 'just breaking up' tones — perfect if blues is your thing. The Plexi model can also do this at lower gain settings, while for straight 'rawk', both Plexi models can do the business. For a more saturated overdrive, the Plexi Lead and Diamond (Mesa Boogie) models are your best bet.

You also get a decent selection of emulated stomp-box effects that can be placed pre- or post- the amp/cab modelling, a choice of microphone type and position and a 'master' section with EQ, a tuner and master output level control. In short, for a bundled plug-in this is a pretty decent package!

So that you can hear the differences between the various models, I've created some short audio examples, and these are available via the SOS web site (/sos/sep12/articles/cubasemedia.htm) for you to audition. In addition, there are audio examples to illustrate each of the VST Amp Rack applications described below. Hopefully, listening to these while reading the text will give you a better idea of what can be achieved. 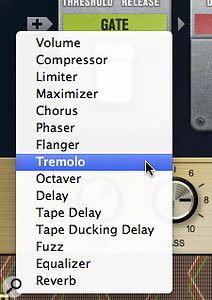 For both corrective and creative applications, there's a good selection of virtual stomp boxes.

It's one thing creating the perfect tone for while you're playing the guitar, but at mixdown you might find that your chosen sound is inappropriate. For example, you might decide the original sound requires more or less gain in order to sit well in the mix. In a traditional recording environment, a DI signal is often recorded alongside the miked amp so that, at mixdown, this DI signal can be fed back to the same or a different amp, the tone tweaked to best fit the mix, either by tweaking the amp settings or changing and moving microphones, and then re-recorded to replace the original. While the results can sound great, this technique can be a bit of a faff — and one of the key advantages of plug-in amp-sims like VST Amp Rack is that they make the process a breeze to perform: you already have your DI'ed guitar part, so you just change the Amp Rack settings to suit the mix.

Another common traditional recording technique is to layer several guitar sounds using different amps, blending the sounds as desired at mixdown to create a fuller tone. With VST Amp Rack, the same effect can be achieved very simply by duplicating the track containing the DI'ed recording and adjusting the amp settings on each track to taste. There's nothing (other than computing power) to stop you from layering as many tones together as you want, if it gets the job done, although usually things will start to sound mushy if you stack more than three or four parts.

While a 'wall of sound' is one application of this approach, a subtler one might be to blend a cleaner sound with an overdriven or fuzz-style sound. When using a heavily overdriven tone, the part as a whole might leap out of the mix, but you pay a price, in that note definition can often be lost. Blending in a cleaner tone can provide the transient information that helps listeners pick out each note without compromising the overall tone.

For example, if you were using a high-gain Diamond amp for your main sound, you might blend in a much cleaner Plexi-based amp tone to add some clarity. The second tone needn't be ultra clean for this to work, just clean enough to have better note definition; and it only needs to be blended in quite subtly, otherwise it becomes obvious that there are two very different tones in use. A further trick is to quite aggressively filter the low frequencies out of the cleaner tone, so that it's only providing aural cues that notes are being picked, but without intruding on the frequencies that define your fuzz tone.

An alternative — or complementary — technique is to insert an instance of Cubase's Envelope Shaper after the Amp Rack on the more distorted sound, which will help emphasise the attack portion of the cleaner sound. 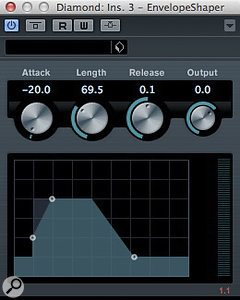 As described in the main text, the Envelope Shaper can be used when blending a cleaner tone with a more distorted one.

The VST Amp Rack can also be used very effectively to fake double-tracked guitar parts. Again, copy the DI part to two tracks, pan each hard right and left respectively, and insert an instance of VST Amp Rack on each. The two tracks can be given different guitar tones, to create the illusion of two different guitars playing exactly the same part. You can create radically different sounds if you want, but the differences can also be quite subtle. For example, try simply swapping the default speaker cabinet model for one of the alternatives. If you also apply just a little nudge to the Inspector's Track Delay for both tracks (perhaps bring one slightly forward in time and the other slightly back) you can create a much more convincing impression of two guitars being played. Just make sure that the sound works when listening in mono, if you do this.

In a similar vein, it's also possible to take a section of your guitar performance, move it to a different track, and treat it to a completely different guitar tone. A typical example might be to transform a part that is overdriven (try the ZZ Bottom preset) for the majority of the track into something much cleaner or with some sort of 'ear candy' type special effect (the heavily flanged 'Purple Gain' preset, for example) for use in a breakdown section of the song. This kind of marked contrast can add interest for the listener.

The sine waveform line tool is great for creating automation data for the wah pedal.

All the VST Amp Rack's parameters can be automated, most easily using Cubase's Quick Control system, so you can vary your tone in different song sections if required. An obvious target for automation is the Amp Rack's wah pedal. Unless you have a MIDI volume pedal that can be used to send controller data while you are playing, you have to resort to adding suitable controller data after recording the DI signal. This actually works quite well, and provides plenty of control. However, for a funky auto-wah effect, you can use the sine waveform line tool to create automation data first (in the screenshot, this has been drawn with a quarter-note grid setting so the wah syncs with the song tempo) and then record your performance while Cubase controls the wah pedal for you. There are, of course, other automation tricks you might use such as varying the amp gain between different song sections, to help create dynamics in the production.

The Guitar Is Not The Star

The VST Amp Rack can also be used as a send effect alongside your more usual reverb or delay processors.

In record production, guitar amps regularly get used for more than just guitar duties: almost any sound source might be processed through a guitar amp to add a little warmth or overdrive. Obvious candidates are keyboard sounds (such as rock organ) and vocals, to give a little grit. A plug-in virtual amp like Amp Rack makes this sort of experimentation quick and easy. There are two approaches you can adopt. First, if you want a full-on effect, simply place the plug-in as an insert effect on the track (or on the audio output channel if it is a software instrument you want to process), just as you would with a guitar.

The second approach, which will often yield more pleasing results, is to set up VST Amp Rack as a send effect. You can then use a parallel-processing approach to blend in just as much (or little) of the amp processing as required, and automate the send level to create any variations you might like in different song sections. This can, for example, be a great way to add just a tiny amount of edge to a vocal to lift it out of a busy chorus section mix. The key here is to experiment with various sources to see what effect you can achieve, and you might be surprised — I've even had good results using amp sims in parallel to add body and sustain to a wimpy snare drum, blending it with the original sound that provided the transient which identifies the sound as a snare.