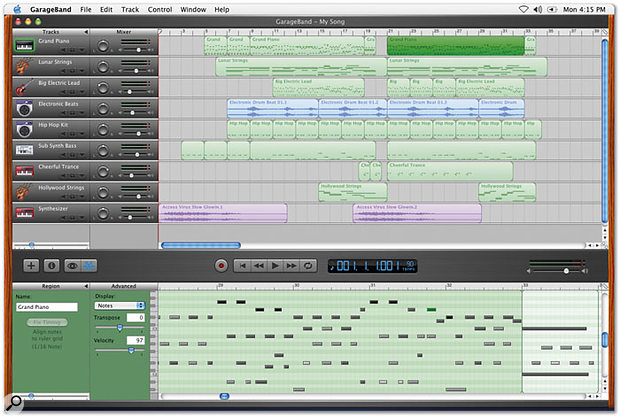 Garage Band uses a one-window interface. Here you can see the selected MIDI part from the main arranging area being edited in the lower editor section.

We take a look at the newest member of Apple's iLife suite and discover that youthful looks, adolescent attitude and long hair are not required to join this Garage Band.

Ever since Apple purchased Emagic towards the end of 2002, Mac users had been speculating about the arrival of an 'iLogic'-type application, a cut-down version of Logic that would do the same for music-making that iMovie did for home movie production. At the start of 2004 rumours were stronger than ever that Apple would introduce a new music application, and while many in pro circles thought this would compete with Pro Tools, it turned out to be the long-awaited 'iLogic' app. But its name isn't iLogic, and in fact doesn't feature the letter 'i' at all. As you may already have heard, Apple's entry-level sequencer is called Garage Band.

Wanna Be In My Band?

Garage Band has already enjoyed much publicity in the mainstream press, and while it may initially be easy for musicians to turn their noses up at a 'junior' sequencing package, it doesn't take long to realise that what Apple/Emagic have done with Garage Band might be special. Although it benefits from Logic technology, Garage Band 's user interface has been design

One of the big problems Apple faced in applying the iLife strategy to music-making is how to make music production as simple as movie production. After all, while anyone can point a camera and capture video footage they'd show to their mum, not everyone can plug a guitar into their Mac and play something they'd want to share with others. So Garage Band supports three composition methods: MIDI sequencing, audio recording, and loop-based production in a similar vein to Soundtrack.

For its MIDI sequencing, Garage Band utilises either Software Instruments or Audio Units as playback devices — so you can't use external MIDI devices to play compositions. However, this isn't a huge problem, as the application is supplied with around 50 instruments, which play from a collection of sample and synth-based modules built into the program. The quality of the supplied instruments is quite surprising: we're not talking Vienna Symphonic Library, but there's a very usable collection of sounds that play well together.

The piano is respectable, the strings not bad, synths and basses are pretty good, electric pianos are nice, and even the guitars are very playable, with bends built in and appropriate fret noises. The only really bad sounds, for me, are the horns and the Music Box — the instrument they sampled might have been dropped at some point! Overall, the sounds are probably best considered by Logic users as a step up from the original EXS24 factory library.

Laying Down A Track 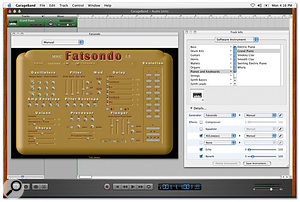 Audio Units support allows extra software instruments and effects to be added.ther to switch audio monitoring on. Most track settings can be altered later by double-clicking a track and changing parameters in the Track Info window. It's in this window that you can add extra effects to tracks, including a decent guitar-amp simulator.

Once you've recorded some parts (simply press record and play something), objects start to appear in the arrange window, and these can be moved, copied, resized and cut, as you'd expect. A simple audio or MIDI editor can appear in the lower half of the window. There's not too much you can do with audio objects, but the piano-roll MIDI editor lets you manipulate notes as you would any other object, and adjust transposition and velocity. There's a simple quantise function behind the Fix Timing button, and you can even switch from editing notes to controller data.

Loop-based tracks are created by clicking on the Show Loop Browser icon, and dragging a loop from browser to arranging area, where Garage Band creates an appropriate track. The Loop Browser makes it easy to search for appropriate loops using preset keywords, or you can enter free text if you know what you're looking for. Since the Apple Loops format keeps track of tempo and key info, Garage Band tries to make the material work for the song you're creating, which it can do since you're forced to assign a key signature to a song when you're starting from scratch.

Support for the Apple Loops format is growing amongst third-party developers, and Access even offer a free collection of Apple Loops recorded from their Virus synth as a free download from www.access-music.de. Apple supply Garage Band with 1000 loops, and 2000 more are available in Jam Pack, a $99 add-on pack which also offers 100+ new instruments and 100 effects.

Perhaps the neatest feature of Garage Band is the simple Export to iTunes command, which automatically places a stereo mixdown of your song into a playlist in iTunes. There are no controls for setting encoding parameters, but being able to conveniently use Garage Band songs with iMovie, iDVD and iPhoto is neat; and you could always drag the file straight to your iPod. What I like about these features is that Apple have taken the hard work out of getting a project from Garage Band into an iPod, for example, and I wouldn't mind such a feature in Logic if it gave more control over encoding.

While it might not be immediately obvious, Garage Band supports Apple's Audio Units (AU) plug-in format for adding effects and instruments. Adding an Audio Unit as an effect to a track is easy. Double-click on the track, and in the Details section of the Track Info window, where the effects list is located, two pop-up menus allow you to choose an AU effect or one of Garage Band 's own effects. There's an additional pop-up for choosing presets in the Details section, and a button to open the effect's editor window. However, it's worth noting that you can only have one such window open at a time, including the editor windows for AUs.

To use an AU instrument plug-in, first create a Software Instrument track (it doesn't matter which instrument you choose). Then double-click the Track to open the Track Info window again and in the Details section look at the Generator pop-up menu. The Generator is the Software Instrument module producing the sound for a given track, and in the pop-up you'll notice the list of modules supplied with Garage Band that produce the preset sounds, plus any AUs in your system.

While any AU you might use as an instrument will probably have its own editor window for customising sounds, each Garage Band instrument module also has an editor window where you can tweak parameters, and even save your own presets or instruments. (Presets only show up in the preset list for a selected module or plug-in, rather than being displayed in Garage Band 's main list of Software Instruments.) In such an entry-level package it's surprising to see reasonably comprehensive support for tweaking parameters, using plug-ins, and saving custom instruments and presets.

Sequencing For The Rest Of Us

I really like Garage Band, mainly for the intuitive nature of its user interface. Anyone who's used a sequencer will figure it out in 10 seconds, but you get the impression the designers took a step back and considered how to make a sequencer easier to use for the rest of the world, without crippling it such that experienced musicians would find it unusable. This is an easier thing to do when you're dealing with a limited feature set, and Garage Band certainly isn't perfect, but on the whole I think the concept is really good and may introduce a wider audience to computer music making, particularly in education. I wish I'd had this kind of software when I was much younger!

The only real issue I have with Garage Band is its performance — it's noticeably sluggish on anything but a G5. I spent most of my time using the software on an 'old' 800MHz Titanium Powerbook and maxed out the system with six Software Instrument tracks and two audio tracks, which isn't bad — except that I get better performance in Logic Platinum! However, since the tracks come loaded with a effects by default, such as EQ, Compression, Echo and Reverb, there's a load being placed on the CPU that you're not necessarily always aware of.

The CPU indicator in Garage Band is hidden in the song position marker, which offers traffic-light colours to show the current CPU usage of a song. If this goes red, you might start to see less polite alert messages telling you that you're trying to do too much. I was hoping that the recent 1.01 upgrade might have improved things a little, but so far it seems ironic that you need a professional machine (a Power Mac G5) to get the most out of a consumer-level program.

Garage Band shows that Apple can put out a great music product. As for the company trying to compete with Digidesign in releasing a more professionally orientated app (besides Logic), I'm not sure that we'll see this happen any time soon. For one thing, Apple truly make their money by selling Macs, and since most PT users already purchase Mac hardware, there would seem to be little incentive for Apple to compete in that section of the market. Unless we see a trend towards more Windows-based Pro Tools workstations, for music composition at least, the Garage Band, Logic Express and Logic Pro line-up looks pretty good from where I'm sitting.