Apple Mac Pro: How Powerful Is It? Skip to main content

Apple Mac Pro: How Powerful Is It?

The current top-end Mac Pro offers so much power that some audio software is playing catch-up just to be able to make use of it all. But how much power? We run some tests to find out.

It's been almost two years since Apple replaced the PowerMac G5 with the Intel-based Mac Pro, and as Apple's high-end desktop system the Mac Pro continues the PowerMac's legacy as the system of choice for musicians and audio engineers requiring the ultimate performance. While its chassis remains the same as the PowerMac G5 when introduced in 2003 — disappointingly unsuitable for easily mounting in a rack — Apple continue to provide the latest components on the inside, making the Mac Pro one of the most capable workstations available, no matter whether you run Mac OS X or Windows as your operating system. 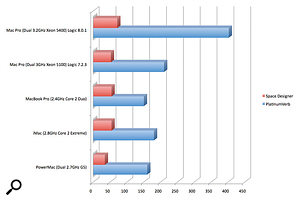 Here you can see how the new Mac Pro performs relative to other Mac systems.We briefly covered the introduction of Apple's latest range of Mac Pros, which make use of Intel's latest Xeon processors, in March's Apple Notes (www.soundonsound.com/sos/ mar08/articles/applenotes_0308.htm). Available with clock speeds of up to 3.2GHz, among the highlights of these new chips is that each processor has a 12MB Level-2 cache and operates on a 1600MHz system bus, which ought to provide fairly good performance for power-hungry music and audio software. To find out for sure, this month I got my hands on a top-of-the range, dual quad-core 3.2GHz Mac Pro with 16GB memory, Apple's optional SAS RAID card, and an Nvidia GeForce 8800 GT graphics card with 512MB memory.

To begin with, having 16GB of memory installed in the Mac Pro is probably overkill for current music and audio applications, all of which are still 32-bit, meaning that the maximum amount of memory accessible to each is around 3GB. Even taking into account the fact that Logic Pro 8's EXS24 sampler can now address more than this allocation, for pre-loading samples that are to be streamed from disk using the plug-in's Virtual Memory feature, 8GB would probably be a more sensible amount in terms of price and performance.

If you use your Mac for other, non-musical tasks, such as running virtual machines or a number of other, memory-hungry applications simultaneously, more RAM is always a bonus. And if you really want a huge amount of memory, it's now possible to install up to 32GB, which will admittedly add £5760 to the cost of your Mac Pro from the Apple Store, which comes with 2GB as standard. 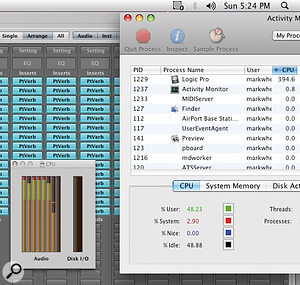 Activity Monitor is a useful way of checking how much of your Mac's resources your applications are making use of, even when such applications report a system overload. Logic Pro's use of multiple cores is somewhat quirky, as you can see here. While all eight cores are displayed, notice how in this situation the eighth core itself is apparently completely free, even though the Project is rather busy.To test the performance of the new 3.2GHz processors, I installed Logic Pro 8.0.1 (the Mac was running OS 10.5.2) and ran the usual assortment of reverb and instrument performance tests using the built-in audio hardware with a buffer size of 512 samples.

Starting with PlatinumVerb, I was able to run 402 simultaneous instances, which is quite an improvement over the 210 instances possible with the original 5100-series quad-core 3.0GHz Mac Pro reviewed back in December 2006 (www.soundonsound.com/sos/dec06/articles/macpro.htm). Using the stereo version of Space Designer, I managed to run 71 instances, compared to 52 instances on the earlier 3GHz Mac Pro.

Moving along to EXS24, using the old favourite VSL Harp instrument, with the Original Storage setting and the filter and Virtual Memory disabled, I was able to play back 2176 stereo voices simultaneously (compared to 1856 voices on the earlier Mac Pro). However, enabling 32-bit storage caused this number to rise to 3840 voices, which isn't bad (over the earlier 3200 voices). However, it's worth remembering that 32-bit storage requires more memory than storing the samples in the 'original' 16- or 24-bit format, and to achieve this level of performance you have to disable Virtual Memory, which, as mentioned above, has to be enabled for the EXS24 to see more of your Mac's memory.

These numbers seem very impressive, but it's interesting to note that while most of the time computer hardware has to catch up to the demands of what a user wants to achieve with software, we're now reaching a point where the software's having to catch up with the hardware. Let me elaborate.

You might have noticed that I've left out a set of numbers normally included with the performance benchmarks: the Process and User CPU usage percentages reported by the Activity Monitor utility. The Process percentage indicates how much of the available CPU resources are taken up by a given application, such as Logic Pro or Nuendo. With this value, 100 percent equals one processing core's worth of resources, so an application running on an eight-core computer could theoretically use a maximum of 800 percent. The User CPU percentage reports how much of the CPU resource is being utilised by Processes (or applications) that have been launched by the user. With this figure, 100 percent represents the total amount of CPU resources available.

Going back to the PlatinumVerb test, 402 instances ran with Logic Pro, using 394 percent CPU and 48 percent User, while in the RoomWorks test 119 instances ran with Nuendo, using 633 percent CPU and 78 percent User. If you compare these figures, you'll notice that Nuendo is clearly utilising more of the available resources than Logic Pro. In a perfect world, you would hope for a linear improvement in resources, where two cores would run twice as many tasks as a single core, four cores would run double the number of tasks as two cores, and so on. But it isn't a perfect world, and the reality is that there's both a limit to how tasks can be split across multiple cores, depending on how complex the audio routing is for your Project, and an overhead in the computer and application having to schedule tasks for multiple cores.

Taking these factors into consideration, I think Nuendo does a pretty good job. However, as has been mentioned many times in the past, it seems as though Logic's audio engine would benefit from some improvement to its handling of multiple cores. Which is, of course, easier said than done.

Aside from the processor and memory improvements in the Mac Pro, the storage system has also been improved, such that you can now order it with Apple's RAID card, which was previously only available with an Xserve. Using this card, you can now configure a disk array in your Mac Pro that works at a hardware level, for better performance compared to using OS X's built-in software RAID functionality, and supports SAS (Serial Attached SCSI) drives instead of SATA, which also offer improved performance.

In next month's Apple Notes we'll be taking a closer look at the new storage options available in the Mac Pro and asking whether the additional cost of the RAID card and SAS drives is worth the extra performance yield when working with audio.

As with this year's NAMM show, Apple declined to exhibit at the 2008 NAB (National Association of Broadcasters) show, held annually in Las Vegas for the broadcast and video industry. In recent years Apple have maintained a significant presence at the show, using it as a platform to announce products such as Final Cut Studio and the 17-inch MacBook Pro. But this year the company feel there are better ways to reach customers, with initiatives such as the Final Cut World Tour, a series of seminars held in various cities around the world to demonstrate the potential of the Final Cut Studio workflow. See www.apple.com/

finalcutstudio/tour for details (but note that London wasn't on the itinerary at the time of writing. although it may have been added later).

Despite not exhibiting at NAB, Apple did release Final Cut Server, originally announced at last year's NAB show, at the same time as this year's exhibition. As the name suggests, Final Cut Server is a server software application for Final Cut Studio users that facilitates both media asset management and workflow automation amongst multiple users. What this means, for example, is that if you have an editor working on a project in Final Cut Pro, Final Cut Server makes it easy for him to send a clip from that project to an artist working in Motion (or perhaps an audio engineer working in Soundtrack Pro), and then have the Final Cut project automatically updated when the artist is finished.

Final Cut Server can work over a SAN (Storage Area Network) environment, such as Apple's own Xsan software, where all of your video assets stay on the SAN and play back directly on your desktop system. Alternatively, you can opt to have a version of the project copied directly to your computer and then copy any changes back to the server later.

I managed to see a demonstration of Final Cut Server this month, and it seems like a promising system, adding functionality that was sorely missed in the Final Cut ecosystem, with Apple once again doing a great job of putting a user-friendly interface on a potentially complex application. What's particularly interesting from a technical perspective is that the client-side application is written using Java (as opposed to Apple's own Cocoa framework), since it can also run on Windows-based systems, and this may be the best-looking Java application ever written! While the client is cross-platform and effectively freely distributable, the server application that manages data and provides the core functionality is Mac only and is available in two versions: a 10-client version for £699 and an unlimited client version for £1399.

At the moment, Final Cut Server is obviously aimed at Final Cut Studio users, and although the system can work with any type of file, including audio files or any other type used by music or audio software, only Final Cut Pro files are handled natively (in the sense that the system can know exactly all of the assets used by a given project). It's also worth bearing in mind that such asset-management systems are designed for situations where you have multiple people working on different aspects of the same project. While this type of workflow is fairly common in video post-production, it doesn't happen in quite the same way in audio, even for larger facilities. That said, it will be interesting to see how Apple develop the software in the future, especially as Soundtrack Pro continues to address the needs of the audio post-production market.