The Worldwide Developers Conference always brings exciting announcements. We take a look at the headline grabbers...

At this year's Worldwide Developers Conference, Tim Cook kept the promise he made concerning the Mac Pro at last year's event — that Apple was "working on something really great for later next year” — with the announcement of a new Mac Pro! However, in a highly unusual move for the company, rather than presenting a full product introduction, Apple's Senior Vice President of Worldwide Marketing, Phil Schiller, instead offered a "sneak preview” of this new Mac catering to the needs of creative professionals, specifically mentioning musicians in his list of target audiences. 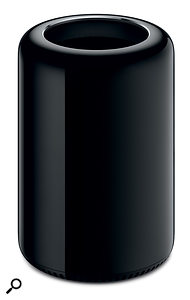 The surprising design of the new Mac Pro won't necessarily please those wanting to rack their machine or, indeed, those hoping for more expandability. 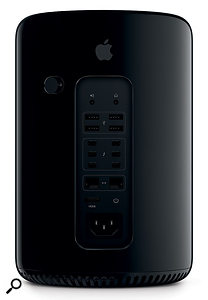 As one might expect, the new Mac Pro features the latest technology: Intel E5 Xeon processors, dual AMD FirePro GPUs with 6GB of memory, flash storage, and faster system memory running at DDR3 1866MHz. Apple claim that the machine is twice as fast as the current Mac Pro, and this is probably true, given that the Mac Pro hasn't been significantly updated in a couple of years. For connectivity, you'll find four USB 3 ports, six Thunderbolt 2 ports (which, offering 20GB/s of bandwidth, are twice as fast as Thunderbolt 1), HDMI, microphone and headphone ports, two Gigabit Ethernet ports, and 802.11ac and Bluetooth 4.0 wireless networking. There's no optical drive, but the real kicker is that this new Mac Pro also lacks internal expansion slots and room for additional internal storage. Apple decided that since professionals obviously don't use the internal expansion and storage options available in the current Mac Pro, the space required for them could be removed, in favour of a sleek new cylindrical design about an eighth of the size of the previous model.

This isn't the first time Apple have shrunk their most powerful Mac into a new and dazzling form factor. Back in 2000, the PowerMac G4 Cube reduced the guts of a PowerMac tower to fit in an eight-inch cube by similarly eschewing the option for internal expansion, but lasted just a year in the marketplace, due to poor sales. However, to be fair, the Cube was designed to sit in between the iMac and the PowerMac in terms of performance as a new product category, whereas the new Mac Pro will clearly offer the performance people expect from a high-end machine. It's just that Apple have sacrificed internal expandability, forcing users into an external Thunderbolt-powered nest of cables and devices.

If you're the kind of user who runs a completely native system — which is to say, the sort of user whose workflow probably revolves around Apple's own 'pro' apps — the new Mac Pro will probably be exactly what you want it to be: a significantly faster system that runs the software you like. You can plug in your existing music and audio peripherals (possibly with the help of a Thunderbolt-to-Firewire adaptor), and get on with business. However, if you're any other kind of user — the sort of person who relies on PCIe cards and internal storage options — the new Mac Pro may be less of a welcome change. Those Pro Tools, UAD or Apogee Symphony cards are going to need a chassis, which will also need its own power source, making a system far less elegant than one would assume Apple intend. 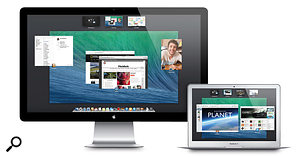 Fully featured, flexible use of multiple displays is one of the big draws of Mavericks.

Before the announcement at WWDC, when asked what they might want from a new Mac Pro, most musicians and audio engineers I know would usually reply that more slots would be handy (to save having to use an expansion chassis), along with the option to easily rackmount the computer. Instead, there are no slots at all (making an expansion chassis mandatory if you want to use PCIe cards) and, well, I can't wait to see the inventive ways that people figure out for racking this new design. If nothing else, the new Mac Pro would be a fantastic way to transform a wine cellar into a data centre.

The problem with the new Mac Pro is that Apple are forcing a change upon creative professionals with which they won't necessarily be happy. While portable (and possibly consumer desktop) systems gain from losing bulk and weight, professional desktops (dare I say workstations), generally speaking, do not, especially if functionality is lost for the sake of aesthetics. And, while Apple have made similar manoeuvres in the past, trying to get users to either switch to completely native systems or use external peripherals that previously had a home inside their systems seems a little more aggressive than removing the floppy drive or switching from ADB and serial ports to USB. For some users, this won't be an issue; they'll be able to enjoy the power and the design. But for others, especially those in larger studios and post-production facilities, the second word in the Mac Pro's product name will seem more Project than Professional.

To go with the new and fearsomely powerful Mac Pro, there'll be an autumn release of a new version of OS X called 'Mavericks'. This marks the end of the big cat nicknames, and refers to a Californian surfing location.

Meanwhile, around the same time, iOS is going to version 7, with a root-and-branch visual redesign that minimises needless infrastructure such as header bars and 'window' surrounds, and promises to make using the operating system a more informative and transparent experience.

Both new operating systems largely do away with widely disliked 'skeuomorphic' elements (such as the faux leather and paper of their Calendar apps). While many new features and enhancements will be most noticeable during everyday tasks, like web browsing, there are several interesting developments afoot that could have an impact on typical studio and recording use.

On the Mac, OS X Mavericks sports a hugely improved Mission Control that, at long last, handles multi-display setups properly, allowing truly independent 'spaces', each with their own dock and menu bar (so you'll no longer need some of those third-party utilities I described in last month's column!). Moreover, it will let you run full-screen apps next to conventional desktops, or multiple full-screen apps side by side, with drag-and-drop support between them. This alone could be worth the admission price. Then there are two intriguing system-level enhancements that could prove really beneficial.

A Compressed Memory scheme promises better RAM availability and faster performance. Essentially, it cuts how often OS X has to offload a chunk of its memory contents to disk— which is a slow process — by compressing it instead. Memory throughput rates are said to be improved by as much as 40 percent, and you get more free RAM at the same time. Bonus!

Also interesting is a feature called Timer Coalescing that Apple say can cut CPU activity by anything up to a whopping 72 percent in some circumstances. This intelligently groups together calls on the processor (or 'interrupts') that are made by running applications, rather than letting them just occur arbitrarily. The result is a net increase in CPU idle time, which should definitely yield improvements in battery life for laptop batteries. Who knows, it may even help with CPU hit for intensive processing tasks.

Flexible file-tagging in the Finder points the way to a future of data storage that is increasingly cloud-oriented and no longer reliant on traditional folder structures for organisation. Tabbed Finder windows should benefit us all, too, as will an App Store that is able to automatically update installed software in the background.

The iPad-based musician will arguably find less in iOS 7 that directly benefits them, but there are still fascinating developments to appreciate. A new approach to multitasking potentially allows any kind of app (not just music players and the like) to run at full tilt in the background if the OS notices an appropriate usage pattern. However, since we already enjoy reliable multitasking in conjunction with multiple Audiobus-enabled apps, for example, perhaps this is a benefit that will mean more outside the music sphere. What is definitely nice is a far more informative application-switching system. A double-tap of the home button in iOS 7 shows whole-window previews for running apps, as well as just their icons, and that really should dovetail nicely with Audiobus's own switcher facility.

The Mac Pro wasn't the only hardware announcement at WWDC. A refreshed MacBook Air range introduced Intel's 'Haswell' processor for the first time. This is the latest generation of the Core i5 and i7 chips that Apple have used for a while now, and, with the help of powerful integrated graphics, they achieve more per processing cycle than ever before. Consequently, the new Airs out-perform their predecessors (according to benchmark tests such as Geekbench), despite a markedly lower clock speed of only 1.3GHz (down from 1.7 or 1.8 GHz) for the standard dual-core i5. All of this bodes very well for when even more capable, faster, quad-core Haswell chips make it into the MacBook Pro, iMac and Mac mini ranges, which will surely be sooner rather than later. Robin Bigwood