This month, we take a look at some great little apps for problem solving.

There are some really useful utility apps available for the Mac that can enhance or extend your normal DAW experience. Here's a quick roundup.

Audio Hijack Pro excels at one thing: recording the audio output of any application. It'll record Skype conversations, YouTube audio from your web browser, soundtracks from DVD Player, and so on. Need a computerised voice for a song? You can 'hijack' the TextEdit application, then use the Start Speaking command from its Edit menu to read out text.

Audio Hijack Pro outputs MP3, AAC, Apple Lossless, AIFF and WAV files, so it's easy to drop the recordings it makes into your DAW. It's very easy to use, and the downloadable demo version is essentially fully featured for hijacks and recordings lasting less than 10 minutes.

The app costs $32 and requires OS 10.6 or later. Go to www.rogueamoeba.com for more information. 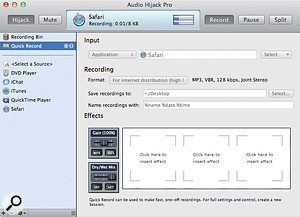 Audio Hijack Pro lets you record audio from any application on your Mac.

Let's say you want to route system audio into an audio track on your DAW, so you can record it; Soundflower can do this. That's similar in principle, of course, to what Audio Hijack Pro does, but in real time, and with no interim sound files involved.

With Soundflower installed, your Mac, DAW and other audio applications see it as if it were just another audio interface. There are two-channel and 16-channel variants to cater for simple and more complex needs. To stream your Mac's system audio into your DAW, you'd go to the Sound pane in OS X's System Preferences and choose 'Soundflower (2ch)' in the Output tab. Then, in your DAW, you'd configure Soundflower (2ch) as your audio interface, create an audio track with Soundflower as an input, and record when ready.

Easy! Well, maybe not so easy. In the scenario I just described, you could record the Soundflower input stream just fine, but you wouldn't be able to monitor it. That's because most DAWs can only address one audio device at a time, and of course you've previously had to deselect your usual audio interface. The solution is to dive into OS X's Audio MIDI Setup application, and in the Audio window create an Aggregate device that includes both your usual interface and Soundflower. Then configure your DAW to use that, and you should be able to record the Soundflower stream while monitoring through your usual hardware outputs.

Soundflower is a free open-source tool and requires OS 10.2 or later. For more information, go to www.cycling74.com/products/soundflower.

Being able to send audio over a wireless network is potentially very useful. If you have a recent Apple TV or Airport Express connected to a domestic hi-fi system, for example, you could send your DAW mixes to it, to audition them on a different monitoring setup.

Users of OS 10.8 (Mountain Lion) on Macs from mid-2011 or later have something of this sort available immediately. Apple's AirPlay network audio and video streaming feature means that system audio can be routed to any AirPlay-compatible devices just by choosing them as an output in the Sound pane in System Preferences, or from the list that appears when you option-click the Sound menu item.

An even more flexible solution, for anyone on OS 10.6 or later, is another Rogue Amoeba app called Airfoil ($25). In a spectacularly simple interface, you choose the application whose audio output you want to 'transmit', and then enable any local or compatible network devices that should receive it. iOS devices (such as iPhones and iPads) will also show up in the list if you run Rogue Amoeba's Airfoil Speakers Touch app on them. That's available for free from the iTunes (iOS) app store. 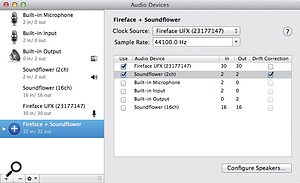 Soundflower works best with most DAWs when you include it in an 'aggregate device' along with your normal hardware interface, in the Audio MIDI Setup application.

When you need to do quick conversions from one audio file format to another, a full-blown DAW is usually not the best tool for the job. Much better is a dedicated app like the excellent Pro Audio Converter ($9.99£6.99 from the Mac App Store, OS 10.6.6 or later). This reads and outputs a wide range of audio formats, edits metadata, happily chews through folders full of files and runs very fast on the latest multicore processors.

Other inter-application audio utilities have been available over the years, but not all have kept up to date with Mac OS developments. Ambrosia Software's WireTap apps were competition for Audio Hijack Pro, but aren't fully compatible with either OS 10.7 or 10.8. It's a similar story for the open-source Jack.