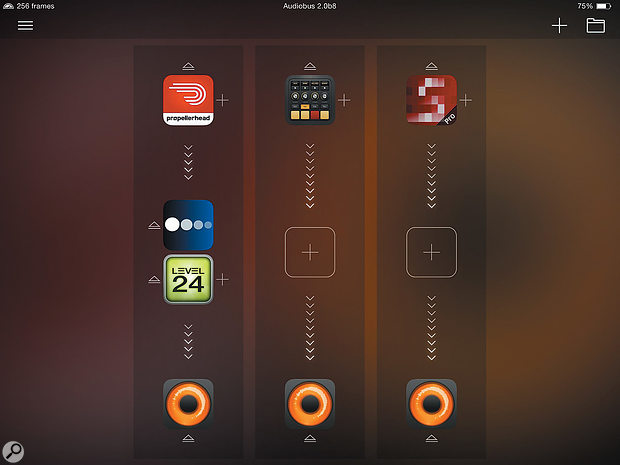 If you thought audio production on iOS was limited, you may have to think again. Audiobus 2 lets you set up many simultaneous, independent audio routings between apps, and then save and recall them with a new preset system.

The new version of Audiobus is really going places. All aboard!

In December’s Apple Notes column I discussed iOS 7’s inter-application audio, which many apps are now supporting. It lets them establish virtual audio connections, and allows effects-type apps to be used as plug-ins in ‘hosts’ (like Auria or Cubasis). Inter-app transport controls can be provided too, so you don’t have to keep switching apps when recording one into another. All very exciting, and an interesting and distinct alternative to Audiobus, which had previously been the only real option for inter-application audio on iOS.

Audiobus has always been built around the idea of an Input / Effects / Output audio ‘pipeline’. That kind of signal flow is very intuitive; more so, in fact, than the somewhat nebulous nature of some inter-application audio routings. It’s more flexible than it might first appear too, allowing tricks like having the same app (perhaps a looper like Loopy HD) populate both the Input and Output slots simultaneously, so it can record itself. Version 1 only ever supported a single pipeline, but that felt about right for the level of processing complexity that could be attempted on older iPad models.

Audiobus is about to undergo a major change, though. Teasers for a version 2, with a sexy iOS 7-inspired design, have been around for a few months now and have been discussed extensively at Audiobus’s user forum: http://forum.audiob.us. I was also fortunate recently to speak to Sebastian Dittman, one of the main developers of Audiobus (and the person behind the iOS controller app SoundPrism Pro). The finer details of this milestone update are becoming much clearer.

The headline feature is the support of multiple pipelines; as many as your iDevice can support. Used with a multi-channel audio interface you could, for example, set up many independent live effects processing chains, driven from separate inputs. Or just create two to have a looper or groovebox app running alongside a synth played in real time.

Next, Audiobus 2 is going to let you instantiate multiple effects in each pipeline’s effects slot, and route the whole shebang to multiple outputs if necessary. Version 1 already supported multiple input sources for its single pipeline, so this is a logical extension of its capabilities.

Crucially, also, any ‘connection graphs’ you set up can be saved as presets for later recall, so you’ll no longer have to rebuild your Audiobus routings from scratch each time. Presets can be quickly shared via mail or social networks from within the app, and a lot of thought has clearly gone into this feature. If you open someone else’s preset, and don’t have all the apps it requires, the missing ones appear instead as a link to purchase them in the App Store. A few taps, and a little hit on the credit card, and you’d be up and running.

The new version should be available as a free update for existing users, with the extended routing features unlocked via a reasonably priced in-app purchase. There are still more unannounced features too, aimed at generally improving the Audiobus experience and significantly enhancing preset handling.

Several things seem really interesting about this new release. First, that there isn’t, apparently, any overlap with OS-level inter-application audio, and Audiobus 2 doesn’t explicitly mimic any of its features. Second, that it should be ‘good to go’ at launch with many of the big iOS music apps. Audiobus as a company is well connected to the iOS music scene, and many third-party developers have been on board throughout the development period.

Finally, it was interesting to hear first hand how passionately committed Sebastian (and presumably the rest of the Audiobus team) is to the idea of really serious music production on iOS. His vision is clearly that Audiobus 2 will allow functionality that starts to rival what’s possible with a desktop DAW and plug-ins, and that iOS isn’t just for musical toys and frivolities. Yes, working on iOS might feel very different, but Audiobus 2 and a pageful of good synths, effects and recorders could be the basis for sophisticated production work. It looks like we’ve got some exciting times ahead...