Ableton Live: It's About Time Skip to main content

Ableton Live: It's About Time

1: Very short, different right- and left-channel delay times simulate a flanger-like effect. MIDI CC 1 (Mod Wheel) is assigned to modulate the delay times in opposite directions with different ranges as well as to deactivate the device when the wheel is all the way down. Try it in a fixed position for detuning effects or change it in real time for a moving, flanger-like effect. MIDI CC 11 (Expression Pedal) is mapped to feedback to control the depth of the effect.

We look at what Live’s built-in delays can do for you.

Live’s Simple Delay, Ping Pong Delay and Filter Delay audio effects cover all the basics as well as offering a lot of creative potential, and their similar control panels make them easy to learn. This month we’re going to look at how to get the most out of each of them. You’ll find detailed coverage of two other Live delay-based devices — Grain Delay and Looper — in the January 2012 and December 2013 Live columns.

You can use each of Live’s delays as an insert effect and adjust its wet/dry mix as needed. But when you combine one of them with other effects or use one of them to process multiple tracks, place it on a Return track in Pre mode. The Return volume then controls the delay level while the dry signal, whose level is controlled by the track volume, is not affected by the other effects. (See the ‘Ah-one, Ah-two’ box for a review of how digital delays work, how to convert between note-based and time-based settings, and how to set triplet and swing delay times.)

Simple Delay is the most basic Live delay, but don’t be put off by the name. It provides independent delay times for the left and right stereo channels, and you can specify those times in tempo-sync’ed multiples of a 16th note or in milliseconds. Furthermore, you can add or subtract a percentage offset to the tempo-sync’ed settings. When you don’t need separate left- and right-channel settings, click the Link button and the left-channel settings will be applied to both. But if you manually enter the same settings for both channels, you can apply a different, small offset to each channel for interesting stereo, phasing and flam effects.

You could think of Filter Delay as Simple Delay on steroids. In addition to left- and right-channel delays, there’s a delay for a mono mix of the two channels. You can disable these delays individually, and each delay is preceded by a band-pass filter, which you can also disable. With the filter’s band-width set to its maximum value (9.0) it functions as a low-pass or high-pass filter. Finally, each band has its own feedback, pan and volume controls.

Used as a track insert effect, Filter Delay makes a great room simulator. Use all three channels with delay times in the 1.0 to 25.0 ms range and use little or no feedback. Start with the Pan knobs in their default positions (left, centre and right, respectively), set all volumes at 0.0dB, and then adjust the pan, filter and delay times to taste.

Filter Delay offers plenty of opportunities for interactivity. When enclosed in an Audio Effect rack, you can set up a MIDI key range to step through the sync’ed delay-time buttons by mapping them to a Macro knob and then assigning a range of eight notes to control that knob. (You can’t assign a key range directly to the buttons.) You can also

2: Filter Delay is set up here as an interactive triplets generator; each delay channel has the same note value with triplet offsets for the right and left channels. The delay times for each channel are mapped to the same Macro knob, which is then MIDI mapped to an eight-note key range as shown. Individual keys in the same octave are mapped to toggle each of the delay channels. The frequency for each filter gets its own Macro knob, which at the left and right extremes, turn the filter off. use notes to toggle both the delay channels and the filters, but with the filters I prefer to assign Macro knobs to each of their frequencies and map the knob extremes to turn the filters off, as in screen 2. With a little practice, you can manipulate the delay settings with one hand while playing notes with the other.

Ping Pong Delay has a single delay buffer that is mixed to mono and sent alternately to the left and right channels — the dry audio retains its stereo image. Like Filter Delay, an adjustable band-pass filter is applied to the audio on its way into the buffer. Clicking the Freeze button, located between the Sync and Offset controls, freezes the buffer and turns Ping Pong Delay into a basic looper effect. If you automate the Freeze button with a footswitch, it will activate and deactivate as the footswitch is pressed and released; if you automate it with a MIDI note, that note will toggle the button on and off with consecutive presses.

Alternating playback between the right and left channels gets old fast, but you can obviate that by inserting Ping Pong Delay on a Return track in Pre mode and then using other effects to manage the pinging and ponging. Use a Utility device to narrow and pan the stereo image, to swap channels or to pass only one of them. Auto Pan, which amounts to separate LFOs applied to left- and right-channel volumes, is a very handy effect to use after Ping Pong Delay. Load its factory preset ‘Subtle Stereo,’ increase the Amount control and then manipulate the Rate and Phase or Spin controls to generate different rhythmic patterns.

Let’s look at some general principles true of all Live’s delays. For starters, it’s worth keeping in mind how any digital delay works. A section of computer memory large enough to hold a chunk of audio as long as the chosen delay time at your DAW’s sampling rate is reserved for the delay buffer. Audio input to the delay is written sequentially to the buffer, and when the end of the buffer is reached, writing starts over at the beginning. Audio is simultaneously played back from the buffer, with the sample from the current buffer position being played back before it is overwritten with the latest audio-input sample. This ensures that playback is always one full delay cycle later than recording. Feedback, if any, simply mixes some of the output with the new input. For more complex delay effects like the ones 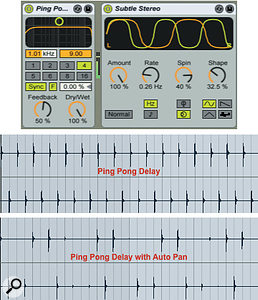 3: Clicking Ping Pong Delay’s ‘F’ (for Freeze) button, between the Sync and Offset controls, loops whatever is in Ping Pong Delay’s buffer, alternating the pattern between the left and right channels. Processing the output with Auto Pan and then manipulating its Rate and Phase or Spin controls produces constantly changing rhythm patterns. described here there may be several active buffers, but the principle remains the same.

Simple Delay, Ping Pong Delay and Filter Delay all use the same system for selecting the delay time. In sync mode (left of screen) the number tabs indicate the delay time in 16th notes. You use the numerical tab to the right of the Sync button to increase or decrease the selected time by as much as 33.3 percent. In time mode (right) the buttons are inoperative, and the delay time is set in milliseconds using the numerical tab to the right of the Time button. The time-mode range is 1 to 300 ms.

The modes are independent, so setting a sync-mode value and then changing to time mode does not show you the corresponding delay time in milliseconds. To figure that out, grab your calculator, divide the song tempo into 15,000 and then multiply the result by the number on the selected button. If there is an offset, add or subtract that percentage from the calculated value. For example, the delay time without the +33.3 percent offset for the setting shown here at a tempo of 150 bpm is (15,000 150) x 2 = 200ms. The offset adds 66.6ms to that for a total of 266.6ms.

You can use the offset feature to provide delay times corresponding to triplets. For example, for a quarter-note (button 4) offset of -33.3 percent and +33.3 percent respectively, decrease or increase the delay by one eighth-note triplet (one-third of a quarter-note). Bear in mind that the 3 and 6 buttons

are for three and six 16th-note delays, the equivalents of dotted eighth and dotted quarter notes, not for triplets. You can also use offsets to add a swing feel to straight patterns. For example, try the settings shown, with no feedback, to a quarter-note kick-drum pattern and then reduce the offset to lessen the swing feel (0.0 percent offset simply adds kicks at the off eighth notes).