1: A Grain Delay embedded in an Audio Effects Rack with its controls mapped to the rack's Macro knobs. I've colour coded the controls by function: orange for grain settings, green for pitch, blue for delay and yellow for output. Spray (top-left) is actually a delay setting, but its effect is to add jitter to the grain spacing, so I think of it as a grain setting. The numerical box next to Grain Delay's Sync/Time button has different functions and separate mapping assignments in Sync and Time modes, and I've dedicated a knob to each.

If you've experimented with Live's Grain Delay Audio Effects plug-in or used other granular synths and effects, you may be left with the impression that granular processing is chaotic, hard to control and mainly useful for creating sound effects. However, with a little care in choosing your settings, you can use Grain Delay to achieve subtle and very musical results that are beyond the reach of other types of effect — and that's what we'll be looking at in this month's article.

What's In A Grain?

Grain Delay performs a fairly simple process: it samples incoming audio in very small chunks, called grains, and emits each grain after a delay whose time you can set in milliseconds or sync to tempo. You control grain size, pitch-shift amount, pitch and time jitter (randomisation) and output settings.

The grain size is set in Hertz (Hz) using the Frequency control, which you can think of as grains per second — higher frequencies mean more and smaller grains. You can calculate the grain size in fractions of a beat at your song's tempo by dividing the tempo by 60 times the frequency. For example, at a tempo of 120 bpm, a frequency of 4Hz (four grains per second) captures a half-beat (an eighth-note) per grain. But you don't need to be overly concerned with grain size; its practical significance is that larger grains (lower frequencies) are more stable when you use feedback, pitch-shifting or jittering with the Spray and Random Pitch controls.

A good way to experiment with Grain Delay is to place it after an electric-piano virtual instrument. Start with the settings in screen 1 and play a short note. The only effect you'll hear is the note repeated an eighth-note later. Increase the Pitch knob setting to 2, and the repeated note will be shifted up a whole tone. Add 50 percent feedback and you'll hear eighth-notes cascading up the whole-tone scale.

For a modified version of these settings that produces a familiar and playable electric-piano effect, change the pitch shift to 5 (up a Perfect Fourth) or -7 (down a Perfect Fifth) and set the Feedback to 30 percent. Use a 16th-note delay (the button labelled '1') for arpeggios, or use Time mode with a delay of a few milliseconds for chords and slightly longer for rolled chords. Frequencies above 4Hz start to get blurry and produce artifacts.

You can make this effect even more playable by mapping the mod wheel to the Dry/Wet knob. Try it with sustained notes, intervals and chords, as well as with pitch-bend. 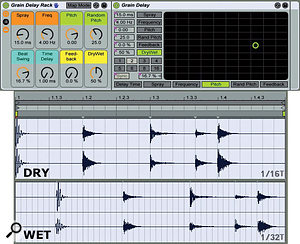 2: A simple eighth-note swing drum loop (middle) is processed with an eighth-note Grain Delay (top). The Spray and Random Pitch settings produce small timing and pitch variations that are heard as slight alterations in the drum sounds. The Beat Swing setting adds a 32nd-note triplet to the eighth-note delay, which emphasises the swing feel. The bottom graphic shows the hits added by the Grain Delay.You can create more interesting note patterns still by using two Grain Delays in series. Set the second Grain Delay's delay to twice that of the first, use feedback on only the second Grain Delay and experiment with different pitch-shifts. Make the first pitch-shift larger and set the second to +/– 1 or 2. The series can, of course, be extended with even more Grain Delays.

You can add a lot of mileage to even the simplest drum loop with a Grain Delay. The process repeats the drum hits in the loop with slight alterations to their sound, so you want a fairly sparse loop to start with. You'll want large grains (low Frequency settings) in order to capture whole drum hits for repeating.

Use the Spray and Random Pitch settings to introduce small variations in the drum sounds. The settings shown in screen 2 are a good starting point — you'll easily hear that the sounds become unnatural when you push those settings too far. Depending on the original loop, you'll generally want to use delays of an eighth or 16th note. Positive Beat Swing settings will add a swing feel. Depending on the original material, try settings of 8.33, 16.7 or 33.3 percent. 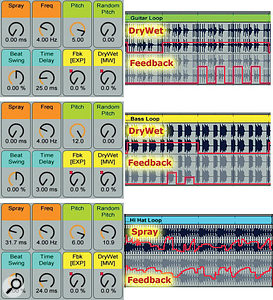 3: Here I've automated Grain Delay's Feedback, Spray and Dry/Wet controls to turn a four-bar rhythm-section pattern (guitar, bass and hi-hat) into a more interesting 16-bar pattern. Alternatives to automation include MIDI controllers such as mod wheel and expression pedal or manipulating Grain Delay's on-screen XY controller. (You cannot use the XY controller for parameters that are mapped to Macro knobs.)When you run up against the limits of your source material — construction kits with short loops and few variations, for example — Grain Delay can save the day. A little automation, either recorded or drawn in, can take a lot of the repetitiveness out of a groove built from short loops. In the example shown in screen 3, I've started with settings derived from those previously described and then automated two of the knobs.

The groove in question starts with four-bar guitar, bass and hi-hat loops. For the guitar, which is a monophonic line, I've used a five-semitone pitch-shift with a very short delay time. Turning up the Wet/Dry knob doubles the line a perfect fourth higher, and increasing the feedback doubles it again. The automation turns that into a 16-bar pattern. The 25ms delay adds some flam to simulate strumming.

The bass part is doubled an octave higher with minimal delay, and because of the large pitch-shift, increasing the feedback sounds a bit like scat singing over the bass line. With the hi-hat, I've used a short delay and moderate pitch-shift, along with delay-time (Spray) and pitch jitter to change the colour without making the part busier.

Grain Delay is a great tool for processing acoustic and electronic instruments. For example, you can turn the highest quality sampled grand piano into an unruly bar-room upright with just a few Grain Delay tweaks.

4: These three Effects Rack panels reflect the settings for a bar-room upright piano, a phaser/flanger-like effect for strings and pads and extreme processing for a lead synth. The orange and black regions of the phaser/flanger Time Delay knob reflect clip-envelope modulation emulating a triangle-wave LFO. MIDI mappings for mod wheel (MW) and sustain pedal (SUS) are also indicated.

Start with a 50 percent Dry/Wet mix and a low Frequency setting. Experiment with delay times in the one to five millisecond range for changing the piano's timbre. You're not limited to integer values: you can type in values to two decimal places, and a few tenths of a percent can make a huge difference. Alternatively, map Time to a Macro knob and set its range maximum to 5ms, then use the knob or automation to adjust it. Set Spray in the 1ms range to vary the timbre of each note.

Although you can use Grain Delay's Pitch parameter to detune the piano by typing in values of a few hundredths of a semitone, I prefer to use Random Pitch. Values between 10 and 30 sound most authentic, but you can push it up to 100 for a really out-of-tune beast.

For a phaser/flanger-like effect that works well with strings and pads, start with the piano settings, but change Random Pitch to 0.00. Increase Grain Delay's Frequency and Feedback to around 15Hz and 60 percent, respectively. You can use either a clip envelope or track automation to vary the Time Delay knob in a triangle-wave pattern and map the mod wheel to the Dry/Wet mix to fade the effect in and out.

For lead-synth patches, concentrate on Time Delay, Frequency, Feedback and Pitch. I find the full range of those parameters useful, and I generally avoid Spray and Random Pitch. In particular, try maximum feedback and the upper-middle part of the frequency range. A pitch shift of 1 or -1 with a delay of around 30ms adds a granular up or down sweep to each note, and mapping the Pitch knob to a footswitch or sustain pedal with a range of -1 to 1 lets you change sweep direction on the fly. Mapping the mod wheel to the Dry/Wet knob is essential here — these are synth patches.