Ableton Live: Repeat After Me

We show you how to use Live’s delays as a replacement for reverb and as an effect in their own right.

When reverb is gumming things up you have three ways of taming it: turn the reverb off, reduce its bandwidth or try delay instead. You’ll find a lot of creative ways to use delay along with or instead of reverb in Geoff Smith’s Recording Techniques column ‘Creating & Using Custom Delay Effects’ in SOS May 2012 issue. This month we’ll investigate ways to use Live’s various delay effects alone as well as with other effects to either replace or augment reverb. But first, here’s a quick look at the other two ways of taming reverb. 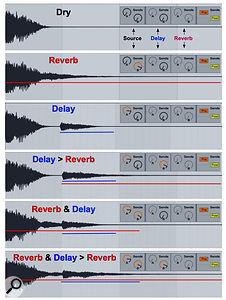 1: The six panels show the effect of applying reverb, a quarter-note delay or various combinations of the two to a short piano chord. The control-panel graphics show the send levels to the delay (A) and reverb (B).Turning the reverb off on a track or submix doesn’t need to be as ham-handed as it sounds. For example, when you have a drum track with a strong back beat, try applying the reverb to the back beat and turning it off for the rest of the kit pieces. (Applying reverb to individual kit pieces is most easily done when you place the reverb in one of the Drum Rack’s Return Chains.) More generally, look for individual tracks or parts where reverb really helps and then remove or reduce it on the other parts. The filter in the Input Processing section of Live’s Reverb device can also work wonders in keeping the reverb out of the way, and it does not affect the dry portion of Reverb’s output. Click the Lo Cut and/or Hi Cut buttons and then use the handle in the graphic display or the numerical readouts to adjust the filter’s frequency and resonance.

One reason to choose a delay instead of reverb, as illustrated in the second and third panels of screen 1, is to separate the effect from the source. If you’re processing sustained chords, for example, a low-level quarter-note delay provides a quiet echo without stepping on the tail of the chord. (You could use a reverb’s pre-delay for a similar effect, but the pre-delay range is usually limited and calibrated in milliseconds rather than in fractions of a beat, and the reverb will add some colour.) When your goal is to design a custom effect rather than to leave space, consider using a delay and a reverb on separate Return tracks. For example, in the fourth panel of screen 1 the delay feeds the reverb, in the fifth panel they work in parallel and in the sixth panel both the source and the delay are sent to the reverb.

To set things up using Live’s Simple Delay turn its Link and Sync buttons on and turn Feedback all the way down. That will give you a single echo at the chosen delay time (measured in 16th notes) with the Dry/Wet knob controlling the relative levels of the source and echo. To add a little space to the effect, turn Link off, make sure the delay times match and adjust their Offset controls to small percentages in opposite directions as shown at the top of screen 2. 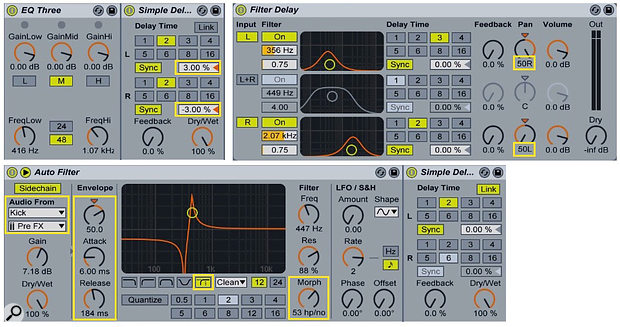 Although inserting a delay on the source track is the quickest way to set things up, placing it on a Return track gives you more options. You can use the Return track’s Pre mode to control the level of the echo independent of the track’s level and any volume automation. And you can add other effects to the Return track without affecting the dry signal. For example, placing an EQ Three before or after Simple Delay lets you control the bandwidth of the echo: turn EQ Three’s L and H buttons off and adjust the width of the remaining (M) band using the FreqLow and FreqHi knobs along with the 24/48 filter-slope buttons. Use EQ Eight instead of EQ Three when you want to sculpt your own filter. Auto Filter is yet another EQ alternative — it provides a built-in LFO and envelope follower to modulate the filter’s frequency. When you use the envelope follower’s side-chain input, its Dry/Wet knob sets the mix of the source and side-chain inputs that the envelope follows. The Quantise buttons along the bottom quantise the envelope and LFO modulation. Auto Filter offers low-pass, high-pass, band-pass and notch filters along with a Morph mode that lets you combine those with the twist of a knob as shown in screen 2 (above).

Filter Delay is yet another option. It does the whole job by providing separately filtered delay lines for the left, centre (L+R) and right channels. The Input buttons turn the channels on and off, whereas each channel’s On button toggles its filter. You control the feedback, panning and volume of each delay with the knobs on the right. In the example in screen 2, only the left- and right-channel delays are active and their outputs are panned to the opposite channel. Try this Filter Delay setup with mid-side processing by inserting it after the mid-side conversion but before the conversion back to stereo. In that location, Filter Delay’s left input delays and filters the mid signal while its right input delays and filters the sides signal. If you flip their output panning, the processed sides will wind up in the middle and the processed middle will wind up on the sides. Check out the November 2015 Live article ‘Too Good To M-S’ for instructions on how to set up mid-sides processing using Live’s Utility effect. 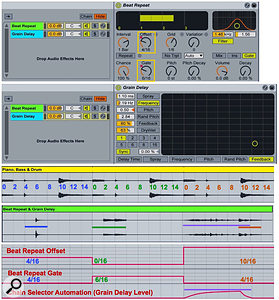 3: Beat Repeat and Grain Delay occupy separate chains of an Audio Effects Rack on a Return Track. Beat Repeat automation causes a different section to be captured and repeated in each of the three passes. Grain Delay is faded in for the last pass.Live’s delay-based effects Beat Repeat and Grain Delay take things a little further out, but can also substitute for or augment reverb when used sparingly. Beat Repeat grabs a chunk of audio at regular intervals set by its Interval, Offset and Grid knobs: Offset sets where in the interval the chunk is grabbed and Grid sets the length of the grab, and thereby the length of each repeat. The grab is repeated until the Gate time (set by the Gate knob) runs out, and that includes the time for the grab. The remaining controls affect modifications to the output such as pitch shift, volume decay, filtering and randomisation of the grab and grid. The Mix, Ins and Gate buttons determine how the input is passed to the output — use the Gate button when Beat Repeat is placed on a Return track.

With Grain Delay the emphasis is on granular processing as controlled by its top four settings: Spray, Frequency, Pitch and Rand Pitch. The controls below those amount to a mono version of Simple Delay. So think of it as Simple Delay with granular processing of the delayed sound. A good way to get to grips with it as a delay effect is to modify its various factory presets’ delay settings and then play with its X-Y control.

In screen 3, I’ve placed Beat Repeat and Grain Delay on separate chains of an Audio Effects Rack and set up the Rack’s Chain Selector to crossfade between them. The source (the yellow audio clip) is a one-bar loop with a piano chord on the first beat, a snare-rim hit on the second beat and a bass note an eighth-note after the third beat. The Beat Repeat Gate and Offset controls as well as the Rack’s Chain Selector are then automated to produce the effects output shown in the green audio clip. The Beat Repeat Offset automation ensures that the snare is grabbed in the first pass (at 4/16ths), the piano is grabbed in the second (at 0/16ths) and the bass is grabbed in the third (at 10/16ths). The Gate automation ensures that snare and bass are repeated once (2/16ths capture time plus 2/16ths play time) whereas the piano is repeated twice (2/16ths capture time plus 4/16ths play time). The Chain Selector automation brings the Grain Delay into play for the first three beats of the last pass.