While there was little that was new from Apple for musicians and audio engineers at the recent Macworld and NAMM shows, announcements from other manufacturers will allow Macbook Pro owners to take advantage of more sophisticated audio and DSP hardware while on the road.

Apple Computer Inc is no more. In his annual keynote for the January 2007 Macworld show in San Francisco, CEO Steve Jobs announced that the company would be dropping the word 'Computer' from their official name and would now be known simply as Apple Inc. The reason behind this is obviously to reflect Apple's move into consumer electronics: although these devices are still technically computers, they're not the personal computing products for which Apple were previously best known. Since most people always referred to Apple Computer as Apple anyway, this is one Apple transition most users probably won't even notice or care about. 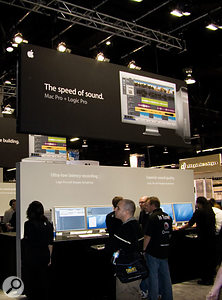 Although Apple's name change was announced at the end of the keynote, the focus of the event was very much on consumer electronics, with no announcements relating to Mac hardware or software. This was a little disappointing, given that the occasion was Macworld, and it would have been interesting if more information had been made public regarding the status of the next major version of Mac OS X, or the now-annually-expected (but this year absent) upgrade to Apple's iLife suite of digital lifestyle applications that could have included Garageband 4.

Despite a brief introduction of Apple TV (the device formally known as iTV, that allows Windows or Mac users to view content from iTunes on a TV) at the start of the keynote, this year's Macworld keynote was all about iPhone, a product Jobs said he'd been waiting two and a half years to introduce. In addition to allowing you to make phone calls, the device, which features a completely touchscreen-driven interface, also offers wide-screen iPod functionality and a host of Internet-access tools.

While there's a temptation to justify writing about iPhone in Apple Notes because it's from Apple and by saying 'but wait, maybe it has a musical purpose!' Let's be honest, it's a phone. When was the last time you whipped out your Windows or Palm (or Symbian or Linux) powered phone to run a tap-tempo program? And how annoying would it be to be tapping tempo in a session only to have your train of thought interrupted by your mum calling? Not to mention the fact that most professional studios ask you to switch off mobile phones anyway!

Part of the interest in using the iPhone for other applications comes from the news that it runs some form of Mac OS X, although this in itself raises many issues, as the phone itself is said to use an ARM processor (UK readers may remember ARM as the successful processor architecture company spun out of the now-defunct Acorn Computers), and OS X as we know it today (with its open-source Darwin foundation) doesn't support ARM chips. But even if the iPhone did run a full copy of Mac OS X, this might be a moot point, as Jobs has said in many interviews that iPhone will be a closed platform and will not (at least officially to begin with) run third-party applications.

Although Macworld proved to be less interesting than usual for musicians and audio engineers (unless you want a new phone or need to access iTunes content on a TV), Apple usually have a fairly good presence at the NAMM show. This year was no exception, but with the same booth on show again and the usual Logic 7 demos, there was nothing new announced here either. However, it wasn't just Apple that didn't have significant new product announcements for NAMM. With many companies now shifting away from trade-show new releases, the majority were showing the current versions of their respective wares.

In addition to Apple TV and iPhone, another new product from Apple was announced at Macworld, even though it wasn't featured in the keynote: a new Airport Extreme wireless base station, featuring a new form factor (along the lines of Apple TV and Mac Mini) and support for 802.11n, capable of providing data rates of up to 540Mbit per second at up to 50m away. You might remember that the original Airport was based on the 802.11b standard and supported 11Mbit/s, while the more recent Airport Extreme technology used 802.11g, offering 54Mbit/s — both of the latter at distances of up to around 30m. As a standard, 802.11n hasn't been completely standardised yet (although it's getting close), so this new base station is actually based on the draft specification for 802.11n. Interestingly, Apple state that all Intel Core 2 Duo-based and Xeon-based Macs, except the 1.83GHz Core 2 iMac, already support 802.11n, and this functionality can be enabled with software that's supplied with the new base station.

The base station itself includes plenty of security features, including a firewall with NAT (Network Address Translation). In terms of connectivity, there's one 10/100 Ethernet WAN port, three 10/100 Ethernet LAN ports and a USB port for sharing printers and hard drives. Like Apple's previous Airport Extreme base station — but unlike Airport Express — this new product lacks an audio output to support AirTunes, so you can't wirelessly stream audio from iTunes to a pair of speakers connected to the base station.

The new Airport Extreme will be shipping in February (hopefully by the time you read this) and costs £119.

Do You Take Express Cards?

Perhaps the most interesting news at NAMM this year for Mac users — and Macbook Pro users in particular — was the appearance of audio and DSP hardware supporting Express Card expansion slots. Express Card is the PCI-Express-based successor to the old PCMCIA Cardbus slot technology that used to be included on Powerbooks. Although there are two form factors of Express Card (a 54mm-wide L-shaped version and a 34mm card), Apple support only the more popular Express Card/34 slot in Macbook Pros.

While there are many Express Cards on the market already, the only ones that have been directly useful to Macbook Pro users for audio and music purposes so far are those offering additional Firewire ports (such as an 800 port for first-generation 15-inch Macbook Pro users, like myself) or eSATA ports. As the name suggests, eSATA (External SATA) allows you to connect external hard drives to your computer via the SATA interface that previously was only used to connect drives internally on desktop computers. However, at this year's NAMM show Apogee announced the Symphony Mobile system and Universal Audio introduced the UAD Xpander, both utilising Express Card/34 technology.

Apogee's Symphony Mobile card is part of the Symphony system Apogee (www.apogeedigital.com) introduced last year, allowing the company's range of audio interfaces to be connected to a Core Audio-based computer recording system, providing low latency (Apogee claim 1.6ms at 96kHz) and onboard I/O routing. Originally the converters connected to the computer via a PCI Express or PCI-X card, but now Apogee have introduced the Symphony Mobile Express Card/34, so you can connect up to four interfaces to a laptop system for up to 32 channels of input and output.

One of the highlights of Apogee's Symphony is VBus, which allows you to route audio between multiple Core Audio applications at a hardware level. In a desktop system you can use multiple Symphony cards at the same time, with each card supporting 32 VBus channels, but since a Macbook Pro only has one Express Card slot, the mobile system supports a maximum of 32 VBus channels. One use of VBus is to provide internal busses that can be recorded back into Logic via the input of another audio channel, which is really handy for creating more complex mixes. Symphony Mobile should be available in March. 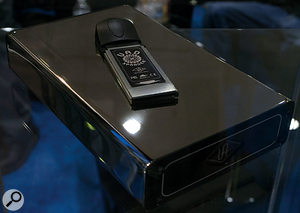 Universal Audio's UAD Xpander is an Express Card-compatible version of the company's UAD1 card, allowing you to run UAD plug-ins on the road with your Macbook Pro.

UAD Xpander, from Universal Audio (www.uaudio.com), is an external version of the popular UAD1 PCI-X or PCI Express card that runs the company's highly regarded DSP plug-ins, which integrate into native recording environments. UAD Xpander is available in three different models, the lower two presented in a black enclosure with $500 and $1000 plug-in vouchers and the high-end model in a cool silver enclosure with all available plug-ins. At the show, Universal Audio were demonstrating UAD Xpander on a Macbook Pro with Cubase 4 and it seemed to be running pretty well. It was mentioned that a desktop 'host' card will also be made available at some point, so that you could plug your UAD Xpander into either a desktop or mobile system. This is useful, since plug-ins are authorised to specific UAD hardware, meaning that you wouldn't need to buy a second complete UAD system either for on the road or in the studio.

It's likely that we'll see more companies following in the footsteps of Apogee and Universal Audio this year, providing Express Card audio and DSP solutions for mobile musicians. In the meantime, though, there is another possibility when it comes to running your internal cards with a laptop on the road. Magma (www.magma.com) are well known for making expansion chassis products that allow you to use PCI cards with both desktop and mobile systems, and the company now offer Express Box and Express Box Pro, which both enable you to easily connect a PCI Express card to a laptop via the Express Card slot. Express Box supports 6-inch cards, while Express Box Pro supports the 12-inch variety.

While I didn't get a chance to take a UAD Xpander apart, I would guess (especially judging from the size of the case) that technically it's likely to be little more than a one-slot PCI-Express-to-Express-Card chassis anyway, so there's no reason why the Express Box or Pro models shouldn't work well. Still, as always, it's worth checking on compatibility before making a purchase.