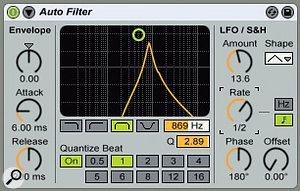 1: In this setup, a triangle-wave LFO modulates the band-pass filter frequency with a half-note cycle. The 180 degrees Phase knob setting makes the filter bands move in opposite directions in the left and right channels. The Quantise Beat setting makes the bands jump at 16th-note intervals rather than moving smoothly.

There's more to Live's Auto Filter audio effect than simply applying an analogue-style filter to your virtual instruments and audio clips. It offers extensive modulation (hence the 'Auto' in the name), and you can create arrays of several Auto Filters in series, parallel or a combination of the two to give you moving-filter processes you won't find in any synth or sampler. In this month's column I'll be showing you just what you can get out of Auto Filter if you know how. Let's start with the basics...

Loop an ambient sound or pad clip without much motion on an audio track, and insert an Auto Filter on that track. The default setting — a low-pass filter with 12.5kHz cutoff — doesn't have much effect, so use the buttons below the filter graph to select a band-pass filter (third button from the left). Click and drag the circle in the graph horizontally to hear the effect of the filter at different frequencies, and drag vertically to hear the effect of different bandwidths. Each of the remaining Auto Filter controls automates horizontal dragging in one way or another.

On the right of the control panel you'll find a stereo LFO offering five waveforms (sine, square, triangle and up and down ramps) and two sample-and-hold modes (stereo and mono). Increase the filter Q to maximum by dragging the circle to the top, choose the triangle shape and boost the Amount and Rate knobs to about halfway. Although it's not shown graphically, you'll hear the LFO's effect on the filter's frequency. What might sound like a panning effect is actually the phase difference between the left and right channel LFO waveforms, which the Phase knob shows to be 180 degrees: one side's peak is the other side's trough. Change the phase to zero and the stereo aspect of the effect goes away.

The two square buttons to the right of the Phase knob choose between Phase and Spin modes. Click the bottom button and increase the Spin knob to about halfway to hear a somewhat different stereo effect. Here, the left and right LFOs are running at different speeds, so the bands aren't reaching their respective high and low points in synchronisation.

The buttons next to the Rate knob choose between free-running (Hz) and tempo-sync'ed (note icon) LFO modes, as showing in screen 1. In tempo-sync'ed mode, the Phase/Spin buttons are replaced by an Offset knob that offsets the waveform start point: for example, a setting of 180 degrees starts the triangle wave at its peak. The thing to notice is that, unlike Phase and Spin, Phase and Offset can work together.

The Quantise Beat buttons below the filter graph apply to all LFO modes as well as to the envelope generator. When quantise is turned on, any frequency modulation moves in tempo-sync'ed jumps determined by the number buttons. The numbers indicate 16th notes, so the range is a 32nd note (0.5) to a whole note (16). 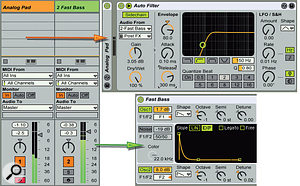 2: The synth on the Analog Pad track is processed by a high-pass Auto Filter (top right). The Auto Filter's envelope is driven by a side-chain input from a synth bass with the quick volume envelope (bottom right). The long release time ensures that the bass comes in before the synth. When playing a fast bass line you'll hear the synth on only the last note.

Now let's look at Auto Filter's envelope and side-chain abilities. Set the LFO amount to zero and play with the top knob in the Envelope section on the left. If you've chosen a clip without much volume contour, you'll notice that the effect of the knob is about the same as moving the frequency up and down. That's because the Envelope is actually an envelope follower, so a clip with a constant level will simply produce a frequency offset proportional to the Envelope knob's position. Notice also that the knob is bipolar: using the left side of the range causes the filter frequency to decrease as the level increases.

Click the triangle above the Envelope knob to reveal the side-chain section. This lets you use the Audio From drop-down menus to select the output of any other Live track to feed the envelope follower. You use the Dry/Wet knob to mix Auto Filter's input with the side-chain input as the envelope follower's source. Side-chain filter modulation is a bit different from side-chain compression in that instead of using the level of one signal to control the dynamics of another, you can use it instead to filter out conflicting frequencies. You can also exploit the common practice of driving the side-chain with a kick-drum or snare-drum track to make the filter frequency pulse with the beat. An interesting real-time technique is to create a filter envelope for one synth patch that follows the volume envelope from another. Put an Auto Filter on the track of the synth you want to filter and devote another track to the synth driving the side-chain (see screen 2). You must route MIDI to both synths, but if need be, you can mute the side-chain track as long as you don't feed the side-chain post Mixer.

3: This simulation of a tremolo effect uses low-pass and high-pass Auto Filters in series. Collecting them in an Audio Effects Rack lets you use a single knob to adjust the LFO and envelope settings for both Auto Filters. Because the envelope amounts are mapped with opposite polarity and the high-pass LFO is offset by 180 degrees, modulation by either one narrows and widens the band. The LFO Amt Macro knob is also assigned to the MIDI mod wheel.

Of course you're not limited to one instance of Auto Filter. You can arrange them in series in a track's Device Chain, and you can arrange them in parallel using an Audio Effects Rack. (For a detailed look at Racks, see Live Technique in the December 2011 issue of SOS.) You generally arrange filters in series if their range of passed frequencies overlap, and you arrange them in parallel otherwise. For example, a low-pass filter with cutoff frequency 800Hz in series with a high-pass filter with cutoff frequency 500Hz will give you a filter that passes frequencies between 500 and 800 Hz: a band-pass filter. Conversely, if the low-pass cutoff is 500Hz and the high-pass cutoff is 800Hz, arranging them in series will give you silence, whereas arranging them in parallel will suppress the frequencies between 500 and 800 Hz: a notch filter. But given that Auto Filter already has band and notch filter modes, why would you do that? Think modulation.

You can create an unusual and versatile tremolo-like effect with low-pass and high-pass Auto Filters in series (the order isn't important). Try this on a track with an electric piano instrument or audio loop and collect the two Auto Filters in an Audio Effects Rack to co-ordinate their settings. Use separate Macro knobs for each filter's cutoff and Q. This lets you fine-tune the bandwidth and dial in the quality of the wah-wah introduced by high Q settings (see screen 3). For an easy variation, reveal the Rack's Chain List and drag one of the Auto Filters to a new chain. Now you have parallel low-pass and high-pass filters, so you'll want to set the low-pass cutoff lower than the high-pass cutoff to create a pulsing notch.

4: This moving multi-band filter Audio Effects Rack holds band-pass Auto Filters on individual chains for a parallel configuration. All their frequencies are mapped to the same Macro knob, but their ranges are adjusted to spread the bands apart (see above the Rack). Moving multi-band filters are easy to create with Racks of Auto Filters. Start with a single chain containing an Auto Filter in band-pass mode and map the Rack's Macro knobs as shown in screen 4. Now Alt-drag or Opt-drag the chain down the chain list to create as many copies as you want — four is a good starting point. Each time you create a new chain the Macro knob mappings will be preserved, but you'll want to adjust the Filter Freq Macro knob ranges to spread the bands apart. This is an instance in which all the LFO shapes work well, so I've given LFO Shape its own Macro knob. Try slow, sync'ed LFO rates with 180 degree Phase and the ramp-up shape.

To convert the multi-band filter Rack into a comb-filter Rack, simply select the second, third and fourth chains individually and move their Auto Filters to the end of the first chain (drag each over the first chain in the Chain Selector until the chain is revealed and then drag it to the end of the chain). Be sure to delete the empty chains. With a comb filter, a sine wave is the preferred LFO shape, and Spin adds a nice space to the sound, so remap the last Macro knob to Spin.

The multi-band filter Rack is an excellent starting point for creating more exotic effects. Start by inserting one of your favourite effects after the Auto Filter in just one of the bands. Live effects Beat Repeat, Frequency Shifter, Grain Delay, Resonator and Simple Delay are good candidates. Keep in mind that Live has EQ and compression covered with EQ Eight and Multiband Dynamics, so there's no need to reinvent the wheel — the idea here is to experiment.