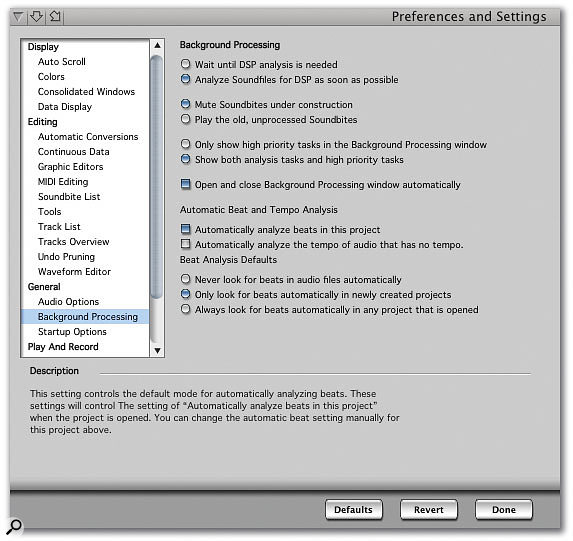 It's not terribly exciting, but the Background Processing Preferences in DP 4.5 are important for configuring Beat Detection.

The new Beat Detection Engine in DP 4.5 gives you much greater control over audio quantising and tempo manipulation. We explain how...

It's notable that the new Beat Detection Engine is being given just about top billing in all the DP 4.5 advertising, but while most DP users are familiar with the concepts of timestretching and Recycle-like loop slicing, this new feature appears to be something else again. So what exactly does it do, and how can it help you?

Well, primarily the Beat Detection Engine searches out the transients or 'attacks' in rhythmic audio files and does nothing more than make a note of where and how strong they are. Your audio plays back in the same way whether the Engine is turned on or off, and changing the tempo of your sequence does not automatically result in the sort of tempo manipulation that characterises Ableton's Live. Beat Detection, instead, is just the precursor to a clutch of interesting possibilities, including:

What's more, Beat Detection also allows DP to have a good guess at the tempo of the audio in your soundbites, making it easier than it used to be to work with rhythmic audio of varying tempos — even audio that wasn't recorded to a click. Tempo analysis is a rather different beast to beat detection, though, and I'll be looking at this in more detail next month.

As is typical of many a new DP feature, Beat Detection is far-reaching enough to impinge on lots of other existing features, and to manifest itself in a number of windows and menus. One thing's for sure — MOTU never do things by halves!

Before starting to work with the Beat Detection Engine, it's worth visiting the new consolidated Preferences window, accessible from the Digital Performer menu, and clicking on the Background Processing list item. It's here that several important Beat Detection settings are made. Starting at the bottom, the three 'Beat Analysis Defaults' options determine when DP automatically looks for beats in soundbites. They're pretty self-explanatory, and can be summed up as: never; only for new projects; and for all projects, including old ones. The two checkboxes above are a little less clear, especially as the 'hint' text for one of them doesn't seem quite right. Basically, the top checkbox just turns on beat detection for the current project, while the bottom one enables automatic tempo analysis of soundbites. Audio must have had its beats detected for any tempo analysis to take place, though.

The settings in the upper part of the window are perhaps more familiar, but may be just as important. The topmost pair of radio buttons controls when DP analyses audio for timestretching and pitch-shifting (as it has long been able to do). The new default is to analyse as soon as possible, since DP 's PureDSP algorithm is used in conjunction with the Beat Detection Engine. Following an 'old' preference that controls how DP deals with soundbites that are being processed, there are some options for DP 's background processing window. These have changed in DP 4.5 because background tasks are now deemed either 'high priority' or 'analysis'. If you set the Background Processing Window to show only high-priority tasks, things like beat detection and tempo analysis won't show up, although they're still taking place.

In the aux send section of DP 4.5's Mixing Board, clicking the new, tiny 'P' button next to the send level knob makes a send pre-fader. Pre/post can also be configured in a send's pop-up menu.

As this month's Performer Notes neared completion I got some news from MOTU about the impending release of DP 4.51. This adds some intriguing new features, such as dynamic CPU management and better compatibility with UAD1 and TC's Powercore cards. Check out www.motu.com for the download.

The default settings for background processing are a good starting point for using the Beat Detection Engine, but there are plenty of users for whom they'll represent wasted processor cycles — live recording purists, classical music editors, mastering engineers and spoken-word recordists, amongst others, whose audio isn't really compatible with the Beat Detection algorithm.

If you definitely don't want to make use of it, you can disable it completely by deselecting 'Automatically analyse beats in this project' and choosing 'Never look for beats in audio files', again in the Background Processing Preferences pane. And if some of your project's audio has already been subject to beat analysis, you can discard this completely by trashing the Analysis folder in your project's folder. Any beat display remnants in soundbites can be eradicated by deselecting 'Show beat grid lines' in the Graphic Editor's Preference pane.

Assuming you're using DP 's background processing defaults and you want to make use of the Beat Detection Engine, here are a couple of practical scenarios:

1. The sober (but not so tight) drummer: Most musicians find it hard to really 'groove' with a click track, drunk or not, but for styles which juxtapose live recording with 'programmed' parts, the click is a necessary evil. Using the Beat Detection Engine's ability to quantise live audio, any deviations from the beat can be quickly quantised right back on to it.

After you've recorded your drum track, DP tries to detect beats within it. Any that it finds are marked with vertical blue-grey lines superimposed on soundbites shown in the Sequence Editor. DP tries to find as many beats as it can, but the number that are active at any one time can be adjusted by first selecting the soundbite(s), and then choosing the Adjust Beat Sensitivity window via the Audio menu, or with the keyboard shortcut control-D. Dragging the slider to the left in this little window disables more and more beats, whilst dragging it all the way to the right enables all of them. You're looking to get DP to find beats on the really important transients, particularly ones that fall on the 'strong' beats of the bar. If you can achieve that, you hit Apply and then you're ready to quantise.

First, select the section of audio that needs quantising, perhaps using the I-Beam tool or double-clicking a soundbite and dragging over a section within it — so called 'pop-editing'. You could, alternatively, select a whole soundbite, or several. Then choose 'Quantize...' from the Region menu, or using Apple-0 (zero). Under the 'What to quantize' pop-up choose 'Beats within Soundbites', and below this choose a suitable note value. This setting works differently than it does with MIDI, in that DP doesn't try to quantise every beat in the audio, just the ones nearest to the time-value divisions you choose. Beats occurring between time-value divisions are 'spaced out', to maintain a natural feel and to minimise the impact of the DSP time-stretching that will occur with quantising. So you can often choose pretty large time values here (crotchets/quarter-notes), or at least larger values than the very smallest sub-divisions of the musical beat within the soundbite, which should look after themselves to a large extent. Finally, click Apply in the Quantize window to fix your audio.

But what if DP refuses to find useful beats in very complex audio, or is plagued by lots of 'false positives'? The thing to remember is that you can override its beat decisions, creating new ones and disabling incorrect ones, which should make almost any audio 'quantisable'. This is done in the waveform editor. First, select the troublesome soundbite, then choose 'Edit in Waveform Editor' from the Audio menu. In the Waveform Editor click on the Beats tab, and you should now see all the beats DP detected in the audio (see screen above). Enabled beats are dark blue and have an intensity slider, while disabled ones appear grey. You can again use control-D to access the Adjust Beat Sensitivity window, but here you have full manual control too. If you point to a beat you get a 'pull hand' mouse cursor: clicking selects a beat (and also plays it), while clicking and dragging moves it. With a beat selected you can choose 'Delete Beat' from the window's Beats menu to get rid of it completely, or 'Toggle Active Beat' to disable it. The left/right arrow keys on your keyboard can be used to move between beats, and I set up the keyboard shortcut '/' (slash) to Toggle Active Beat (using the Commands window). This way it's very easy to step through a large number of beats, turning various ones on and off. If you need to create a beat where there just isn't one, click within the waveform to place an insertion point, then choose 'Create Beat From Insertion Point' (in the Beats menu). After coming up with the perfect selection of beats in this way, you're ready to quantise, as before. 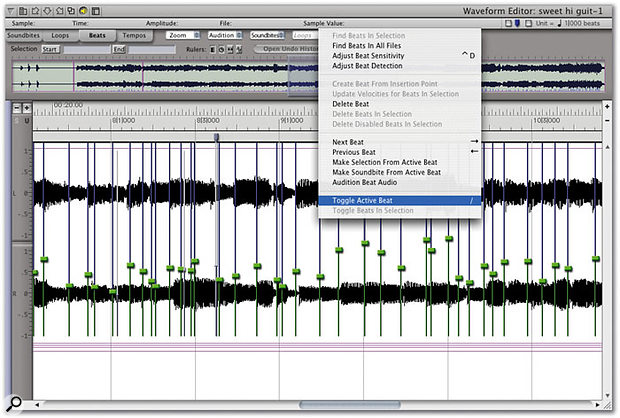 A beat-detected soundbite, viewed in the Waveform Editor. Here, individual beats can be enabled or disabled, via the Beats menu, which is open in the screen above.

2. Editing beat-detected audio: If you're at all familiar with DP you'll already know about the Sequence Editor's Edit Grid. This can be turned on or off by checking the mysterious, unnamed box at the top right of the window. The grid's time division can be set with the pop-up menu next to that box. When the grid is on, a dragged soundbite will snap to positions relative to the edit grid. The same goes for selections you make within and across soundbites with the I-Beam tool, and by dragging in the lower section of soundbites with the arrow tool.

In DP 4.5, lurking next to the Edit Grid checkbox is a new Beat Grid checkbox, and this can be used instead of, or in addition to, the Edit Grid. With this turned on by itself, drags, selections and the scissors tool snap to beats. What can this do for you? Well, it makes splitting soundbites, perhaps to cut out a single snare beat, simplicity itself — you just use the scissors tool, click near to the beat markers surrounding a beat, and you should have a perfectly cut soundbite. A section of audio, isolated in this way, can then be dragged over other soundbites, at which point it will snap to their beats. This makes it ludicrously easy to replace individual beats and even notes — in a bass guitar part, for example.

With the Edit Grid checkbox enabled as well, you have even more options. If your audio was recorded with a click and is mostly in time, you could try isolating the most useful longer sections and then duplicating them to build an entire track. In this case it may be better to split soundbites at bar rather than beat boundaries, so that timing relative to the original click is maintained, with possibly less need for audio quantising of duplicated sections.

We'll be covering lots more about beat detection next month, including working with audio and grooves, tempo detection, and applying drastic tempo changes to recorded audio.