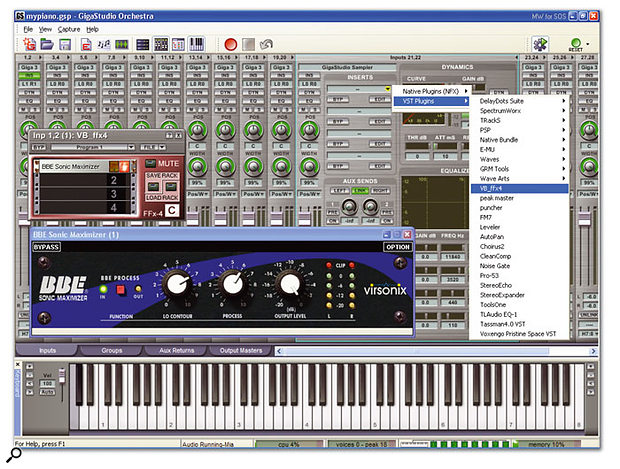 This month PC Notes comes across CD-burning problems, offers some Gigastudio 3 tips, and warns against a possible pitfall when updating a Cubase SX3 dongle.

This month, my CD-R/W drive started to give me problems. It will still read CD-ROMs and CD-Rs, but when I recently tried to burn a CD-R with it, using Ahead's Nero, it refused to read the files I'd just burned, complaining that I'd inserted a blank disc, and my new DVD drive couldn't read its contents either. I experienced no problems during the burn, got the usual 'CD successfully burned' message, and could even see the 'burned' area on the disk.

I burned a couple more discs, with exactly the same problem, and also tried using a CD laser lens cleaner, but eventually had to come to the conclusion that the drive had simply worn out. Laser diodes in CD and DVD players and recorders do age, slowly reducing in power output over time, which is why most of us have experienced hi-fi CD players that eventually refuse to read some CDs, even after careful cleaning.

So I turned to my new DVD burner, bought as the cheaper 'OEM' (Original Equipment Manufacturer) model without any software, cables, or other extras, and tried to burn a CD-R with that instead. Unfortunately, while Nero recognised it as a source device for reading both DVD and CD discs, it didn't appear as a destination device for burning purposes. This can often happen with cut-down, bundled burning software that is only designed to run with the drive it accompanies, but my Nero is the full version. In this situation, I knew the problem was most likely to be that the burning software was released before the CD burner: burning software generally incorporates its own database of CD burners and their capabilities, and if yours isn't recognised it won't appear as a recording device. Sure enough, having uninstalled my previous version of Nero and downloaded and installed the latest free update (from www.ahead.de), I was immediately able to burn a CD-R with my new DVD burner.

In last month's SOS, I reviewed Gigastudio 3 and had a few reservations about its operation. However, I'm pleased to report that Tascam have since released a third 'maintenance release' update (version 3.03) that addresses some of them. Firstly, compatibility with Intel's Hyperthreading has been improved, so some users should now finally be able to enable HT in their BIOS (thereby achieving lower CPU overhead when running audio interfaces at low latency), though Tascam say that some systems may still be unstable when HT is enabled. Sadly, my PC is one of them, and it still crashed badly with driver problems each time I enabled HT. I'm also continuing to have problems with Gigastudio 3 periodically refusing to enable my USB keyboard's MIDI In port because it declares it already 'in use' (even though it isn't). Tascam do, however, encourage anyone with problems to send their specs to them so they can make further improvements.

Version 3.03 also features a handful of bug fixes, including ones for missed program/patch changes and hanging notes that can occur if you're playing during a program change, as well as possible crashing if hardware settings are changed while the Gigapulse window is open. In addition, NFX and VST bypass states are now remembered correctly after a save, and MIDI Mixer Mute/Solo behaviour has also been Improved, as has the File Save command.

Michael Tippach's famous ASIO4ALL driver (or, more correctly, ASIO-to-WDM Wrapper) is now up to version 2.0, and now has an improved audio engine, looks better and comes with a PDF manual. And it's still freeware!

However, the most revolutionary addition is its Advanced Configuration page, which supports multiple interface devices. Yes, you read that correctly — for the first time it's theoretically possible to run multiple interfaces from different manufacturers inside applications such as Cubase SX. You will, of course, need to run them all from the same master clock to keep them in sync, and there are no guarantees, but the PDF manual is very helpful in explaining the various possibilities.

Gigastudio 3 has always automatically blocked plug-ins that it deems incompatible, while its comprehensive 'Configure Plug-ins' window lets you manually block others that you don't wish to appear in its list. Because Gigastudio 3 is a 'real-time' application, Tascam can't build in the plug-in latency compensation that most MIDI + Audio sequencers use on playback, so you might prefer to block plug-ins that exhibit high latency (such as some compressors, pitch shifters and convolution reverbs), since these may be almost unplayable otherwise. (If you use Cubase SX you can find out what each plug-in's latency is, in samples, from the 'Plug-In Information' window.)

Waves plug-ins are in DX (DirectX) format and require Waves' Waveshell in order to appear in their VST guise. You might be tempted to try to manually block the high-latency Waves plug-ins, such as Ultrapitch, Soundshifter and the Restoration and Masters bundles in Gigastudio 3, but I would advise that you don't. If you do, it's the Waveshell file that's blocked, and all your Waves plug-ins will have disappeared simultaneously next time you launch Gigastudio 3. You can, however, tidy up the plug-in list by creating a new folder named 'Waves' inside the VST Plug-ins folder, and dragging the existing 'Waveshell-VST 5.0.dll' file into it. This will place all the Waves plug-ins into their own folder within Gigastudio, to prevent you being presented with a long list of plug-ins you may not use.

Many Gigastudio 3 users have been frustrated at the program's lack of DX plug-in support. It's certainly annoying to find only half of your favourite plug-ins appearing in the list of options. Over the last few years there have been quite a few host applications, such as Cakewalk's Sonar, that support DirectX plug-ins but not VST ones, and various developers have stepped into the breech with VST-to-DX 'wrapper' plug-ins that let such hosts load the plug-in variety they don't otherwise support. Products that do this include Spinaudio's VST-DX Wrapper, the Tonewise DirectiXer, and the one that started it all — FXpansion's VST-DX Adapter, which is now bundled with Sonar.

DX-to-VST wrappers aren't so easy to find, although I did eventually track one down to try. Vincent Burel's FFX16 is designed as a DirectX 'rack' that lets you chain up to 16 DX plug-ins, each with on/off and bypass buttons, change their order via drag and drop, and load and save your chains. This was a godsend when early DX applications didn't allow plug-in chaining, and FFX16 is still a handy tool today for building complex DX effect chains. For our purposes, the cut-down FFX4 version, with four plug-in 'slots', is perfect as a DX-to-VST adapter, especially as you can download it free from http://vincent.burel.free.fr/download/ffx4_FullDemo2.zip. During the install you just need to choose the VST version. Next time you open a VST-compatible host there will be a new VB_ffx4 plug-in, into which you can load any DX plug-in (see opening screenshot, above).

I didn't experience any problems with using FFX4 in Wavelab Montages (another VST-only plug-in zone), but Gigastudio 3 is rather more picky, resulting in some flickering FFX4 graphics and a refusal to let me remove any plug-in once it had been loaded into the rack. However, you can still 'Select Another Plug-In' and load it over the top of the existing one, so this isn't much of a problem in practice. I also experienced some audio glitching after loading a few DX plug-ins, and these could only be cured by increasing Gigastudio 's GSIF driver latency. These limitations aside, if you've got a killer DX plug-in that you're desperate to use within Gigastudio, at least now you have a way to try it.

Many musicians now have quite a few USB devices plugged into their PCs. If you've created several Windows partitions (one for general and Internet use, and another just for music, for instance) you may not want all the drivers for these peripherals to be installed on your music partition. Since each USB Universal Host Controller is in charge of a pair of ports, the answer is to keep non-music devices, such as modems and printers, plugged into one pair, and your USB music keyboard and dongle into another pair.

Then you can disable one of your Host Controller chips in Device Manager by right-clicking on it and selecting the 'Disable' option. Your music partition will never even realise that a printer and modem are plugged in. The trick is in working out which Host Controller is in charge of which pair of ports, as this isn't always obvious (mine are simply labelled 24D2, 24D4, and 24D7). The way to do this is in Device Manager: switch from the default view, 'Devices By Type', to 'Devices By Connection', so you can see what's plugged into each port.

Although I know that some musicians dislike copy-protection dongles, I've always preferred them to hard-disk authorisations, since a dongle and its contents always survive system crashes and hardware and software upgrades, and can even be moved from computer to computer. However, this month I ran into some problems with a dongle.

The Cubase SX3 update comes with an authorisation code to upgrade your existing Syncrosoft dongle from version two to version three status, and requires Internet access to do so. Like many musicians, I don't keep Internet software on my music partition, and I don't intend to, but fortunately Steinberg do provide details of how to update the dongle on another computer that does have Internet access, and they say you can do this from a laptop, or even via an Internet café machine, as long as the PC in question has a USB port. Unfortunately, this is where I ran into problems, and as some of you may encounter the same ones, I thought I'd tell you what happened.

Steinberg always warn you to remove their USB dongle before installing a Cubase update, to prevent Windows attempting to install USB drivers for it. The Cubase SX3 update installs the latest drivers for the dongle, and once this has been completed you can plug it back in again, safe in the knowledge that its drivers are ready and waiting. To update the dongle on another computer you need to first install the 5.5MB 'Copy Protection Driver' software from the Update DVD-ROM, and then you plug in the dongle. I did this on my laptop and, as expected, Windows then found the dongle and offered to search for a driver for it. As usual, I declined. Unfortunately, as I found after ringing the Steinberg helpline in despair after Syncrosoft's License Control Centre refused to detect my dongle, this is the one time when you do need to ignore Steinberg's normal advice and let Windows install a driver, since Syncrosoft's software doesn't do it automatically. Doh! After I did this, I was able to successfully update my dongle. While you're online, it's a good idea to download the new 5MB Cubase SX HTML help file. For some reason that I can't fathom, it isn't included on the DVD-ROM. You can find it at ftp://ftp.pinnaclesys.com/Steinb....

Personally, I don't want to have to install personal Firewall, anti-virus and spyware protection on a music PC, even if I don't run such utilities when making music, but it's getting increasingly difficult to keep the Internet away from a music-only PC. At some stage I suspect we'll all have to give in, especially since I can't see many Internet cafés letting you install dongle drivers and software on their machines!