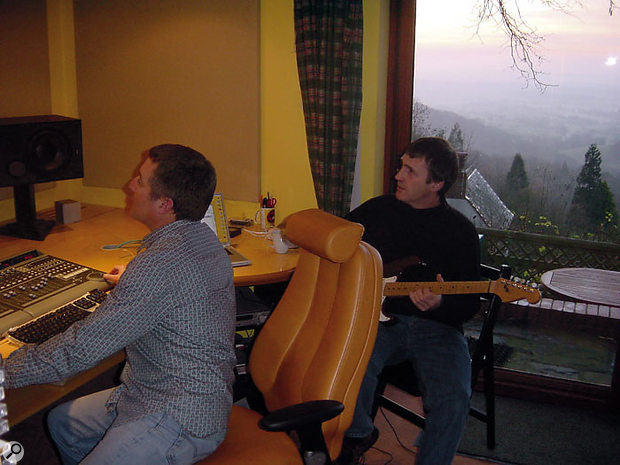 Is writing TV show theme music as easy as it might seem? We follow the progress of the music for a recent BBC series to find out.

Listening to TV theme tunes and incidental music, it's easy to come to the conclusion that producing them must be easy money — write half a minute of not particularly innovative music in your tea break, then sit back and wait for the cash to roll in. Money for old rope! In reality, it's much more difficult than it seems, and to find out just how difficult, I hatched a plot with established composer/producer David Lowe, who's had chart success with Touch and Go, and has written music for BBC News, Wildlife On One, Horizon, Grand Designs and Fifth Gear. He agreed to let me co-write and record a TV theme tune he'd been asked to submit. The idea was that by being part of the process, I'd be able to appreciate exactly what goes into it.

The project was for BBC Bristol and was a new series called Royal Gardeners, presented by none other than Alan Titchmarsh [the series ran for five weeks from November of last year]. Immediately, the programme brief conjured up, for me, visions of Elgar and classic majestic music. The initial suggestions from Kath Moore, the series producer, were for something big, grand and contemporary sounding, with a counter-theme running through that represented Alan's relaxed style. Armed with this brief, and not having seen any of the title shots, David and I set about roughing out a 25-30 second piece of music based around a few simple guitar and piano chords, a drum loop, a bass part, and some guitar motif overdubs. David had already come up with a rough framework, which we changed a little as the guitar parts were written.

Because theme music is heard so many times, I thought it would be a good idea to record the acoustic guitar part, which was one chord per bar, as separate chords, so that there would be no chord-changing noises or other artifacts audible to the listener. This worked well, and David soon arranged the chords within his Logic Audio sequencing software, his composing environment of choice. The repeating guitar motif was recorded using a Fender Stratocaster played through a Line 6 Pod XT guitar preamp, with tempo-locked echoes courtesy of Logic 's Tape Delay plug-in. We used David's Spectrasonics Stylus loop-based 'Groove Control' instrument plug-in for the rhythm grooves, as it provides a quick way of sketching something out, even if you replace the part or add to it later.

We took this composition to the point where there was little more than a hint of a melody, but we both felt the theme had a nice feel, so Dave played it over the phone to Kath. This is pretty common practice but, as I've since come to realise, it's also fraught with danger, as anything happening at the bottom end is almost completely lost. Kath seemed to like the feel, so we emailed her an MP3 file to listen to. Her emailed reply indicated that she felt the music wasn't 'big' enough or grand enough to compliment the spectacle of huge houses with acres of gardens and water features, which I interpreted as meaning that perhaps we needed a touch of regal brass or other pompous instrumentation after all, albeit mixed in with contemporary drum loops. She explained that although Alan Titchmarsh had what she called a 'cheekie chappie' vibe, the show wasn't being presented in that way, so the music shouldn't be too flippant or lightweight.

As David was busy the next day, I worked on some ideas myself and came up with some brass and string lines that David quite liked, but which he rearranged slightly, making them fit the structure of the piece rather better and also helping to lead to a more natural ending. Endings are very important, as theme music rarely works with a fade. Most often, the music should have a natural ending that can lead into a pad or other linking sound to bring in the main body of the programme. We played the track to Kath, who felt we had strayed too far from her 'contemporary' brief and were in danger of sounding like Songs of Praise!

Back To The Drawing Board

David and Kath decided the best way forward would be to get together at David's studio with some visuals to look at, so we decided to postpone any further work until we could discuss some ideas while she was with us. We'd be able to get some direct feedback from her on what she felt worked and what didn't. 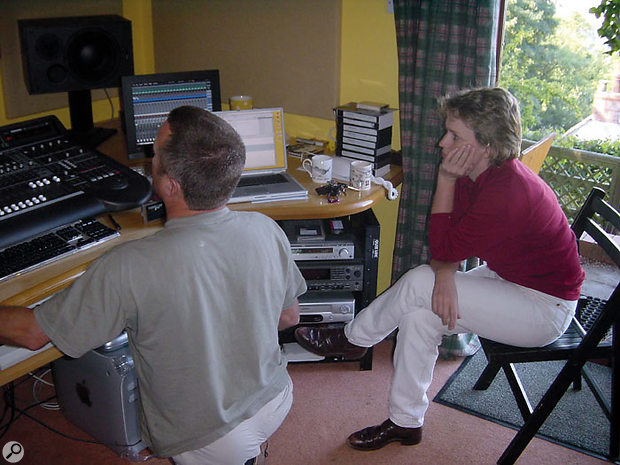 Producer Kath Moore joined David in the studio to provide instant feedback on the direction of the theme.

When Kath arrived, she showed us some pictures from the programme which she'd cut to tracks by Coldplay. The music established a modern, cool, optimistic, slightly laid-back feel to the show and worked well cut to the majestic garden shots. Kath felt the theme music should be much more contemporary too. To show us what she meant by wanting a 'big' sound, she played a piece of commercial music that she felt had the right amount of weight and strength. It turned out that what I had interpreted as meaning more majestic classical-style orchestration was, in fact, achieved with a synthesizer pad that had more weight at the low end!

This was a valuable lesson for me, and underlined the oft-mentioned fact that TV producers, who are used to working with visuals, don't necessarily speak the same language as composers, who talk in terms of instruments and parts. This doesn't mean that the producers don't know what they like, of course, but sometimes they don't express it in a way that musicians understand, and I'm sure exactly the reverse is true when musicians try to get their ideas across to producers. Kath explained that this language issue was one reason why TV producers tend, where possible, to stick with composers they know, because they do eventually develop an effective way of communicating what is wanted. David is valued in this area because he has an ability to come up with the right solution.

In His Own Words: David Lowe

Once again, this project proved to me that you can get instant results by being together in the studio with the TV producer. It's not often possible, because of producers' schedules, but if you can try to do this at an early stage it will save endless demos travelling back and forth. For me, simple, fresh and instant musical ideas are the most satisfying. A sizzling stir-fry, rather than a stodgy stew that you've been simmering for hours.

Those ideas often happen when collaborating with other musicians, or when the TV producer's sitting behind you saying "Give me something now, this minute!" With any piece of TV music, I aim to do something good and exciting, hopefully a track that viewers notice and enjoy. When I was working on BBC News, one director simply said "I want a piece of music that makes the hairs on the back of my neck tingle." I think that's a great universal brief for TV music, and a challenge. If you can achieve that, you won't go far wrong.

Kath showed us the visuals for the title scenes and David imported some of them from her digital camcorder into iMovie so that we could mock up a title sequence in Logic using its Quicktime window. That way we'd be able to watch it as we experimented with the music. Having the visuals made the job much easier, as did watching excerpts from the show where the other pieces of commercial music had been used. David replayed Kath our efforts so far, and also brought out some other music he'd composed previously, to try with the pictures. Eventually one track came up that we all thought had exactly the right feel. We didn't really want to use it, as it had already been heard on another show, so we decided to try to record something there and then that had a similar structure and instrumentation, but which wouldn't be confused with David's original track. 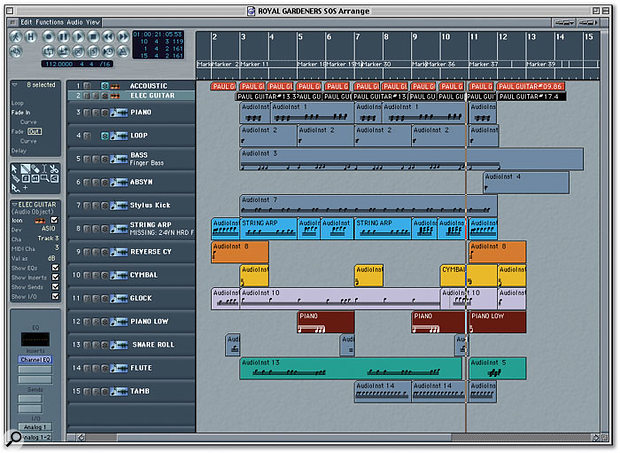 The partially completed music for Royal Gardeners, safely inside Logic.

Like our first compositional attempt, this relied mainly on acoustic guitar, electric guitar, piano, bass and a drum loop, so I came up with a chord sequence that was different to David's reference piece but which I thought had a similar feel. Both David and Kath seemed to like what they heard, so I recorded the part in the live room, against a click, using my Taylor Big Baby acoustic guitar miked up with David's Rode Classic valve mic. This was done in minutes, then David quickly added some piano. It was beginning to sound good, with the right feel, so I went on to overdub some very simple electric guitar lines, including one where I picked out a constant note over the chord changes — something like a pedal note.

The original piece also included a little improvised guitar right at the end, which Kath liked. However, she felt it should come in earlier, so David set up Logic in loop-record mode and I improvised over the chord sequence for a couple of minutes in the control room, so that I could gauge which styles Kath thought were appropriate. This worked really well, because it was very obvious when she liked something and when she didn't — she gave me lots of very useful and encouraging feedback that helped us get the part down in just a few minutes. I also recorded some single electric and acoustic guitar chords and notes so that if David decided to rework the ending, he would have enough guitar parts without me having to come back and try to match the sound at a later date.

Because we recorded rather more than we actually needed, David could pick the parts he felt would work best. In this instance, the music had to be structured to build up and to include changes that the picture editors could cut to. In the case of a piece of music around 30 seconds long, this means bringing in something new every couple of bars or so. This is a vitally important part of theme-music composition that is often overlooked — the dynamics of the music must augment what the picture editors are trying to achieve, as they invariably prefer to cut to the music. Getting the pacing right is David's forté, so he spent some time chopping and rearranging what we'd done so far.

My guitar parts ended up sounding a lot more structured than when I'd first played them, and he also added some great supporting piano, bass lines and synth parts. The melody part of the music hung mainly on the edited guitar improvisations, with everything else providing a nice underlying feel. A couple of drum fills to underline cue points and the job was pretty much done, though David also did a three-minute remix of the piece by combining different layers of instrumentation. He told me that he usually does this as a matter of course these days, because the producers will often pick something out of the extended mix to use as a link or sting elsewhere in the program.

Kath walked out of the studio with 'music to go', and apart from a few minor changes later with the picture edit, the final music had been written and completed in a couple of hours.