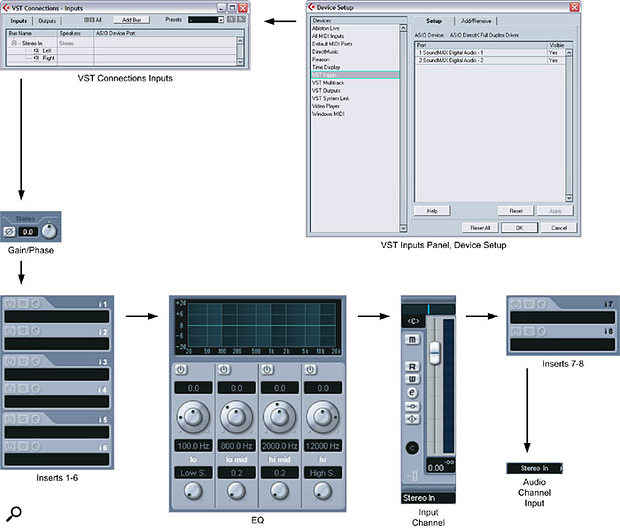 Input channels: This diagram demonstrates the flow from the physical inputs through an input channel, before the signal reaches an audio channel. FX channels have the same basic signal flow.

While Cubase 's graphical environment makes the application easy to use, it's not always clear exactly where signals are being routed. This month, we open the virtual bonnet and take a look at signal routing in the VST 2.3 audio engine used in both Cubase SX and Nuendo 2.

Back in the Cubase Notes column for March 2002 we covered the underlying audio signal routing in Cubase VST 5.x, and it turned out that many people found this explanation of Cubase 's not-always-obvious audio signal path helpful. With this in mind, I thought it was time to revisit the subject, since version 2 of Cubase SX / SL inherits the new VST 2.3 audio engine from Nuendo, featuring a completely different architecture for the way audio is handled in Cubase — different even compared to the first version of SX/SL.

The place to start when exploring Cubase 's signal routing is getting audio into the application in the first place. With suitable audio hardware installed in your computer and the appropriate ASIO device selected in the VST Multitrack page of the Device Setup window, the physical audio inputs available are listed as mono channels in the VST Inputs Device in the same window. (Incidentally, this Device page effectively replaces the VST Inputs window found in previous versions of Cubase.)

Inputs can be given more meaningful names in this page, such as 'Keyboard L', for example, and made Visible or not, which is another way of saying 'enabled' or 'disabled'. All of the available inputs are enabled by default and it's arguable whether the small amount of system resources used for each active input warrants disabling the ones you might not be using. Even so, laptop users (or indeed, anyone using their computer's internal audio hardware) may want to disable the inputs, as they will often use the computer's internal microphone (if it hasn't already been muted or disabled in the appropriate Windows Control Panel or Mac System Preference). I'd hazard a guess that most users won't want to use the computer's built-in microphone when working with Cubase, although I have found this a useful way of recording interviews when put on the spot — the words 'sledgehammer' and 'walnut' spring to mind!

Cubase will normally create a stereo input buss for you by default, but you can create this or additional input busses by clicking the Add Bus button along the top of the VST Connections window. The Add Bus window will appear, and you can choose a configuration (the number of channels) for the input buss. Most of the time you'll want to choose either Mono or Stereo. 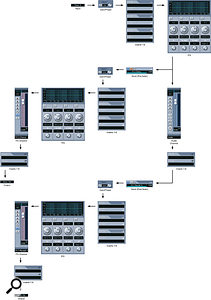 Audio channels follow the same basic signal-path structure as input channels, but with additional provision for pre- and post-fader sends to FX channels. VST instrument, Rewire and group channels behave in exactly the same way as audio channels, despite taking their inputs from a variety of different sources.Each input buss is given an input channel in the Mixer window, and you can use this channel to monitor and process the incoming audio signal before it reaches an audio track that's been assigned to record from a particular input buss. For example, you could record an audio signal with a compressor plug-in already printed in the signal path, by using an insert effect on the input channel, as you would any other channel on the Mixer. And while I personally find this approach less flexible (compared to always recording a completely dry signal), I know there are many people who feel completely the opposite way. You can toggle the visibility of the input channels on a Mixer window by clicking the Hide Input Channels button in the upper-right area of the Common Panel.

In terms of the signal flow within an input channel, the signal comes from the input buss and is first adjusted by the channel's Gain and Phase controls, if they're set. The signal then passes through the first six insert effects, one after the other, before being processed by the built-in Channel EQ. The main channel controls come next, such as fader, pan control and mute button. It's interesting to note that when Mute is enabled, processing used in the previous stages remains active so that there's no audible glitch when you toggle the Mute button on a channel.

After the main channel controls, the signal passes through the seventh and eighth insert slots before reaching the output stage, where the signal will be sent to any audio track that uses the input buss represented by a given input channel as its audio input source.

However, perhaps the most useful and interesting aspect of the input buss/channel architecture is that it's possible to create multiple input busses that use the same physical inputs on your audio hardware, which means you can end up with multiple input channels on the Mixer per physical input. This can be especially useful if you have a limited number of physical inputs that you use to record a variety of different sources, such as keyboards, a guitar and vocals. In this example, you could create three different input busses in the VST Connections window and configure each input channel differently, as suitable for the given sound source. If you have your input busses appropriately assigned to your audio tracks, when you plug in a different instrument your guitar track will be ready to record from the guitar input buss with all the appropriate settings.

Once a signal reaches an audio channel, either when you're monitoring from an input buss or playing back from the corresponding audio track on the Project window, the signal flow takes much the same path as it does through an input channel. Firstly, the signal can be altered by the Gain/Phase controls, before passing through the first six insert effects, followed by the built-in Channel EQ. At this point the signal is sent to any pre-fade send destinations, such as an FX or group channel, or an output buss, to allow you, say, to integrate outboard effects or perhaps create individual headphone mixes. After this come the regular channel controls and the final two insert effects, and at this point any normal (post-fader) sends you may have active are made before the signal reaches the output destination, which can be either a group channel or an output buss.

The flow of audio through an FX channel is essentially the same as for an input channel, which is to say that it doesn't have any sends, while group, VST Instrument and Rewire channels behave in the same way as regular audio channels (with sends), with the exception that Rewire channels take their audio input from another application running alongside Cubase. Even though FX channels don't feature send controls, you could always use a group channel instead, should you want to send part of a send effect to another FX channel. This could be useful if you wanted to send part of your reverb to a harmoniser, for example!

In order to get audio from Cubase 's Mixer through your audio hardware, you'll need to have at least one output buss defined in the VST Connections window. The theory behind output busses is exactly the same as for input busses, with the obvious difference that output busses are used to get audio out of the Mixer and to your physical audio outputs, rather than into the system. The physical outputs available to Cubase are detailed in the VST Outputs Device in the Device Setup window, where — as with inputs in the VST Inputs Device — they can be enabled and disabled via the 'Visible' option.

Outputs: Each output buss you've created has a dedicated output channel on the Mixer window, replacing the need for a dedicated Master channel, as in previous versions of Cubase.

At least one output buss should be created by default, and you can create additional output busses in the same way as input busses, making sure you have the Outputs tab selected instead of the Inputs one. The combination of the VST Outputs Device and the VST Connections window replaces the old VST Outputs window in older versions of Cubase. One advantage long-time users will notice is that, as with input busses, you no longer have to detail with outputs only in stereo pairs. Each output buss is represented on the Mixer by an output channel, and this concept replaces the idea of Cubase having only a single master output, as in previous versions. The signal flow of an output channel is the same as for an input channel, so the idea of Master effects is now replaced simply by insert effects on the appropriate output channel instead. This is where you would place any final dynamics or other processing you want to apply to the entire mix.

It's well worth remembering that since dither should always be the last process your audio passes through, insert slots seven and eight are the best candidates for a dither operation, because they are the final stages before the audio signal reaches an output buss and then a physical output.