Join us as we delve into dynamics in Reason 7.

In the age of Reason 7 and Rack Extensions, Reason's complement of dynamics processors is potentially huge. But what type should you be using, in what place in your mix, and why? This month we'll answer all of those questions and more as we get back to some compression basics in the first of a dynamics two-parter.

'Compression' relates to a few things in recording technology, and what we're talking about here, specifically, is dynamic range compression. A compressor or limiter reduces the difference in level between a track's quietest and loudest level. This can imbue more punch and presence, sometimes colouring and thickening the sound in likeable ways. Also, because sources end up varying less in level, it can make mixing easier.

Compressors and limiters available in Reason behave just like their analogue and plug-in counterparts, and exist in a few different forms. Most, like Reason's built-in channel dynamics module, are broadband designs; they respond to and process the entire frequency range of a signal. These are best used on individual tracks that carry just one source, like vocals, bass guitar, snare drum and so on. Compression aficionados will select specific models because of their exact dynamic and tone-shaping flavour, and their suitability for different instruments and voices — something that comes from experience and experimentation.

Other compressors, like the MClass Maximizer, are honed for 'finalising' or mastering use, and are referred to more correctly as limiters rather than 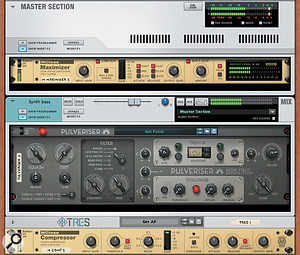 Reason has some fine bundled compressors. Shown here is the MClass Maximizer in a typical 'finaliser' position in the Master Section; the powerful Pulveriser inserted within a Mix device, and an MClass Compressor patched onto a synth's output. compressors. They'll typically have a smaller set of controls, and be optimised to cope with fast transients without radically changing tone quality. Some aim to 'glue' a mix and lend it extra coherence, but for the most part they're used to increase the average level of your song by squashing the loudest transients and seeming to make everything loud! This isn't always a wise thing to do, and can actually rob a mix of dynamism and energy... but the ethical considerations are best left for another SOS article.

Finally, there are multi-band compressors, of which currently only one exists for Reason, as a third-party Rack Extension. These have a number of compressors working in parallel, separately processing the bass, lower midrange, upper midrange and treble of your signal. This sometimes allows more potent or transparent compression of a whole mix, because the independent nature of the compressors won't, unlike a broadband design, cause a ringing cymbal (a mostly high-frequency sound) to vary in volume when a loud bass drum (mostly low frequency) comes along. And that's picking just one example. So these can be good for drum overheads, pianos, some guitar parts, entire mixes, or any signal that spans a wide frequency range. They're harder to work with though, and aren't always the best choice.

Since the dawn of Reason 6, with its modular mixer, you can get in on plenty of compression action without touching a Rack device. There's a compressor built in to every mixer channel, whether you like it or not, and a Master Compressor always available to treat the main stereo mix.

To apply some compression to a vocal track, say, just scroll up in the mixer, find the Dynamics section, and click the ON button next to the word COMP. If the Dynamics section is minimsed, by the way, just double-click the word Dynamics to open it. This done, good results are easy to come by. Both lowering the Thres (Threshold) and raising the Ratio knobs increases the amount of compression, and you'll see any resulting gain reduction indicated on the LED meter. Threshold is the level at which compression kicks in, incidentally, so you'll need it set lower for quieter signals. Ratio then controls the 'aggressiveness' of the gain reduction, when it's happening. 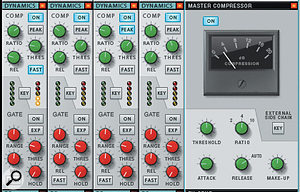 Reason puts some other DAWs to shame with flexible compression available on every mixer channel. There's also a Master Compressor modelled after an SSL console unit. nice feature of the channel compressor is automatic make-up gain. This helpfully and invisibly compensates for the gain reduction that's inherent in the compression process, and keeps your signal at a healthy level. Other compressors, as we'll see shortly, often require that to be set manually. However, there are more things to play with. Engaging the FAST button makes the compressor respond quicker, which you might well want for drums and other transient-rich sounds. Similarly, PEAK switches the level detection to an instantaneous rather than averaged-out (RMS) mode, which also makes for a crisper response. The REL (Release) knob controls how long it takes for compression to 'calm down' when the signal level falls. The lowest settings (round 100ms) can cause pumping and chattering effects, slightly higher (200-300ms) can help tease out extra sustain from drums, and all the way up (1s) keeps the compressor mostly 'on' even if your signal level is quite volatile, for potentially the smoothest and most squashed-sounding effect.

Reason's channel dynamics is quite transparent as compressors go, but the Master Compressor is less so. This is permanently strapped across your main stereo output with the idea that it'll provide a bit of extra weight and 'glue' to a whole mix. You have to switch it on to use it, and then you'll find Threshold and Ratio knobs here too. The Release parameter includes a handy Auto setting that adapts momentarily to different dynamic behaviour, while an Attack knob controls how quickly the compressor clamps down on louder sounds. As always, experiment to see what works best. Finally, there's a Make-up knob. You need that to restore the level that the Master Compressor will initially rob you of.

It's not a bad idea to reserve using the Master Compressor until your mix is fairly complete in other ways, and even then keep switching the compressor on and off as you set it up, to get an A/B comparison 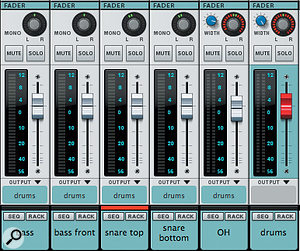 Output groups are just a right-click away in Reason's mixer, and once you've created one (with its distinctive red fader-top) compression can be applied via its Mix device in the rack. of level and tone between original and compressed signal.

Alongside the mixer's compressors, Reason comes bundled with a few rack compressors which have their own character and capabilities. For treating individual audio tracks and instruments with more attitude, try Pulveriser. Like any Reason effect you can create this as a separate entity in the rack, or within the Insert FX section of a Mix Channel or Audio Track device. Then right-click an empty part of its front panel and choose Reset Device. This 'zeros-out' the other features of Pulveriser — the distortion and filter — that you probably wouldn't want for a vocal track (for example). Then adding nice, rich compression is as easy as turning up the Squash knob. There's automatic make-up gain here too, so there's almost nothing else to do.

Reason's MClass Compressor can be used in a similar fashion, and works really well on individual tracks. All the usual suspects are there: Threshold, Ratio, Attack and Release (with an automatic 'Adapt Release' option). But there's also a Soft Knee mode; this smooths the onset of compression, especially at high ratios, and prevents the effect being too brutal. There's no automatic make-up gain, so use the Output Gain knob to restore lost level.

For mastering-type control of your final mix level, look to the MClass Maximizer. You wouldn't normally use this on individual tracks, rather its natural home is inside the Master Section's Insert FX area. Also, this

is technically a limiter rather than a compressor: it has a fixed infinity:1 ratio, which means signals aren't allowed any level freedom beyond the threshold level, which also happens to be fixed at 0dB.

Maximizer offers two ways to get your mixes loud and full, but not clipping and causing nasty digital distortion. One is a Soft Clip feature. Turn on that section and turn up the Amount knob, and input signals simply can't go beyond 0dB, into the red, though you might gain some reasonably pleasant-sounding distortion along the way. The other is the Limiter. If you set this to Fast attack mode, and also engage the Look Ahead mode (which introduces a small amount of latency) it's a true 'brick wall' design, permitting no 'overs' at all. With other settings (ie. no look ahead, or slower attacks) you could still get momentary hard clipping, but then you'd use Soft Clip as well, for a double-pronged approach. Whichever way you choose, use the Input Gain knob to 'drive' the limiter or clipper if necessary.

If you've multi-miked a drum kit, a piano or a guitar amp, you might well want to apply compression to all the tracks in one go. This so-called 'bus' or 'group' compression is really easy to do in Reason 7.

First, locate the channels you want to compress in the mixer. Click the first to select it, then shift-click the last. Or, Command-click (Mac)/Ctrl-click (Windows) to select lots of separate channels. Then right-click a channel for a contextual menu and choose Route To / New Output Bus. A new bus channel is created, with all the channels you chose routed to it. Now just find its Mix device in the rack, create a compressor inside its Insert FX area, and you're away.