In Mark Wherry's recent review of Cubase 7.5 (http://sosm.ag/feb14-cubase75) he commented on the potential confusion created by multiple features that perform similar functions, and the remote control options are a case in point. A typical modern MIDI master keyboard/controller will include something like eight assignable faders and eight rotary knobs, and to make full use of them, you have to get your head around Cubase's Generic Remote, Track Quick Controls (formerly 'Quick Controls'), VST Quick Controls (VSTQC, new in v7.5) and the Remote Control Editor (RCE). Being blunt, Steinberg's 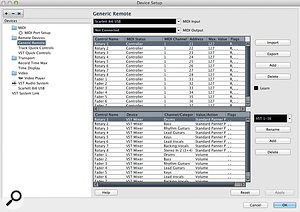 The Generic Remote pane of the Device Setup panel allows you to configure your hardware controls and link them to parameters within Cubase. documentation of these related and overlapping components leaves a little to be desired — but don't worry because this month I'll explain how to decide on the best way to take advantage of your control surface or controller keyboard in Cubase. (If you don't yet have a suitable hardware controller and want to acquire one, I'd recommend that you opt for a model with continuous rotary controls rather than fixed pots, as these tend to be much less restrictive in use.)

I've previously discussed the Device Setup options for the Generic Remote (SOS December 2010) and the original Quick Controls system (SOS July 2009) in detail, and as these articles are free to access on the SOS web site I won't retread too much of that ground here. Essentially, the Generic Remote is a system that allows any MIDI controller device to be configured to control your choice of parameters in Cubase. Via the Device Setup options, you can define the number of hardware faders and knobs available and link each of those controls to a specific 'target' parameter in Cubase. You could include parameters of a VSTi, but given that the Quick Controls system is better for that the most appropriate targets for the Generic Remote will be found in the VST Mixer — things such as fader level and pan setting. As the Generic Remote provides multiple banks of assignments, you can actually cover a lot of ground this way, even if you have only a few hardware controls. 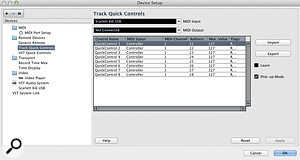 The Track Quick Controls (and very similar VST Quick Controls) panel does a similar job for the two Quick Control systems. system is used to control parameters at the individual track level, whether it's an audio or MIDI track. Back in the Device Setup pane you establish a link between a maximum of eight of your hardware controls and the eight software 'quick controls'. If you then select, for example, an audio track and open the TQC section in the Inspector, you can specify up to eight parameters to be governed by your hardware controller at the track level, including insert effects parameters, EQ settings and send levels.

You can define the same hardware controls for your eight TQCs within the Device Setup pane as you already used within the Generic Remote pane — but you must take care not to have both systems 'active' at the same time, as you'll otherwise inadvertently send data to two different destinations at once, which can cause mayhem! The TQC system can simply be switched off in the Inspector of the selected track. For the Generic Remote, the simplest option is to return to the Device Setup pane and disconnect the Generic Remote's MIDI input. That this is a bit clunky is unfortunate, but it works — and you can easily re-enable it when the time comes to mix.

The v7.5 update added the new VST Quick Controls (VSTQC) system to this already complex mix. VSTQC works in a similar fashion to TQC, in that you can assign hardware controls to the eight VSTQCs via the Device Setup pane. Note that if you only have eight physical controls, you can also assign them to the VSTQC system that you've already assigned in both the Generic Remote and TQC systems. When you then create an Instrument track, or add an instrument to the VST Instrument Rack and then select the associated MIDI track, the TQC assignments are already defined for you in the Inspector Panel, and are based on the VSTQC assignments.

These assignments come from the final piece of the remote-control jigsaw: the Remote Control Editor (RCE). Right-clicking

The Track Quick Controls (TQC) Inspector panel allows you to see and (for tracks not linked to a specific VSTi) define the parameters assigned to each of the eight TQCs. Note the preset button now in this pane, introduced in Cubase 7.5. on the VST device within the VST Instrument Rack allows you to open its RCE. The panel allows you to create multiple banks of eight virtual rotary controls and link them to specific parameters in the VSTi.

For many VSTis, the RCE will contain a number of predefined parameter links. The first eight will form the default selections that appear in the Inspector TQC panel for the associated track. You can edit these default RCE selections (and labels) if required. These are 'global' settings and, once defined in the RCE, they'll appear for any instance of that plug-in in any project.

Linking a physical hardware control to a specific software parameter via the RCE is a two-stage process. First, you need to have completed the steps mentioned above and configured your hardware controls via the VSTQC section in the Device Setup pane. Second, in the RCE, activate the 'MIDI Learn' option (the 'L' button in the control strip located top-right), select one of the RCE virtual knobs and then, in the editor window of the VSTi, use your mouse to move the required parameter. This links the VSTi parameter to that RCE control knob (one software control is linked to another). Once you've finished editing, press the RCE's Apply button to enact the changes.

If you do change any of these first eight RCE default assignments, make sure you press the 'Get default QCs from plug-in' button (the one with the curved arrow icon) in the associated track's TQC Inspector panel so that it updates to reflects the new RCE assignments.

So far, so good. Indeed, if you only need to control a maximum of eight parameters in your VSTi, you can look away now. If you need yet more control, though, read on, because it's possible to use the VSTQC system to access more than eight parameters in each VSTi. To do this, you need to add additional strips of eight virtual knobs to the VSTi's RCE panel. Link them to VSTi parameters via the 'learn' process described above and then press the RCE's Apply button to make those assignments active.

The track Inspector TQC panel will only ever show the first bank of eight of the RCE assignments. However, 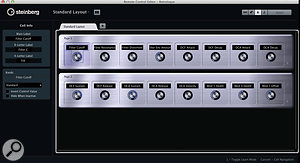 The Remote Control Editor (RCE) panel allows you to link RCE virtual controls to VSTi virtual controls. for a VSTi in the VST Instruments Rack, you can use the 'Page' drop-down menu to switch between the banks of eight RCE controls. If, for example, you select page two for a particular VSTi, your eight hardware controls assigned to the VSTQC system will automatically switch to controlling that bank of eight parameters. In this instance, VSTQC assignments take precedence of the TQC assignments.

This is very neat but not without a rather odd catch. This page system works for third-party VSTis and the bulk of Steinberg's own, but it doesn't work with Steinberg's Halion Sonic (SE or full versions), in which the 'page' option is replaced by a 'channel' drop down. While you can view the RCE panel and use the eight default assignments, you can't actually edit the RCE panel contents in any way (at least none that I've found). I suspect that there are elements of the Halion Sonic QC system and the overall QC system that, at present, are rather uncomfortable bedfellows. Indeed, the QC system within Halion Sonic could probably fill its own article — although I suspect my head might explode if I tried to write it!

This whole subject of hardware control in Cubase will inevitably leave you scratching your head on occasion, but I promise that things will fall into place without requiring too much in the way of mental gymnastics. Thankfully, then, once you get things working as required you can save your settings for later recall in case things go pear-shaped. To do this, go to the Device Setup panel, where you can export your Generic Remote, TQC and VSTQC assignments as XML files, which can be imported again when you wish to recall your settings.

A new feature in v7.5 is that you can now save TQC assignments 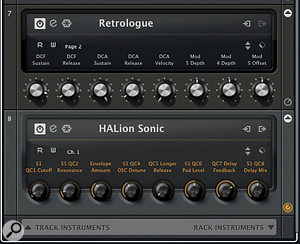 In the instrument rack, most virtual instruments provide a 'page' option allowing you to select which bank of eight RCE parameters you want to control via the VSTQC system. as presets from the track Inspector panel. This is only really useful for tracks not linked to a VSTi (eg. audio tracks) as, for VSTis, whatever changes you make to the TQC assignments within the Inspector the RCE assignments will always take precedence.

Despite some obvious quirks that I suspect result from the progressive implementation of the various hardware control systems described above (including the direct 'MIDI learn' facilities built into many VSTi, which I've left out of the discussion here simply because the QC system is more efficient), using a generic MIDI keyboard/controller with Cubase can bring some genuine workflow improvements over endless fader sliding and knob twiddling with a mouse. If you do experience problems (for example, the TQC or the VSTQC suddenly stop working), a quick visit to the Device Setup pane to import your saved settings, followed by hitting the Apply button, will often wake things up again.