There seems to be a nasty bout of CPU throttling going around. But don't despair: we may have a cure... 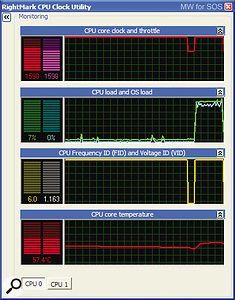 With Rightmark's CPU Clock utility, you can immediately tell if your audio has just glitched because of CPU throttling, or a high software load.

Many musicians seem to be struggling with the side-effects of CPU throttling, where the clock frequency is dropped to a lower value whenever you're not taking advantage of the full available power of your processor. This process saves energy and reduces heat dissipation whenever the system is idle and is particularly important with laptops running on battery power, since it extends battery life. However, each time the clock speed changes up or down, you're likely to hear a momentary audio glitch, so when running audio applications it's important to force your CPU to stay at maximum clock value, to maintain a smooth stream of audio.

I first discussed both CPU throttling and Windows Power Schemes way back in SOS December 2003 when the first Pentium‑M laptops appeared (/sos/dec03/articles/pcnotes.htm), so such audio problems are nothing new. However, throttling schemes are becoming increasingly complex, and in some cases (mostly laptops) impossible to disable, resulting in a computer that's unsuitable for audio purposes.

To avoid any problems you should first make sure your Windows Power Scheme is set to 'Always On' under Windows XP, or 'High Performance' with Windows Vista and Windows 7. If at all possible, you should also permanently disable any hardware throttling scheme in your computer's BIOS, the most common being EIST (Enhanced Intel Speedstep Technology) and C1E enhanced halt state, although, sadly, many laptops don't offer these options in their BIOS, rendering them hopeless for audio purposes. Also, you should resist any temptation to install specialist overclocking utilities from your motherboard manufacturer, such as Gigabyte's EasyTune, which also result in audio drop-outs for the same reason: changing the processor clock speed behind your back. 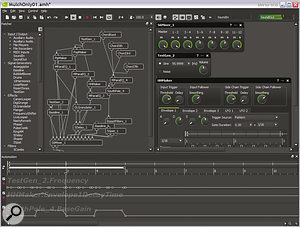 The latest version of AudioMulch contains many new features to tempt the sonic experimenter.

But how can you find out whether or not your CPU is being throttled due to an incorrect BIOS or Windows setting? After a few stray glitches on my own PC this month, I went off in search of an easy‑to‑use utility that would provide a real‑time readout of CPU clock frequency, just in case!

The handy freeware CPU‑Z (go to www.cpuid.com for more information) is probably your first port of call, since it's great for providing info about your CPU, motherboard, RAM and graphics. The Core Speed parameter on its CPU page provides a real‑time read-out, but what many people miss is that when you minimise it, the Taskbar icon continues to display this frequency, albeit in a less‑useful non‑rounded form (my 2.4GHz processor, for instance, displays 2397.74MHz).

Another contender is RightMark's CPU Clock utility (see http://cpu.rightmark.org), which, among many other functions, can permanently display a reassuring readout of the current CPU frequency in your System Tray. It also offers the distinct advantage of maintaining real‑time graphs of CPU core speeds and loads. So if you do ever hear an audio glitch, you can open it up and see if your CPU has changed speed recently, or if software demands resulted in a sudden CPU 'spike'. The only unfortunate aspect is that it hasn't been updated since February 2008, so it won't recognise some modern chip sets for its other functions, although it will probably still display your CPU clock speed. Make sure, also, that you un‑tick the box in its Advanced CPU settings labelled 'Enable Enh. Halt (C1E)', as this will override your choices elsewhere.

Windows 7 Overtakes Vista: Microsoft's latest operating system is now being used on more PCs than Vista, according to statistics from Net Applications. Apparently, Windows 7 has started pipping Vista's 14.34 percent market share to the post, with a 14.46 percent global market share. This lead perhaps seems more impressive given that Vista's precursor, the nine-year old Windows XP, never managed to be outdone by Vista and still commands a huge 61.87 percent market share. This means that XP is still by far the most popular operating system, as Apple's Mac OS X hovers at around five percent and Linux at one percent.

RAM Price Hikes: Industry insiders warn that RAM prices could rise toward the end of 2010, in response to supply shortages caused by changes in production methods. So if you're thinking of upgrading, it might be wise to do it sooner rather than later.