Once you've dragged the outputs from Thor to outputs one and two on the hardware interface, these should show up as inputs in Logic.Logic and reason are usually considered to be the most important tenets on which the basis of rational thought is founded and, in the musical world, the audio programs of the same names are also designed to work in tandem. Propellerhead's 'rack and sequencer' software has come along way since its very early incarnations and, while the program has always been intuitive and fun to work with, the included synths, samplers and effects were originally lacking in fidelity.

However, we're on v5 now, and this is no longer the case. Reason's Subtractor Analog Synthesizer, Thor PolySonic Synthesizer and Maelström Graintable Module are easily comparable in quality to their Logic counterparts. These are regularly covered in Sound On Sound's Reason technique articles, along with the program's various samplers and drum machines. Most of the latter make Apple's efforts seem pretty tired, while the loop creation facilities of Reason's Dr Rex are the best in the business.

Reason's raison d'être has always been simplicity of use, so the program has never included an audio recording system. To overcome this limitation, Propellerhead created the Rewire protocol that allows Reason (and any other Rewire‑enabled software) to transfer data between itself and a DAW such as Logic Pro. What this means in practice is that you can utilise Reason's wide range of audio sources directly in Logic. If you've tried to Rewire Reason to earlier versions of Logic, you may have given up in exasperation after being put off by dropped connections and other bugs. But the Rewire implementation in Logic Pro 9 is greatly improved and is now truly usable in a professional environment, with one caveat: Rewire isn't available in 64‑bit mode at the time of writing, so you'll have to make sure Logic is running in 32‑bit mode. To switch to 32‑bit mode:

In the relationship between Logic and Reason, the former is the master and the latter is the slave, so it's important that Logic is booted before Reason. You can load Reason from the dock, but you can also force Reason to load automatically from within Logic, as described below. Logic communicates its MIDI data to Reason via an external MIDI object and, once one is created (from the '+' on the Arrange page track list), a Reason folder will appear in the Library. If you haven't booted Reason, double‑clicking on this folder will cause it to automatically load. If you've set up Reason to create an empty rack as the default song, all that you'll see in the Reason folder is the hardware interface. If not, all modules loaded in the Reason rack will be available. Selecting a module will assign it to the selected external track.

Clicking on the '+' sign above the tracks list will enable you to create the external MIDI instrument that Logic uses to communicate with Reason.

Moving over to Reason (Alt‑tab is your friend here), you'll see that Reason is now in Rewire slave mode, as displayed in the window at the top left of the hardware interface. Drag a Thor synth from the Tool window to the Reason rack and you'll find that the synth will now have automatically appeared in the Library in Logic. If you select it and move back to Reason once more, the 'Note On' LED on the synth will flash as you play your MIDI keyboard. However, you won't hear any sound from Reason directly, as Logic is now in control of the audio outputs. Let's look at routing audio from the Thor synth back into Logic:

To make the aux appear in the Arrange window — so you can apply automation, sends and effects — you can either switch the Automation mode to Read on the aux channel strip or select it and use the Mixer Options menu item 'Create Arrange Tracks for Selected Channel Strips'. For each Reason module you want to use in Logic, you'll need to repeat the process described above.

Once the two programs are talking to each other, sequence data placed on the external instrument tracks in Logic will be played back by the assigned module in Reason via the aux in Logic. Apart from note data, you can send MIDI controller data either directly from a sequence via Hyperdraw, or via Logic's automation. There's a MIDI controller implementation PDF in the Reason folder (located in the Applications folder) that lays out all the MIDI controller data that can be used to control Reason's modules.

To automate the Filter 1 cutoff in Subtractor, for example, you'd send out MIDI controller 74. (By default, Logic assigns controller 74 to a nominal 'Brightness' parameter. In this case, however, controller 74 is actually assigned to Filter 1 cutoff.) Sequence–based Hyperdraw is turned on with the icon at the bottom right of the Piano Roll, and the MIDI controller is selected via the small arrow that appears along with the Hyperdraw display. If you've not used Hyperdraw before, be aware that it can conflict with Logic's automation, so it's probably best to choose one of the other methods to control Reason's modules. 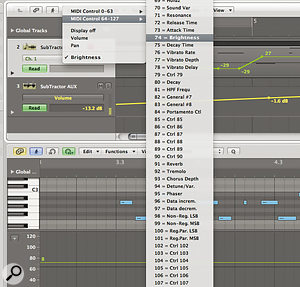 The audio coming from Reason into Logic via an aux can be processed by plug‑ins or sent out to other auxes in exactly the same way as if it was emanating from within Logic itself. There's a CoreAudio audio preference available that lets you set Rewire behaviour to either Playback, which uses less CPU power but has higher latencies, or Live, which uses a greater proportion of your CPU but reduces latency. Which setting is the most prudent to use depends upon the system and version of OS X you're running, so it pays to experiment with this parameter if you're finding you're having audio issues with Rewire.

If you have sequences already created in Reason, or are using Dr OctoRex loops, you can export these as MIDI files and import them back into Logic. Reason's sequencer is simple and fun to use and, especially if you're making beat‑based music, a nice alternative to Logic if you want to lay down some grooves quickly.

Reason songs can be exported directly as MIDI files, but the loops in Dr OctoRex need to be copied to a track before they can be exported. Dr OctoRex has a small arrow on the left of the device that reveals the editing controls. Clicking on the 'Copy Loop to Track' button creates a sequence in Reason that can then be exported via Reason's 'Export MIDI File' item, located in the File menu. If you do this, don't forget to mute or delete the sequences in Reason. Otherwise, confusion will reign as you wonder why changing notes in Logic doesn't seem to be having the effect you expect! Of course, you could just play back your Reason song alongside any created within Logic. In this scenario, Logic is the master and any tempo changes in Logic will be reflected in Reason. You will, of course, still have to route Reason's audio back into Logic through auxes to be able to hear any of Reason's sounds.

Logic can serve as a master for any Rewire client and I regularly Rewire Ableton's Live and Cycling 74's MAX/MSP programming environment via Logic to take advantage of the last's superior (in my opinion) processing plug‑ins and automation and mixing environment. Generating sounds to use in Logic via another program is part of my attempt to minimise the generic 'Logic sound' that seems to be permeating popular music these days, as lazy producers work solely and conveniently 'in the box' with Apple's flagship audio program.

Reason, in particular, provides an inexpensive toolbox of complementary sound generators that greatly expands Logic's sonic palette while providing an alternative sequencing environment. This may just provide the inspiration needed when looking at a blank Logic arrange page for the thousandth time. It's possible that Logic and Reason could become the twin pillars of your musical philosophy.