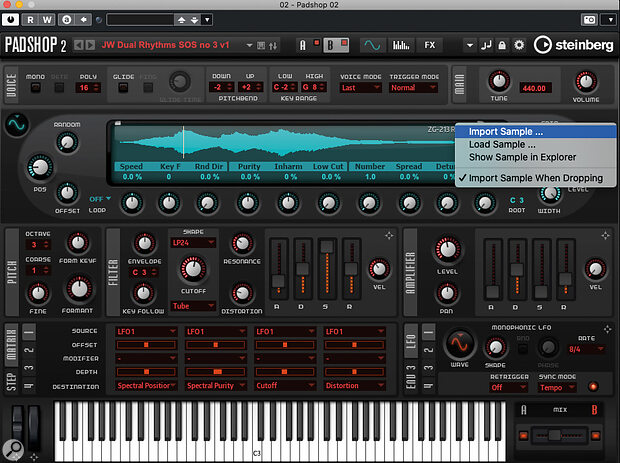 Screen 1: With its powerful arpeggiation options and the ability to import samples, Padshop 2 can create far more than the evolving pads that are its raison d’être.

Steinberg’s Padshop 2 can create much more than just pad sounds! We show you how...

Isn’t it satisfying when you discover a cool application for a plug‑in that its designers probably didn’t intend? This month I’ll take you through a great example of that: using Steinberg’s Padshop 2 synth (included in the Pro and Artist versions of Cubase but also available separately for other DAWs) to generate electronic and cinematic rhythms.

Padshop was designed, as the name implies, primarily for creating pad sounds. To that end, it combines two independent sound layers (A and B), each of which gives you the choice of spectral and grain oscillator sources, as well as its own filter, effects and modulation possibilities. It’s certainly a powerful tool for pad/texture sound design. But we can also experiment with those same elements to create rhythmic interest, and two features are particularly useful for this: sample import, and each sound layer’s independent arpeggiators.

When attempting to create sounds suitable for an electronic‑style rhythm, it probably makes sense to start with impact/hit samples, but the nature of the oscillator engines means almost any sample can provide something useful. Before you attempt to bring samples into Padshop, pop open the Sample Functions mini‑menu, accessed using the small double arrow icon in the top right of the waveform display for both the Spectral and Grain engine displays. Ensure that the Import Sample When Dropping option is ticked; this ensures that any drag‑dropped samples are copied to Padshop’s user folder, so can later be found and recalled easily in Padshop’s sample browser (next to the Sample Functions mini menu).

For our application, sensible sample choices would include a low‑frequency dominated sound (eg. a kick drum or impact sound) and a more high‑frequency dominated source (for example, a hi‑hat or other percussive sound). However, two different low‑frequency samples or two different high‑frequency samples can also be put to good use; it all depends upon the musical context. Your chosen samples can simply be dragged and dropped from your OS file browser into Padshop 2’s layer A and layer B.

Both the Spectral and Grain engines can be used for our purposes so, at this stage, pick whatever combination takes your fancy. Whichever engine type(s) you choose, the next step is to experiment with each layer’s engine settings, to coax a suitably percussive sound out of each of your samples. I find it best to work on one layer at a time: use the layer power buttons (top centre or bottom right) to solo each layer as you work.

Some of your experimentation will involve configuring fairly conventional things, such as the filter and amplifier envelope controls, to manipulate the tonality and attack/release of each sound, but you’ll definitely want to delve into the Spectral or Grain oscillator settings — this is where things can get more interesting. The first screenshot (above) shows examples that, essentially, initialise the controls beneath the waveform displays of both engines. Note that Loop mode is switched off in both engines, so we get a ‘one‑shot’ sound when triggered. In addition, playback speed has initially been set to 100%, so when triggered using C3 (the default root note) you’ll hear the sample at the original pitch. These ‘vanilla’ settings are a good ‘base camp’. From here you can start adjusting the Pos (position) dial, to identify a good playback starting point for your sample, and then the Gain, Level and Width controls can be adjusted, to create an initial level balance between the two layers.

From this point on, we’ll ramp up the ‘experimental’ component of this process. I wouldn’t be surprised if Padshop 2’s design team are the only people who truly understand how every one of the Spectral and Grain oscillator panel controls interact — there’s so much going on here — but thankfully some random button mashing (knob twiddling) is unlikely to break anything. At this stage therefore, perhaps the best advice is move it and, if it sounds good, try moving something else until it sounds even better! That said, I’ll come back to a couple of the key oscillator controls in a minute...

Screen 2: Both the Spectral and Grain engines can be used to design hit, impact or percussive type sounds, but starting with some ‘vanilla’ settings makes it easier to experiment.

Having found suitable Pos settings, lets inject some rhythm. Padshop 2’s arpeggiator is well specified so, with independent control over layers A and B, it’s easy to coax an interesting rhythm from our two sound elements. The second screenshot again illustrates some useful starting points. In the Main panel, the arpeggiator is toggled on and the Mode can be set to Chord or Step. Both settings simply mean that the MIDI output doesn’t employ the typical pitch up/down arpeggiator patterns; the active steps create a rhythmic pattern rather than a pitch‑based arpeggiation. If you wish to add pitch changes too, though, you can do that using the Steps panel’s Pitch lane.

Next, focus your attention on the Steps, Tempo and Vel panels. You can drag the Vel panel’s triangle icon to change the number of active steps (up to a maximum of 32) and adjust the tempo sync using the Tempo Scale setting. Then, it’s simply a matter of defining your pattern by activating steps within the Steps panel and adjusting the velocity of each active step in the Vel panel. Providing you have Loop engaged in the Tempo panel, when you hold a MIDI note your sound will play back with a rhythm as defined by the pattern steps. Create a complementary pattern for the second sound layer and hey presto! You can trigger a cool electronic rhythm from a single MIDI note. 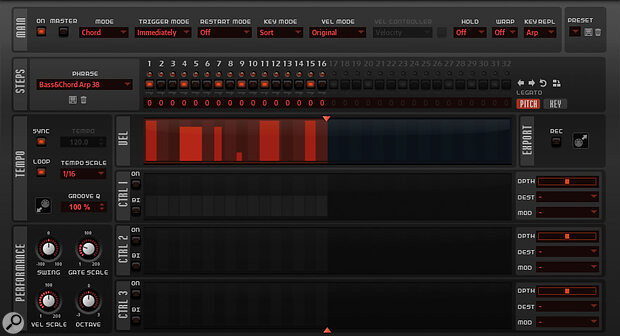 Screen 3: The arpeggiators can be configured independently for layers A and B, and these can help you conjure up all sorts of rhythmic interest.

Steinberg have populated Padshop’s arpeggiator with an extensive collection of presets that are worth checking out if you need some inspiration. But whether using presets or rolling your own rhythms, a couple of tricks can be employed to introduce further rhythmic interest. First, note that you can use different step counts for layers A and B (Screen 3). For example, if you use 16 steps in layer A and 15 steps in layer B, as you hold a trigger note and cycle through these patterns, the different step numbers mean that the patterns will shift against each other. Second, and as an alternative way to shift the rhythm, once you trigger (and hold) a note to initiate playback, you can press the Shift Phrase Left/Right buttons (with your mouse; they are found at the left of the Steps panel) to offset the pattern in the currently selected layer by one step at a time. Both approaches can produce some interesting results — sometimes very cool ones, sometimes rather unsettling.

It probably makes sense to start with impact/hit samples, but the nature of the oscillator engines means almost any sample can provide something useful.

A further level of movement can be created using Padshop 2’s comprehensive modulation system. There are too many possibilities here to consider them all, but the Matrix and LFO panels in the first screenshot show a simple example that illustrate the potential. I’ve configured LFO1 as a simple sine wave, sync’ed to cycle over two bars (8/4). In the modulation Matrix panel, I’ve used LFO1 to modulate two parameters in the Spectral engine: Pos and Purity. Pos (Position) is a good target, and if you use this you can see the LFO modulation cycling the playback start position within the waveform display as the pattern is triggered. In the Grain engine, Pos and Pitch make good initial modulation targets and the Number parameter is also a good target in both engines. Note that the strength of the modulation is very modest as even small changes in these parameters can produce quite a significant tonal change in the sound. In this example, I’ve also targeted the old favourites of Cutoff and Distortion in the Filter section for good measure. Incidentally, in both engines, a low value of the Random control produces random variations in the Pos setting and, as a result, can add some further tonal variation.

Of course, you don’t have to confine yourself to these targets or just a single modulation source; you have four independent LFOs, a step modulator, an envelope (Env 3) and (within the Arpeggiator screen) three step‑based Control lanes you can also use, as well as MIDI velocity, key follow, pitch wheel and mod wheel options. For the mod wheel, right‑clicking on Padshop’s Mix control (bottom right) and linking this to your hardware mod wheel provides a great way to adjust the blend of your two sound layers in real time.

So you can hear some examples before creating your own sounds, we’ve put some audio clips below. But with the ability to use your own samples and the almost endless parameter and modulation possibilities, you can coax all sorts of electronic rhythmic performances out of Padshop 2. So go experiment!

This audio example is divided into three sections as follows: (a) the two sources samples — a low-impact hit and a light metallic hit — can be heard before being imported into Padshop 2; (b) the same samples after importing into Padshop 2, with the oscillator engines set to the ‘vanilla’ settings shown in the screenshot, and the Pos controls adjusted (each sample can be heard three times); (c) as for (b) but with some adjustments made to both the Filter and Amplifier panels.

This audio example is divided into three sections as follows: (a) using the two sounds from audio example 1(c), a pattern is created within the independent arpeggiators for Layer A and layer B; (b) as described in the main text, the two arpeggiators are set to different step numbers (16 and 15 respectively) so that, during playback, the patterns gradually shift against each other. This section of the example plays for 16 bars so you can audition the changes as some of the shifted patterns are rhythmically interesting while others have a more unsettled feel; (c) as described within the main text, with both arpeggiators set to 16 steps, the Shift Phrase Left/Right buttons have been used to offset the patterns during playback. Some (not all!) of these shifts providing useful rhythmic alternatives and could easily be sequenced to provide performance variations.

This audio example is divided into two sections as follows: (a) the sound modulation options outlined within the main text are applied to produce some subtle shifts in the character of the sounds during playback. The pattern heard in audio example 2(a) is looped through a number of bars to illustrate this; (b) a short musical cue (perhaps intended for a sci-fi drama scene) uses this pattern and adds a second rhythmic pattern created with a further instance of Padshop 2. Two further Padshop instances are used to provide evolving pad-type sounds. For the two rhythmic instances, volume automation is applied to blend between them and, for both of instances, Padshop’s Mix control is also automated to shift the blend between the low/high frequency elements. While no Golden Globes are under threat here (!), this final example tries to give some impression of how these sorts of Padshop 2 generated rhythms might be used in context.