How to set up a multiband mastering project template in Cubase.

DIY mastering is a pragmatic necessity for many musicians, and while there are some great third-party software mastering products, Cubase already includes all you need to get started. What's more, any version of Cubase, from Elements to Pro, allows you to perform multiband processing — for example, separating the audio into low, low-mid, high-mid and high frequency bands, to give you greater flexibility/control. In this article, I'll show you how to do just that.

Even if you plan on mixing and mastering in Cubase, it's good practice to keep these two stages of a project separate, so try to resist the temptation to mix through your mastering-style processing. In fact, I think they're best tackled in separate Cubase projects, and certainly at different times, so that you come to the mastering with fresh ears. But in purely practical terms it's sensible too, since the format of different mastering projects is likely to be fairly consistent, so you can save time and effort by creating a mastering template.

While Cubase Pro includes several multiband plug-ins (eg. Quadrafuzz 2, Multiband Compressor and Multiband Envelope Shaper), Cubase Artist and Elements don't. Nonetheless, it's still easy to set up multiband processing using sends, groups and some filtering. And this approach can allow more complex processing in Pro too. You could approach this in various ways, but the main screenshot (of the MixConsole in Cubase Elements 9.5) shows a possible project setup, with seven stereo audio tracks plus the main stereo out. 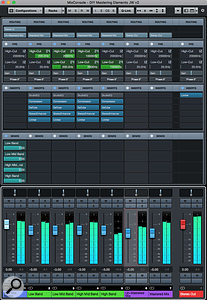 DIY multiband mastering is easy to set up, even in the Elements version of Cubase.The audio from your mixdown needs to be imported onto the blue Raw Mix Stereo track. Note the settings in the Routing rack — this first track is routed (a) directly to the purple Un-Mastered Mix Group track and (b) via four unity gain sends to the four green Group tracks. High- and low-cut filters in the Pre racks of these Groups give us multiple frequency 'bands' which can be processed independently. After processing, these four bands are recombined by routing them all to the purple Mastered Mix Group track. Both purple channels (the Un-Mastered Mix and Mastered Mix) feed the main stereo out. The purple channels allow you to hear and/or export either just the unprocessed mix, just the mastered mix, or some blend of the two (ie. multiband mastering with parallel processing).

The filters in the Pre rack are used to define which frequency range each Group track will operate upon. In this example, the Low Band channel's 200Hz high-cut filter limits this channel to frequencies below that cutoff point. The Low-Mid Band channel's high- and low-cut filters are both engaged, and configured so the channel only focusses on frequencies between 200 and 2000 Hz; the other channels are set similarly. I chose crossover frequencies similar to those found in Quadrafuzz 2, the Multiband Compressor and (for example) iZotope's Ozone; they can be adjusted, but they serve as a reasonable starting point.

The other detail to note at this stage is that each active filter in the Pre rack is set with a 24dB/octave roll-off beyond the cutoff frequency. The steepness of this slope can be adjusted between 6 and 48 dB/octave, and this affects the amount of frequency overlap between the adjacent channels.

There's an interesting and complex technical discussion to be had about how these settings and the design of the low- and high-cut filters impact on the quality of our mastering process. But that's beyond the scope of this article, and I'll leave it to better brains than mine to explain. Feel free to experiment, but as a guiding principle, make sure adjacent bands share a crossover frequency, and that these filters turn over at the same frequency. For instance, having the high-cut at 200Hz on the low channel requires a low-cut filter at 200Hz on the next.

What about the processing in each band? The second screen shows my basic setup for the High-Mid channel. There are four active plug-ins, but I've also inserted an EQ (which is bypassed by default) in case some surgical intervention is required on any band. I've inserted the same processors on the other bands and, with only a few exceptions, the settings could probably be the same for each of the four bands.

For any mastering task, it's sensible to start with some fairly conservative plug-in settings.

Conservative starting points are always a good plan for mastering. For example, for the compressor, I've opted for a gentle 2:1 ratio, a 20ms attack time (to avoid totally squashing the transients), and a 500ms release (faster/slower times can suit higher/lower tempos respectively). Then, it's simply a matter of adjusting the threshold for the desired amount of compression, up to a maximum of about 2-3 dB. You can push some styles of music a little harder, but if you're doing that, then listen particularly carefully for side-effects.

I used DaTube (which comes with all versions of Cubase) for some subtle saturation/distortion, but you could use any similar plug-in (eg. Magneto II, which comes with Artist and Pro) or choose to bypass this stage altogether, depending on the sound you're aiming for. The Stereo Enhancer plug-in allows you to adjust the stereo spread of each band. This is an area where you might use different settings on different bands: keep the Low band where it is, or even try narrowing it; and try opening out the High and High‑Mid bands a little, but do check for mono compatibility when doing so. (Remember, the width of any band can also be manipulated using the relevant channel's pan pot.)

Finally, the Limiter plug-in provides a safety net, just to catch any stray peaks. I simply chose a suitably subtle preset and tweaked the output level to -0.5dBFS, to ensure I've a tiny bit of headroom before clipping might occur. You can, of course, push the input level control if you want to drive things a bit harder. The Limiter on the main Stereo Output channel is set up similarly.

With these initial filter and plug-in settings in place, it's then simply a matter of adjusting the channel faders to taste. As discussed above, the two purple faders allow you to choose to output just the 'mastered' audio or a blend of the original mix and the processed versions . There are no hard and fast rules that will always work; you just have to trust your ears and your speakers, but if using a blend make sure that the combined signal doesn't overload the Stereo Out or drive its limiter too hard.

If you want to adjust the broad EQ balance of the mix, you can obviously use some EQ on the Stereo Out, but the green channel faders also allow you some scope. Care is needed, though — if you need to do more than nudge the balance of these faders, that suggests that the overall tonality of the original mix needs revisiting.

I'll leave you with a final few comments, including a warning or two. First, if you're using Artist or Pro, the same setup could be created using FX tracks instead of the Groups, though I don't see any advantage in using FX tracks (in large mix projects, they can be shown/hidden en masse, and be assigned different-coloured fader caps, which can be a useful navigation aid). For some reason, in Elements you may only route FX channels to the main Stereo Out; that limitation doesn't apply to Group tracks, hence my use of the latter here.

Second, you don't have to use four frequency bands. Single-band, two-band (a low band versus the rest) or three-band (low, mid, high) setups are perfectly viable. Indeed, when taking your first DIY mastering steps, some of these might make for an easier starting point.

Third, in Elements and Artist the metering options are a little limited, so keep a close eye on the Stereo Out meter to ensure you're not making things too hot. The amount of gain reduction in the Stereo Out track's Limiter plug-in is a useful indicator. (Pro is better equipped in terms of master-bus metering.)

Fourth, with any multiband processing, there's the potential for problems where the bands overlap. I've used the MixConsole's Pre rack filters here, but you could use any EQ to create the frequency band splits, and experiment with linear- or minimum-phase filters. Whatever you use, compare the (blue) original mix and the (purple) mastered mix (but with all inserts bypassed) to check how transparent the filtering and processing is.

Finally, note that while this multiband project template constitutes a useful mastering a tool, it can't help you with the technical or creative judgements required to get that mastering process 'right'! For that, you need experience — get more mastering under your belt, and listen to good commercial tracks. Education helps too, though, so do check the free-to-access archive of articles on the SOS website to learn more about mastering.