Inside Track: Greta Van Fleet 'When The Curtain Falls' 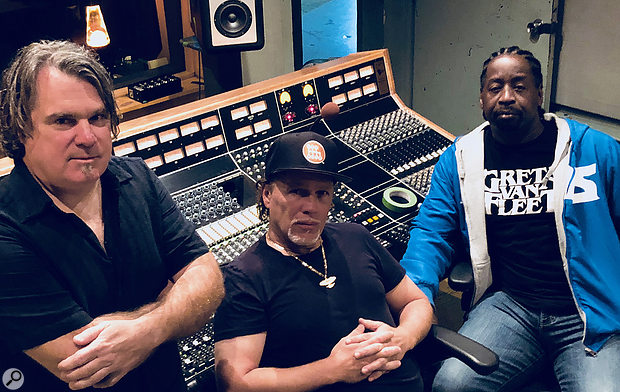 The success of Greta Van Fleet reflects not only the enduring appeal of heavy rock but the timeless virtues of classic recording techniques!

At a time when rock & roll has been in the doldrums for many years, the success of Greta Van Fleet is all the more more striking because they make no effort to reference hip-hop/R&B in order to appear up-to-date. The young Detroit four-piece sound like they have come out of a time‑warp from the early '70s; specifically, they sound very much like Led Zeppelin, with singer Josh Kiszka's wailing and shrieking uncannily reminiscent of Robert Plant, his brother Jake's guitar playing having a lot in common with Jimmy Page's, and third brother Sam playing bass, bass pedals and keyboards, just like John Paul Jones. There are, in fact, other influences in the band's sound — witness the Sam Cooke and Fairport Convention covers on their second EP, From The Fires — but still, it's striking that a quartet of 21st Century youngsters would want to sound eerily similar to a band that had their heyday 45 years earlier. What is for sure is that the Led Zeppelin angle provided a talking point that helped pave their way to the top, and their debut album Anthem Of The Peaceful Army peaked at number three on the Billboard chart. 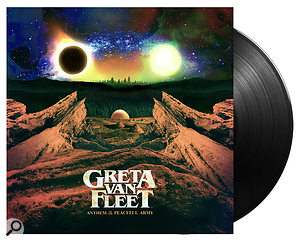 Just about the only aspect of the band's route to the top that followed standard procedure was that they were signed in 2016 by a big label, Lava Records (part of Universal). After the band refused all pressure to 'update' their sound, one would forgive the label for at least getting some well-known rock producers involved. Instead, Anthem Of The Peaceful Army was co-produced by a trio who refer to themselves collectively as the Rust Brothers: Al Sutton, Marlon Young and Herschel Boone. Sutton and Young both have mixing credits, and Sutton tracked the album.

Sutton is originally from Detroit and studied electronic engineering there and was into hi-fi, until he discovered that it wasn't the gear but the person operating the gear that made things sound great. He played in some bands, and co-owned a studio in Detroit called White Room. When the other co-owners went off to start Vintage King Audio, Sutton founded Rustbelt Studios in 1995. Young also is from Detroit, and his big break came playing guitar and co-writing several tracks on one of Kid Rock's biggest albums, Rock n Roll Jesus (2007). Boone, meanwhile, has a strong connection with Detroit's most famous music company, as his father wrote songs for Motown, and Herschel has sung with the likes of Mary J Blige, R Kelly and Kid Rock.

Sutton explains: "Our connection started with Kid Rock in 2007. I was engineering and mixing on Rock n Roll Jesus, and brought in Marlon to play guitar, and Kid loved what he did, and they ended up working closely together. Marlon then suggested Herschel for backing vocals, and he ended up also vocal coaching Kid, and that worked great. I'd never heard Kid sing like that. Since then we've worked together as a production trio, not just being a team for hire, but also looking for young talent to develop."

Enter Greta Van Fleet, who hail from Frankenmuth, a small town 100km north of Detroit known for its Bavarian architecture (really!). "In the Spring of 2015 we got a call from the band's manager at the time, who asked whether I'd be willing to record them," Sutton recalls. "When they came in, I was just blown away! I called Marlon and told him, 'You have to hear these kids, they're still only teenagers and already sound great!' So the two of us worked on the band's first EP, Black Smoke, and we played this to some of the people who we knew in the music industry."

Young adds: "There immediately were people who said, 'What you do is a little Led Zeppelin, perhaps you need to change that.' But the band said, 'We are not here to play some music industry game, we're not changing anything.' My attorney believed in them, and ended up playing their music to Jason Flom, of Lava Records, who signed them. But they would have been signed regardless. We just were the lucky ones who got to work with them first! They then approached us to record a few more tracks here at Rustbelt, which included the Sam Cooke and Fairport Convention covers. For these sessions we also got Herschel [Boone] involved as vocal producer, because he is like a vocalist whisperer. He can get any singer to sing things they didn't think they were capable of."

"When I worked with Josh on his vocals, it was always about getting a good vocal," insists Boone. "The Robert Plant comparison was never mentioned or discussed, and I don't know if it crossed Josh's mind. I get the comparison, because I can hear the influence, but if you get past that there's something really unique about Josh as a singer. And that is what I focussed on."

All tracks Greta Van Fleet had finished at Rustbelt Studios were included on the From The Fires EP, released in November 2017, which topped the US hard rock charts and reached 36 on the general Billboard charts. To record the subsequent album, however, band and producers decamped to Blackbird Studios in Nashville. "We went there for several reasons," explains Sutton, "partly because their management is based in Nashville, and they wanted to do some interviews in Nashville as well. Also, getting away from Detroit was not a bad idea, as being so close to home provides tons of distractions."

Greta Van Fleet at Blackbird Studios, where Anthem Of A Peaceful Army was tracked.Young: "We all have the same issues when we're in Detroit, with my son needing me, or someone's girlfriend or wife wanting attention. By contrast, we were in Nashville for one purpose only: to make a good record! We started with 10 days of sessions, then came back for another seven days, and then another three or four to finish vocals and some minor changes. The band then went on the road, and we all sat with the roughs for a while, and finally we did some more vocals and touched up some stuff up at Rustbelt, after which Al mixed the album here."

The company set up for the recordings in Blackbird Studio D, which sports a 96-channel API Legacy console, apparently the largest ever built, and seven recording spaces and three amp lockers. Rustbelt Studios also has an API Legacy, so one assumes Sutton must have an affection for them. "Mine is a split console," he says, "serial number 3, from 1993. And yes, I am an API guy. I like them better than Neve consoles! We had a mic pre shoot-out on the first day at Blackbird when we were getting tones, and I ended up using the API to record nearly everything. It has a punchiness and immediateness that's great, especially on the drums.

"We set up at Blackbird with the drums in the centre of the main room. Sam and Jake were in the same space, but their amps were isolated. Sam also had a full keyboard rig set up, with a piano, B3, Wurlitzer and Fender Rhodes, and so on, which mostly were overdubbed. But he played the B3 and bass pedals live during the tracking of 'Age Of Man'. There's no bass guitar in that song. Josh was in an iso booth with a Neumann U67. We recorded the acoustic in the same booth. They played a lot of acoustic guitar! They have a lot of folk influences. It's not just blues and rock & roll."

Young: "The band always laid the backing tracks down live in the studio. With most songs they were adamant that they didn't want to play to a click. They wanted to play the songs as natural as possible. The overdubs that they did are obvious things, like additional guitar parts or keyboards and so on, but for the rest most of what you hear is the band playing live in the studio. Josh would lay down a scratch vocal when the band was playing, but not blow his voice out; if he didn't get something great in the first couple of takes, we would just let that vocal recording play quietly for the band, so they could feel the emotion of it."