Page 3: Inside Track: Greta Van Fleet 'When The Curtain Falls'

'When The Curtain Falls' 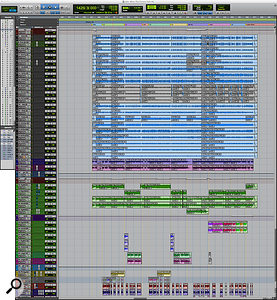 This composite Screen capture shows the entire Pro Tools session for the mix of 'When The Curtain Falls'. You will find a hi-res ZIP file of this screenshot in the righthand sidebar.Al Sutton illustrates his mix approach for the first single from Anthem Of The Peaceful Army, 'When The Curtain Falls'. The Pro Tools session contains just over 50 tracks, with the first six being mix print tracks. The session is neatly organised with, from top, a drums aux followed by 20 drum audio tracks in light blue, two bass tracks in dark blue and purple, 17 electric guitar tracks (which include four aux tracks and 11 audio tracks) in green, and five lead vocal tracks. Most tracks show evidence of editing, and all are topped and tailed, with silences removed from the lead vocal tracks. True to Sutton's word, the only plug-ins on the drums are a trigger on a kick and a trigger on a snare track, and there are just only a handful of plug-ins on the guitar and bass tracks. Only the vocal tracks have a noteworthy amount of plug-ins on the inserts.

"The numbers on the track outputs relate to the channels on the desk, where these tracks come up," explains Sutton. "Track 7 is a drum VCA track, which allows me to ride the entire kit. If I need a crescendo leading up into the chorus, I can ride that on the VCA. Yes, there are triggers on kick and snare tracks, because I added a couple of samples, just for some more low end on the kick, and a bit of fatness on the snare. I used to send the toms through a BBE 442 to give them more attack, but that piece of kit recently died, so on some tracks, like 'Lover Leaver', I instead tried the SPL Transient Designer plug-in to do the same thing. As for outboard, I'll do a mono 'back bus' parallel compression on the kick and snare, in this case using my outboard Acme Audio Opticom XLA-3. For the rest I used desk EQ and compression, and the room mics at Blackbird. 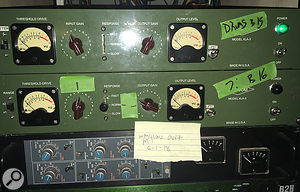 A fan of parallel compression, Al Sutton employed his Acme Audio Opticom compressors on the kick and snare bus."I also had the Opticom in the bass for parallel compression. In this case I'll run that really dirty and blend it back in. I did this with one of the guitar tracks as well, the 'Guitar SC' track, but in this case I used the plug-in version of the Opticom. I'll really drive the plug-in and mix the result in underneath for some harmonic enhancement. I added some reverb on some of the guitars with the Avid ReVibe and added some additional effect with the SoundToys Crystallizer, but that was it. I didn't use outboard on the guitars, it was just straight into the board and then to the mix bus."

"The main lead vocal, track 48, has the Opticom for some compression, and I'll always have a parallel lead vocal channel next to it, called 'smash', again for parallel compression, and it'll have tons of plug-ins and I'll just crush it to pieces, almost to the point of distortion, and tuck that underneath the main vocal. The plug-ins on the 'smash' channel include the Waves SSL Channel, Waves CLA-76, Waves DeEsser, Waves H-Delay, and the Soundtoys PhaseMistress. The latter is to get the choruses to sound wider, and the track has some automated delays. For vocal reverb I use the Echoplate 2 [plate reverb] with a Delta Labs Effectron II for pre-delay, and depending on the song either a Lexicon Primetime II or Fulltone Echoplex for slap-back delay.

"Finally there are the backing vocals, on which I had again the Waves SSL-Channel, CLA-76 and DeEsser, and then the Waves SuperTap delay, for stereo delays in the choruses, also to get them to sound wider. I do the vocal blend in Pro Tools and, depending on the parts, will send the blends out on one of the two stereo outs. In this case I had two sets of stereo outs to the API and I compressed each pair lightly with the Inward Connections TSL3 and TSL1." 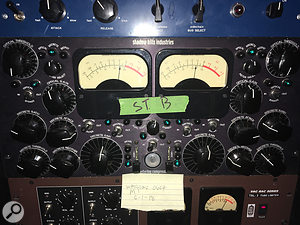 The stereo mix bus also enjoyed parallel compression, this time using the Shadow Hills Mastering Compressor.To glue everything together, Al Sutton once again employs parallel compression. "The API Legacy has an A bus and a B bus, and I'll put a Shadow Hills compressor on the B bus. I'll blend that back in with the A bus, and I'll print that back on as a stereo track in the session. I'll print a brickwalled track as well so we can hear the mix really loud, and get some idea of where we'll end up. But I'll send my mix uncompressed to mastering, which for this album was done by Ryan Smith at Sterling Sound. I leave loudness up to the mastering engineer, because I don't want to play that game any more. It just ruins your mixes. If you can get at a competitive volume without having all the dynamics smacked out of your mixes, I think it will resonate more with people."

The production as a whole was relatively fast by today's standards, and unusual in being based around live performances tracked without a click. To Marlon Young, this is the very reason why Greta Van Fleet have become stars in a US music scene that is generally hostile to hard rock. "Part of the excitement is, of course, that it's been a while since a rock band had a top-selling album. They're creating a buzz that has not been around a rock band for quite a while. I think people don't connect with artists like they used to, and I think it's because today's pop music lacks some of the human element that makes you feel you personally know the guitar player or singer. The production of a lot of modern pop music is incredible, but rock & roll has some grease and edginess and imperfection that makes it easier to identify with the artists, and that I believe gets people to follow them for a lifetime."

Following the success of the From The Fires EP, expectations around Greta Van Fleet's debut album were extremely high. The quartet sought to cope with the pressure by spending two weeks writing songs in a cabin deep in the Tennessee woods. Reportedly, the cabin was haunted, with unidentified footsteps and children's laughter sounding only when, naturally, band members found themselves alone. Undaunted by the experience, the band subsequently turned up at Al Sutton's Rustbelt Studios for pre-production with the Rust Brothers.

Marlon Young: "When they came here they had tons of ideas, I think for 41 songs or something, and we just threw up a couple of microphones to quickly record them. This is where we started getting the focus for the record. We whittled down the songs to the ones we all agreed should be on the album, and during the pre-production process they came up with a new song, 'Brave New World'. They also came up with a new riff for 'When The Curtain Falls', which used to have a different riff. In the end we settled on 12 songs, with one song not making it, but that instead will be used for a movie. I think the band wanted the album to be a continuation of their two EPs, and the songs that didn't make it to the album were not scrapped, but were simply not right for this record. I'm sure they eventually will see the light of day.

"During pre-production we of course talked about things like tempos, arrangements and song structures, like whether the chorus should come back after the bridge — the things that you are supposed to discuss with your producers. But the songs were fully written, and they already had the arrangements pretty close. Sammy is always thinking about his parts, and by the time it comes to recording, he has really worked things out. Jake is more of an on-the-spot guy. He'll have ideas, but these can change any the moment. Overall, our arrangement suggestions were minimal."