Page 2: Inside Track: Greta Van Fleet 'When The Curtain Falls'

Fix It In The Tracking

Anthem Of The Peaceful Army perhaps has more bass and high end than would have been common 40 years ago, but overall the sound is very natural. Asked whether he tried to make Greta Van Fleet sound '70s or more up-to-date, Sutton laughs. "It's funny, I'm 51 years old, and I've been recording music all my life, and it's like: after all this time, I finally found a band that fits my style of engineering! Nowadays, people always want you to do something weird and different, but to me, less is more. I spent 30 years learning how to engineer, and especially for loud, loose, rock & roll things, I like recording setups that are clear and phase-cancellation free, and that don't give me tons of tracks to worry about.

"In general I try to just record things the way they sound in the room, and not to add tons of EQ. If you have to EQ a guitar tone while you are tracking it, something is messed up! I certainly don't add tons of high end on anything. Also, during recording, Pro Tools is just a tape recorder for me, but I also try to restrict the way I use it during mixing. The problem with Pro Tools is that it gives you too much control. In popular music today, producing is a producer's game, it's not about bands. People hire producers to create tracks for them, and while these producers get really cool sounds, I don't see myself listening to these songs in six months, because they don't resonate with me. I find myself gravitating back to '70s music because it's a little imperfect and feels better." 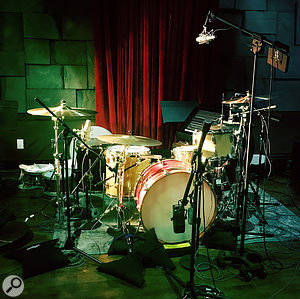 The core of the drum sound came from a pair of Neumann U67 valve mics in 'Glyn Johns' formation: one above the snare and the other near the floor tom.Young agrees that it's all about getting the sounds right at source. "I'm old fashioned. If I don't like a guitar sound, I don't blame the mic or the mic pre, I want to go and find a different amp setting, or a different amp or a different guitar. If I don't dig the snare sound, it usually means we need a different snare. When you're at the level where you're using an API or a Neve or gear like an 1176, if the tone is bad, it's the source. As for the bass, on most of the records that I like, the bass guitar is louder than the kick. You feel the groove from the kick, but if it's too loud, it takes away from the musicality of everything else. So I would sometimes say to Al, 'Turn the bass up and the kick down!'"

Of his drum-miking approach, Sutton says: "I take the Glyn Johns setup as my basis, with an overhead and a side mic equidistant from the snare — I use two drum sticks to measure the distance. I used to use two Mesanovic M2 ribbons for this, but now use two Neumann U67 mics. In addition, my kick mic is the AKG D36, and my snare mics are the Shure SM57 and Neumann Gefell M300, held together by an X clip. I have a mic pointing at the side of the snare which often is called the 'wurst mic' [a term coined by German engineer Moses Schneider for a saturated lo-fi drum mic that delivers a sausage-shaped waveform — Ed.]. I used to use the Neumann UM57 for that, but now it's the Sennheiser MD441. It's really pointy and effected-sounding, and technically you can use that mic for your entire drum sound. My room mics are two Mesonovic ribbons, in a Blumlein setup. All drum mics went through the API, straight into Pro Tools. 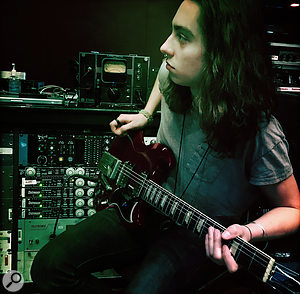 Jake Kiszka with the 1961 Gibson SG that was used for many of the electric guitar tracks on the album."I recorded the bass DI, and the bass cabinet with a Neumann FET 47 mic. I miked the B3 Leslie with a U87 at the top, and a Neumann FET 47 at the bottom, and I had used a DI for the small vintage guitar amp we used for the other keyboards. With regards to electric guitars, we usually had several amps set up, like an AC30 and a Marshall, or Marshall clone, and I tended to have a U67 on one and a U87 on the other cabinet, placed straight on the centre of the speaker. Sometimes I'd use a Sony C37 or a Shure SM57. All the guitar mics also went through the API desk, but I sent the bass through the Acme Audio MTP‑66 pre and DI." 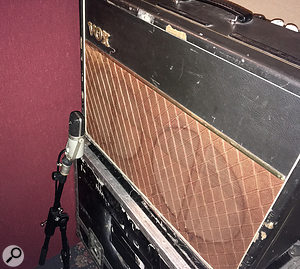 The songs were laid down as live performances, but with amps in isolation booths for separation. This AC30 — miked here with a Sony C37 — was a favourite in combination with Jake Kiszka's SG.Young adds: "Jake has a '61 Gibson SG with two of the finest pickups I have ever heard. Going through an AC30, that results in a very pure guitar tone. You have to be a horrible engineer to make that sound bad! Jake doesn't like distortion. He doesn't use pedals, and sets the amp right at the edge of biting a little bit. So that results in a nice tone."

Sutton: "With acoustics, it's once again all about the source. Blackbird has a large selection of great acoustic guitars, and if your acoustic sounds good, the recording of it will sound good. I tend to do the simplest thing, which is to place a large diaphragm mic on the sound hole, for the thickness of the sound, and a small diaphragm higher up the neck, for the brightness, and blend these two. I try different things, sometimes putting the small diaphragm at the 12th fret and angling it, but I keep coming back to the basic setup. 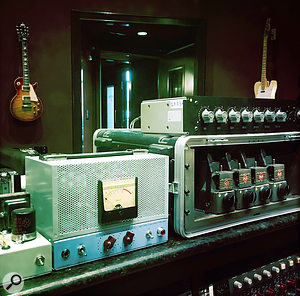 The Motown Tube Direct Preamp box is based on a design by original Motown engineer Mike McLean."As I mentioned earlier, I recorded lead vocals with the U67, but did not send that through the API. Like for the bass I instead used the Acme Audio MTP‑66 pre, and then a Neve 33609 for some compression and an Original Motown EQ if EQ was needed. MTP stands for Motown Tube Direct Preamp, and the Acme is a unit that I built, and sell. Motown used to have a small, five-channel input box, called the Motown Five Channel Guitar Direct Amplifier, that's coveted by tons of people, and the Acme is a single-channel version of that, with a mic pre added. I got all the schematics from Mike McLean, who was the chief maintenance engineer at Motown during the 1960s, and who did a great job in designing it. You can hear it on all Motown stuff, particularly guitars and bass from 1966 on. The Acme MTP‑66 is all-tube, and the preamp sounds really open, with a classic fixed-gain design on the mic pre and DI."

Al Sutton was doing rough mixes during tracking at Blackbird, and these were what everyone lived with until it came to the final mixes at Rustbelt, where Sutton's 48:24:4 API Legacy desk has a split configuration, with 16 212 preamps, and Uptown 2000 automation. "The rough mixes were pretty close," he recalled. "We had some time between tracking and mixing, so we could all listen to the roughs and go over stuff in our minds. We did some vocal comping with Herschel before the mix, but there was no more musical production to be done at that point, so for the rest it was about level rides and effects. I do the vocal rides and any guitar automation stuff on the desk, but for the drums I will use Pro Tools. I also do all muting in Pro Tools.

"There definitely is a use for Pro Tools as an automation unit when you're mixing. I do parallel compression on some tracks in Pro Tools, but for the rest I spread all the mixes out on the console, and all outboard effect returns come back on the board as well. I try to use outboard when I mix, for the most part, and have the same setup for every mix. It's something I learned from watching Chris Lord-Alge mixing once: consistency. As a result I have the same compressors and other outboard on certain things every time. You work faster and more efficiently. However, because other people also sometimes work in Rustbelt, I use patchbays, so it's possible to change everything.

"My mix process is that I will listen to each individual track first, and make each track sound OK, and then I'll bring tracks in one by one, always listening to the vocal in the background, so I can hear things in context. I build the mix around the vocal. When I feel I have a result, I'll send my mix to Marlon, who listens to it, presumably on a golf course [laughs], and he'll come back to me with feedback. Only once we felt we really got a mix would we send it to the band, get feedback, and make changes."