Screen 1: SilverVerb might be one of the older reverbs in Logic Pro X, but it is light on CPU.

Logic's Legacy plug-ins offer some great music-making tools — you just need to know where to look...

Geoff Smith is taking a well-deserved break from Logic Notes, so I'm stepping in with a few tips of my own. Geoff has done a fantastic job in covering the new Logic features as they emerge, but this month I'm going to focus on some of Logic's Legacy content that tends to get overlooked in the light of newer and shinier alternatives.

Logic has some great reverbs built in, from the super-realistic Space Designer to the recent algorithmic Chromaverb, accompanied by its display of coloured candy-floss fountains — though not on my old Mac Pro as the graphics card isn't candy-floss compatible, which means I still get the reverb but no fancy display. However, I'm not here to tell you what you already know but to look at some of the older offerings, including the humble SilverVerb. In fact I'm surprised SilverVerb hasn't been relegated into the Legacy folder along with PlatinumVerb and its friends. SilverVerb was one of Logic's original low‑CPU‑overhead algorithmic reverbs, even further down the food chain than PlatinumVerb, and I get the feeling that most users consider it as a second-class plug-in and don't give it a second thought. Don't dismiss it, though, as while it can sound a bit challenged on drums and percussion, it can do absolutely magical things when used on piano, guitar and wind instruments.

We're all familiar with the hardware equivalent of this story — a new more realistic echo, reverb or whatever comes along, but then we start to rediscover the joys of the old ones when it turns out that their shortcomings added to their musicality. This is certainly true of reverb, where the somewhat coarse character of those early units really works with certain sound sources. SilverVerb certainly falls into that camp. It is so coarse that at some settings it sounds more like a delay, but that's exactly what makes it such a dreamy sounding reverb. Furthermore it includes modulation plus high/low filtering so you can create some very fluid reverbs that sit perfectly in a mix.

With only a handful of controls, SilverVerb is pretty easy to use, though not all the controls correspond to what you'd normally expect to find on a reverb plug-in. For example, there's no single decay time control. Instead, to the right of a conventional pre-delay control you have a control for Reflectivity, one for Size and one labelled Density/Time. All have some effect on the length and character of the reverb tail. As its name suggests, Reflectivity changes the amount of sound energy bounced back from the virtual walls, while Size changes the volume of the virtual space. Density/Time does influence the decay time but at the same time it changes the density of the virtual reflections, to the extent that at lower settings the plug-in sounds more like a delay.

The modulation section is fairly straightforward, with LFO rate and intensity controls, but a nice touch is the Phase control that lets you offset the phase of the modulation between the left and right channels when you're using SilverVerb in stereo-out mode. Set Reflectivity to zero and Density Time to zero and you'll hear just a single repeat, the time of which is set using the Size control. This goes from a 20ms slap up to a 200ms delay. Increase Reflectivity and you get a repeating echo, as you would when turning up the feedback with a simple digital delay. However, as you move the Density/Time knob clockwise, you'll hear the simple delay morph into a more recognisable reverb. By juggling the Reflectivity and Density/Time controls while using Size to set the fundamental delay time, you can conjure up anything from a short room ambience or slap-back echo to a dense, rolling reverb that goes on for maybe half a minute or more. Use the filters to stop the low end of the reverb from becoming too washy and there are some truly lovely reverb effects to be had. Try adjusting these settings while playing a basic dry piano sound to see what I mean. Or try my settings from Screen 1 above.

The real source of 'forgotten' stuff is the Legacy menu, and for the life of me I can't figure out why Apple didn't just leave the word Legacy in the plug-in list. Instead you have to know to hold down the Option (Alt) key before clicking in the plug-in box, then the word Legacy appears and only then do you get to see what's inside. In the Legacy effects section this reveals PlatinumVerb, it's pared‑down brother GoldVerb and the super‑simple AVerb. Other items tucked away under Legacy can be seen in Screen 2. Most are worth trying, other than the somewhat unsuccessful Denoiser. 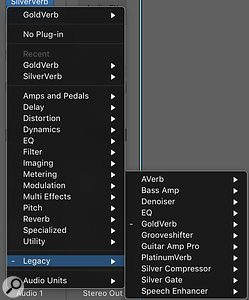 Screen 2: Hold Alt when loading a new insert effect to reveal the Legacy items.AVerb is a bit like SilverVerb but without the modulation or filtering, and though it can sound useful when combined with EQ and modulation plug-ins, such as Ensemble, it is probably best left to rest in peace in the Legacy section, as SilverVerb is so light on CPU overhead anyway. The same might be said of GoldVerb, as its bigger brother PlatinumVerb is more useful and doesn't demand much more in the way of CPU overhead, but there is one trick you might want to try with GoldVerb: not to use it as a reverb but rather as a means of changing the timbre of a sound. Set the ER/Reverb Balance slider fully left for early reflections only, set density, pre‑delay and reverb time to minimum, set Mix at or near maximum, then use the room size fader as a timbre control. This works because of phase cancellation causing filtering within the ER generation section, and can produce interesting variations on tuned percussion or piano sounds.

Do the same 'holding down Alt' thing when instantiating a software instrument and you'll find another list of instruments under the Legacy header. One that I've made good use of on several occasions is Digital Stepper, as there's no direct counterpart in Logic's main instrument armoury. Despite its lack of a fancy interface and its small number of controls, Digital Stepper makes it easy to create 'altered' organ sounds, FM-like pads and — thanks to its stepper section — it can also incorporate rhythmic timbral change via a cutoff filter and the introduction of harmonic steps. A Balance control morphs between a very digital-sounding additive harmonic type of synthesis and a smoother, more analogue-like character. This particular instrument is so easy to use that you don't even get any factory presets — there are only nine horizontal faders needed to set up a sound (see Screen 3). 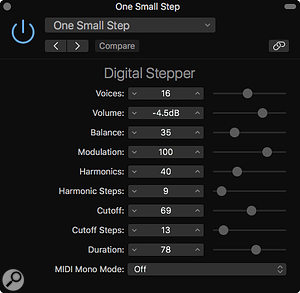 Screen 3: Digital Stepper may have been relegated to the Legacy folder but it offers some good organ sounds, FM-like pads and rhythmic timbral changes.Fun though Digital Stepper is, it's not the only game in Legacy town. Hybrid Basic is another stripped‑down, faders-only synth that creates Pad sounds based on preset waveforms modified by basic filter and level envelope controls. Despite it simplicity, it is capable of producing some very usable, instant gratification sounds that are easy to tweak, from sampled strings to trance chords to Korg M1-type pads. Hybrid Morph looks similar but uses a different waveform set plus some sound morphing capabilities to generate evolving digital pad sounds. Its handful of faders include a multi-mode resonant filter.

While none of the above instruments are super-sophisticated, they do provide a very quick way of coming up with easily-tweakable sounds that fit into a number of genres. In fact you might also be tempted to check out the tonewheel organ instrument. This doesn't have the lovely graphics of the one in Logic's main instrument section and you don't have any drawbars as such — but what you do get is a single slider that sweeps through a huge number of drawbar combinations so you can choose a sound that works entirely by ear without ever having to know how to build up sounds using drawbars.

DAWs Of Future Past

Each update to a major DAW such as Logic brings with it new features that some users will find indispensable and that others may not have such a strong need for; I'm hoping to find time to explore the latest additions to see if any will benefit the way I work. Fun though new stuff is, it is always worth taking the occasional backward glance to see if there's anything hidden away that you can make use of. After all, something old you didn't already know about is effectively something new. Since I discovered how useful SilverVerb can be, for example, I've used it on pretty much all of my ambient compositions with Cydonia Collective, alongside Logic's more up-to-date effects and instruments. It takes up so little processing power that you don't have to feel guilty about deploying multiple instances with different settings on multiple tracks, rather than settling on one setting to access via an aux send. As with life itself, don't just assume that just because something is old and not pretty, it can't be worth anything.