Steinberg have made available the results from a set of uniform Cubase SX tests that pitted different computers against each other — but what does it all mean for your choice of processor?

This month, much of PC Notes is processor-related, as both AMD and Intel have new models on offer. Steinberg have also released some very interesting processor-related test results, and that's what I'm going to be discussing first in this instalment.

The November 2003 issue of SOS featured a PC Musician article I wrote about devising music PC test routines. The article was based on research I'd done in August and September, and I was pleased to note that on November 18th 2003, Steinberg published a set of performance figures along similar lines to the article. The tests cover a selection of eight PC notebooks and desktops, with both AMD and Intel processors. Steinberg also include an Apple Mac G5 in the results tables, although admitting that at the time of testing neither Cubase SX or the plug-ins used had been optimised for G5 processors.

The software test platform is the latest version (2.0) of Cubase SX, using standard settings for such expert Cubase parameters as Audio Priority and Preload. To further standardise the testing procedure, all systems have Nuendo (rebadged RME) soundcards fitted, using the latest drivers. Steinberg have used Luigi Moar's FiveTowers (www.fivetowers.moar.net) test song, which runs a selection of VST plug-ins and instruments, but have decided to stick with version 1.0 of the test rather than adopt the later version 2.0. (As I mentioned in my feature, the latter contains so many plug-ins and instruments that some PCs can't run it at all.) Because of this, their results are in line with those of Timo's Cubase SX web site, which continues to champion version 1.0 of the test, and now offers a huge selection of user-supplied results.

On his web site, Timo suggests using the FiveTowers test to first measure the lowest latency possible without any clicks and pops. In this state, values should be posted for the Cubase CPU meter when the test song is first in 'stop' mode (only plug-in effects running), and then in 'play' mode (when the VST Instruments also take their share of overhead). Steinberg have taken this exact approach for their tests.

A second pair of results is also recommended by Timo, using a significantly higher latency value. Steinberg have adopted 23ms as a standard value for the latter. This ties in well with results I obtained for an article in June 2003's SOS, where I measured an increase in overall CPU overhead due to the higher frequency of interrupts once you drop below about 12ms latency. By adopting the next value in the chain of soundcard buffer sizes (ASIO drivers normally offer buffer sizes that provide latencies at 44.1kHz of 2.9ms, 5.8ms, 11.6ms, 23.2ms, and so on), you ensure that the figure you measure reflects the PC's performance with plug-ins and soft synths, and excludes extra soundcard-related interrupt overhead.

In the March 2002 issue of SOS I presented a set of tweaks to suit the musicians who were starting to use the then-new Windows XP. These tweaks included disabling ACPI (Advanced Configuration and Power Interface) mode, to cure some soundcard problems, disabling graphic frills and various background activities, and selectively disabling some Services (specialised routines that perform specific tasks). 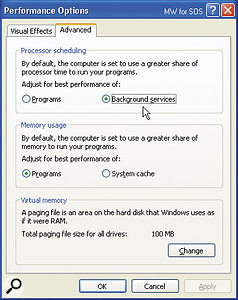 Despite the plethora of tweaks documented on various web sites, this is probably the only essential change for musicians to make when running Windows XP.One year later, in February 2003, I revisited Windows XP for the benefit of those musicians who were still hanging on to Windows 98SE, to explain the various performance advantages of the newer operating system as far as music-making was concerned. At the time I also updated my thoughts on XP tweaks, concluding that while a few were still important, most were largely becoming optional.

I'm now writing for the February 2004 issue, and while I've installed various new Windows XP partitions on both my desktop and new laptop PCs over the last year, I'm not bothering to indulge in a lot of tweaks, simply because many of them have proved to make a vanishingly small improvement to overall performance. If you're using ASIO drivers with your soundcard, however, one 'must-do' tweak is still to change Processor Scheduling to 'Background Services' rather than 'Programs', in the Advanced page of the System applet of Control Panel. The Power Saving scheme should be set to 'Home/Office Desk', particularly on laptops, to disable any CPU-quenching technologies designed to save battery life, and intermittent tasks such as system restore and screensavers should still be disabled, as should System Sounds, to avoid audio interruptions.

Apart from the above, you can normally leave well alone, particularly in the case of ACPI and Services, although I also disable most graphic frills, since I find XP sluggish with them left on.

Most of us were so used to having to drastically change the operation of Windows 98 and 2000 for reliable operation of music applications that we expected to have to do the same with Windows XP. Nowadays, the truth is that even a PC bought mail order or from a high-street shop can probably be run fairly successfully with music applications without modification. And that's most definitely a change for the better in my book.

The Results Are In

Given the various anomalous readings posted by users on both Timo's web site and the FiveTowers site, for me the most important thing about the Steinberg test results is that they have all been measured carefully using the same procedure. This makes comparing the various Steinberg results obtained from different system configurations a more reliable exercise. The results also make very interesting reading.

All but two of the systems tested (both 'Mobile Pentium 4' notebooks) manage the lowest (3ms) latency setting with no clicks and pops. Moving on to the higher 23ms setting, at the lower end of the ranking three PCs offer almost identical CPU results in the 'stopped' condition: a Sony VAIO notebook with 2.5GHz Mobile Pentium 4 processor; another VAIO notebook, this time with a 1.5GHz Pentium M processor; and a desktop PC with a 2.4GHz Pentium 4 HT (HyperThreading) processor running at 800MHz FSB (Front Side Buss). This proves once again that the latest Centrino laptops, using the Pentium M processor, are extremely capable, despite their apparently low clock speeds. (For more on the different types of laptop processor, including the Pentium M and the Mobile Pentium 4, see my PC Musician article in the October 2003 SOS.)

As we move upwards in the performance stakes, there's another clutch of three machines with identical plug-in results, still in the 'stopped' condition, this time an Athlon XP 2400+ with 2GHz clock speed, an Apple Mac G5 Power PC 970 with dual 2.0GHz processors, and a Dell Precision Workstation with dual 2.2GHz Xeon processors. This is a wonderful result for the Athlon, considering the relative prices of the other two systems, but of the three the Athlon does have the highest overhead once the VST Instruments start running, by some 20 percent compared with the other two. However, it's interesting to note that the Athlon beats the equivalently numbered P4 2.4GHz, by some 14 percent with plug-ins and 19 percent with VST instruments added. The dual 2.2GHz Xeon and dual 2.0GHz G5 are reasonably on a par for the moment, until Steinberg add G5 optimisation to their code.

The top two machines in Steinberg's overall ranking (derived from a mean of the stopped and playing conditions) are both PCs. They provide almost identical results at 23ms latency, and are running an Intel 3.2GHz Pentium 4 HT and AMD Athlon XP 3200+ 2.2GHz processor respectively. However, if you only look at 'playing' tests with VST instruments, the Intel P4 3.2GHz does move slightly ahead of the Athlon XP. In playing mode, the dual Xeon edges ahead even of the 3.2GHz P4, but the current winner overall in 'running' mode is the G5 Mac, which manages to beat the best of the rest by about nine percent.

It's fair to point out that these results rely on bundled Steinberg plug-ins and VST instruments, with their particular optimisations, so the ranking of the tested systems may change considerably once a range of third-party plug-ins and soft synths is employed.

Athlon users may be surprised that their choice of processor doesn't completely trounce the Pentium 4 in Steinberg's table of results, as it has done in some other audio-related tests in the past. The reason in this case is that the Athlon's lead has been eroded by the HT optimisations included in Cubase SX version 2.0. These benefit the P4 considerably, but give no improvement to Athlon performance, although in its favour the Athlon XP 3200+ is still about £75 cheaper than Intel's P4 3.2GHz at the time of writing.

A second table, summarising two further tests, is also included in the Steinberg results. The first test involves running the shareware Ambience VST reverb plug-in, courtesy of Magnus Jonsson of www.smartelectronix.com, choosing its 'Mairo-Drum Booth' preset (CPU overhead varies considerably from one preset to another), and then, with 6ms latency selected, inserting as many as possible as SX audio insert effects, without any clicks being heard. 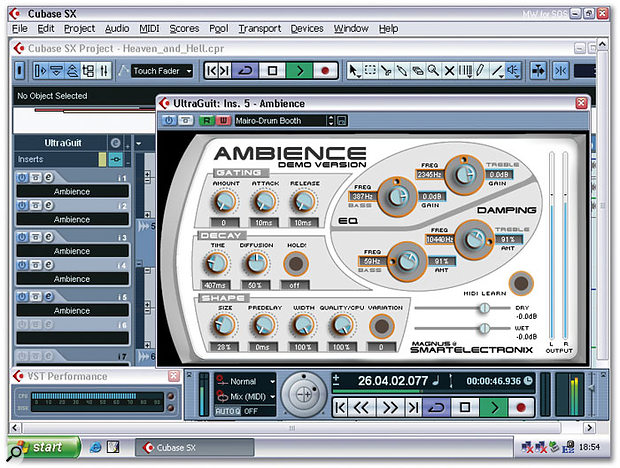 Steinberg have adopted the shareware Ambience reverb plug-in to provide Cubase with an equivalent to the Logic Platinum test. Here, just like many other Intel systems, including a P4C 3.2GHz model, my Pentium M 1.4GHz Centrino laptop manages just five instances, with an overall CPU reading of 75 percent.

Since Ambience is described as an 'ultimate' reverb comparable with commercial hardware effects, even the fastest performer in this test only manages nine instances, so it's fairly easy to set up the trial. Having been adopted by Steinberg, the Ambience test finally gives Cubase users an equivalent to the Logic Platinum reverb test from DNS studios.

However, one should bear in mind that this plug-in has been specifically optimised for the AMD range, and none of the Intel systems manage more than five instances. The Apple Mac G5 manages seven, the Athlon XP+ 2400+ does eight, and the Athlon XP+ 3200+ achieves nine. This proves what I've said on many occasions over the years: differently optimised software can turn CPU contests upside down! Indeed, one might say it's strange for Steinberg to adopt an AMD-optimised reverb plug-in for a standard test, since it skews results — but perhaps no other more suitable freeware plug-in could be found.

The final Steinberg test measures how many 16-bit/44.1kHz audio tracks can be managed simultaneously. Steinberg openly admit that this will vary hugely according to the installed hard drive, amount of RAM, buffer sizes, and so on; apparently, these results were largely included to show how standard notebook drives perform.