DP7 includes enticing new features ideal for guitarists. Here's a quick‑start guide to the best of them. 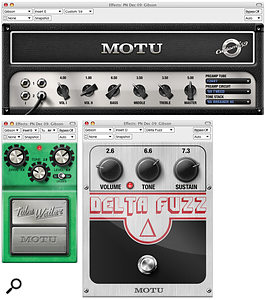 If you're a guitarist, DP7 will make you feel like all your Christmases have come at once!

Undoubtedly, DP7's most glitzy addition is a clutch of new audio plug‑ins. These include guitar‑pedal emulations, the Custom '59 guitar combo modeller, and Live Room G, which lets you achieve that 'miked through an amp' sound on any audio track. All have nice friendly graphical interfaces, and they're conceptually very straightforward. But what's maybe less obvious is how you can best make use of them (or any other guitar‑oriented plug‑ins) while tracking and mixing.

First, how do you use the amp and all those pedals during recording? Unlike many other effects types, guitar distortion/overdrive isn't usually something you add at mixdown to an audio track that was recorded 'clean'. Instead, you need to be able to monitor the guitar tone as you're jamming and recording to an audio track. Follow these steps to achieve that:

2. Disable any zero‑latency monitoring scheme you may have running on an external audio interface or hardware mixer.

3. Create a mono audio track and choose for its input the hardware input to which your guitar is connected. Then turn on input monitoring: this is the 'input' button in the Mixing Board, the blue icon in the 'Mon' column in the Tracks window, or a track's little loudspeaker button in the Sequence Editor.

4. Hopefully, you're now hearing your guitar. If not, check your monitoring signal chain, and ensure that you've assigned an appropriate output to the audio track. Also check Studio menu / Audio Patch Thru, and choose Auto or Blend, the two most useful modes for this sort of 'software monitoring'.

5. Now for the fun bit. On the audio track, instantiate your favourite stomp‑box emulations, or dial in some tones on the Custom '57 amp simulator. If latency is an issue, go to Setup menu / Configure Audio System / Configure Hardware Driver and reduce the Buffer Size: 128 or 256 should do the trick.

6. When you're ready, record‑enable your track and hit record.

What I'm describing here, of course, is straightforward 'through‑effects' monitoring, where your guitar signal passes into the computer, through DP's mixer and effects plug‑ins, and back out again. But interestingly, because of DP's signal flow, although you're monitoring the signal with effects, you're actually recording it without them. To check this out, try disabling the plug‑ins on the track you just recorded (by Alt‑clicking them in the Mixing Board). Lo and behold, you should hear a dry guitar signal. This means that you can continue to tweak your guitar tone after recording, should you want to — or perhaps duplicate the audio track (by selecting its name in the Tracks window, then choosing Duplicate Tracks from the Project menu) and dial in different amp and stomp‑box settings, to get a tight, multi‑layered effect.

First up is DP7's Wah Pedal plug‑in. You can't beat a good wah, and this one emulates a couple of classics. But what good is it if you can't operate it with your foot? Well, you can, assuming you've got some sort of MIDI‑enabled pedal. This could be a dedicated guitar MIDI pedalboard controller, or an expression pedal for a keyboard or synth. Either way, the pedal (or the synth it's connected to) will need to show up as an input in OS X's Audio MIDI Setup application so that DP knows about it. Assuming it does, the MIDI data comes into DP and gets routed to the plug‑in, which has special MIDI input capabilities. To get all this happening, the best approach is to take advantage of one of DP's most under‑used features, Consoles.

1. Load an instance of Wah Pedal on an audio track to which your guitar is routed, and which you're monitoring through software.

2. In the Project menu, choose Consoles / New Console. A blank window appears, along with a little palette.

3. From the palette, drag a knob or slider (doesn't matter which) into the blank console window, and drop. A Control Assignment dialogue box appears.

4. You can ignore most of the scary stuff! In the Source section, click the MIDI radio button, and in its pop‑up menu choose the name of the MIDI source that corresponds with your expression pedal. In my example it's attached to my Roland RD700SX synth.

5. In the Target section, choose MIDI again, and Wah Pedal in the associated pop‑up menu. Then un-tick 'Only follow source when selected' and tick 'Echo data from source to target'. These options ensure that the Console can work 'in the background''and that your pedal data‑stream passes through the Console without getting mucked about with by any other settings.

6. Directly underneath, click in the left‑hand 'Ctrl. #' field, then move your pedal. DP should 'hear' the MIDI message it generates and enter the appropriate CC number automatically. Do the same in the right‑hand Ctrl. # field. then click OK. 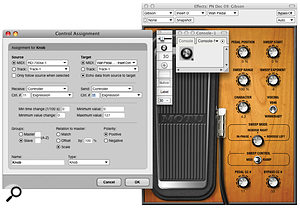 A Console is an ideal way of routing data from a MIDI expression pedal to the new Wah Pedal plug‑in.

7. Finally, in the Wah Pedal plug‑in, set the Pedal CC # parameter to the same number as in the fields in step 6.

It may not be all that pretty, but you've just made a little MIDI router, and now moving your pedal should result in Wah Pedal's virtual pedal moving too. Job done.

Next, we come to the new Live Room G plug‑in. This is a lovely thing, making any track it's used on sound as though it's coming out of a guitar amp, miked with a variety of appropriate mics at different positions, in a nice room. Essentially it's very simple, and the user interface is intuitive. But MOTU missed a trick in not offering a wet/dry balance control. This is of particular concern to bassists, who often like to blend a clean DI'd sound with that of the same signal miked up through an amp. If you place Live Room directly on a DI'd bass track, you end up with only the miked sound. But there are some ways around this.

The first is really easy, if you've already recorded a DI part: just duplicate the track (Control‑Command‑D), then instantiate Live Room G on the new track and blend to taste using channel faders in the Mixing Board.

The second method is a little more fiddly, but it's a solution if you want to hear the DI/mic blend live, as you record. You'll need to enable software monitoring, as I described earlier. Then:

1. Create an Aux track, with your bass as its input and an unused bus as its output.

2. Add two new mono audio tracks, and for each of their inputs choose the same bus as in step 1. Make sure they have suitable outputs, driving your studio monitors.

3. Record‑enable both audio tracks. You should hear your input signal, effectively doubled now that it's been split in two.

4. On one audio track, load the Live Room G plug‑in. On the other, call up compression or other processing for the DI signal.

You can now use Mixing Board track faders to achieve your desired DI/mic blend. When you record, the two tracks will capture the same dry signal, as explained earlier, but this means you keep your options open right to the end of the mix.

A very welcome new Digital Performer 7 feature is channel strips. The idea is that DP can now show you most of the Mixing Board channel settings for a track you're working on without you having to leave an editing window. The channel strip appears in the window's Information Bar.

To get channel strips appearing in all your editors' information bars, go to the Preferences window (Digital Performer menu) and click on Information Bar in the left‑hand list. Select every grey blob in the Mixer column. You'll see which editing windows each refers to by looking at the names down the left‑hand side. Now try switching back to the Tracks window, say. Look above the track list, and there's your channel strip (see the picture below for what it offers in terms of facilities).

The channel strip updates to show settings for whichever track you have selected, whether audio or MIDI. If you have multiple tracks selected, it shows whichever one was selected first.

DP Workshops On The Web

The Sound On Sound web site offers all the Performer workshops or articles ever written since way back in April 2001 (including those from when the column was called Performer Notes). But I've also recently created a dedicated Performer Notes web site, which gives easy access to those same articles — over 100 of them! There's also lots of extra information, including links to the best third‑party developers and various online DP resources. You can find it at www.performernotes.co.uk.