When you need to tweak or re‑work a track to produce alternative versions, DP has features that make it easy. 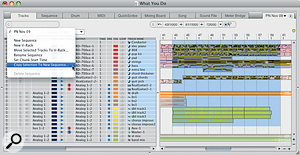 Commands in the Tracks window sequence menu let you copy an entire sequence, or part of a sequence, ready for separate development.

It's great when a DP project goes easily from start to finish without hitches, but few are that accommodating. More often than not — especially when clients are involved — you have to tweak, re‑work, and produce alternatives. This month, we look at the DP features that are worth their weight in gold in those situations.

Imagine this: you're near the end of a song or soundtrack production, but now your client wants to hear alternative versions, with different lengths and structures. There's an easy way to achieve this:

1. In the Tracks window, hit Apple‑A to select your entire sequence.

2. Click the Sequences pop‑up menu at the top left (by default, this says 'Seq‑1' if you haven't already renamed it) and choose Copy Selection To New Sequence.

3. In the dialogue box that appears, give the new sequence a descriptive name, such as 'Alternative A', then click OK (see screenshot, right). 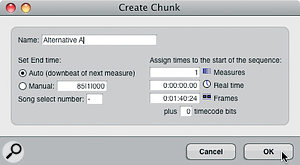 4. Click the Sequences pop‑up again and choose the sequence you just created.

With your track now duplicated into a new sequence, make any changes and edits you like to 'Alternative A', safe in the knowledge that you can switch back to your original at any time. 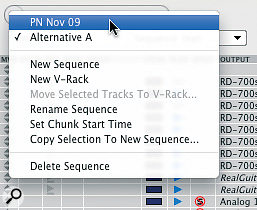 All sequences in a project are accessed from the same Tracks window pop‑up menu.

It's also worth bearing in mind that the Copy Selection To New Sequence command allows you to make selections of any size or type, and effectively bounce out shorter sections of your sequence for separate development. This is superb if, for example, you're working on material for a stage musical or film. Often you'll need to create little play‑outs and underscores related to the main numbers or cues, and by selecting only the relevant sections and measures, before copying to a new sequence, you can generate these quickly, with minimum fuss.

Sometimes you have a completed project but need to make different mixes of it. Maybe it's a song that's been mixed for an album release but now needs a separate club mix, with different tracks accentuated, and with a different approach to compression and EQ, or you've worked on a track for a client and want to be able to play them some alternative approaches. For these, and other tasks, Mix Mode exists. It lets you work on and maintain any number of alternative Mixing Board layouts for an individual sequence.

By default, Mix Mode is off in new projects and sequences; DP tells you that in a little pop‑up menu at the bottom left of the Mixing Board. Turning it on is easy, and all that really means is that you've created at least one Mix Mode mix. To do that, just click the pop‑up menu and choose New Mix or Duplicate Mix.

By default, Mix Mode is off, but turning it on allows you to develop multiple alternative mixes for a single sequence.

Here's a practical scenario: you've got a mix done with Mix Mode off, and you want to start working on an alternative. A logical way to proceed is to get the existing Mixing Board settings into a new mix, and then create another new mix for the alternative. Here's how it works:

1. In the Mixing Board, start off by choosing Duplicate Mix from the Mix Mode pop‑up menu (lower left of the window).

At this point, your sequence behaves just the same as it always has, except that it's now got a name! The next step is to create a new mix, in which you can start changing settings, adding and deleting plug‑ins and so on, for the alternative version. For that, you can either start with an empty, 'zeroed‑out' Mixing Board, or use your existing mix as a basis for the new one.

3. To start a new mix from scratch, click the Mix Mode pop‑up and choose New Mix. As before, it'll get a default name, and you can rename it. To base your new mix on the existing one, choose Duplicate Mix again. This will be named 'Album Mix copy' (or similar), so rename that as 'Club Mix', or whatever, to avoid confusion.

4. Now loading alternative mixes is as easy as choosing one from the Mix Mode pop‑up (see screen above). However, because switching mixes can involve deletion and instantiation of plug‑ins and virtual instruments, I wouldn't recommend doing it during playback. 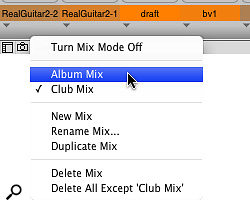 There's little more to be said about Mix Mode; it's a powerful convenience feature that's painless to work with. However, there are a few things to note. First, Mix Mode mixes never contain signal routing information for tracks, so you can't, for example, create one mix for stereo and another that automatically switches all your tracks to surround outputs and panners. Second, when Mix Mode is off, automation data is tied to sequence tracks. With Mix Mode on, automation data is stored in individual mixes, so you could have different automation, as well as Mixing Board settings, between mixes. That's a good feature, but don't write or edit automation data in one mix and expect it to show up in all others. You can copy data between mixes by selecting it in one mix, hitting Apple‑C to copy, and pasting it into a different mix with Apple‑V. But mixes really are separate entities as far as automation goes.

DP7 on the way: MOTU recently announced DP7, which should be available by the time you read this. Guitarists seem to have been targeted with the provision of a new amp modeller called Custom '59, a convolution‑based cabinet and live room emulator, and nine guitar‑pedal emulators. For everyone else, there's a new Channel Strip consolidated window cell, with in‑line EQ and dynamics. This should help ease the tedium of always having to call up plug‑ins for these common processing duties. Less obvious improvements include real‑time crossfade computation, an improved sample‑rate-conversion algorithm, and extended QuickScribe notation abilities. It's an evolution, rather than a revolution, and some might argue more appropriately delivered as DP6.5 rather than DP7, with its $195 upgrade cost. Still, it should improve the DP experience still further, and is being eagerly anticipated by many.

Changing Spots: As I write, Apple have just released OS 10.6, code‑named Snow Leopard and their first Intel‑only operating system. MOTU were quick to issue compatibility information, and the great news is that essentially there's very little, MOTU‑wise, that's broken. Digital Performer works great, along with the entire range of MOTU plug‑ins, with the exception of Ethno, for which an update is promised very soon. You'll need to grab updated drivers from www.motu.com for all Firewire, USB2 and PCI‑424‑based audio interfaces. Also, iLok users should download new system software from www.paceap.com.

As for third‑party hardware and plug‑in compatibility, that is, as ever, much less certain. Those brave (or foolhardy?) users already running 10.6 are reporting few difficulties with many of the major plug‑in developers' products in DP, but at this stage there are precisely zero guarantees that your own favourite plug‑in will work in the new operating system. The only way to be completely sure of being able to continue working is to wait for confirmation of compatibility from the developer, or install 10.6 and DP on a separate drive or partition and do your own testing. Bear in mind, though, that in these early days of Snow Leopard it offers no performance improvements for DP, and there's no way to benefit from its 64‑bit memory addressing. Those days are coming, however, and hopefully by then all third‑party developers will have caught up and we'll all be good to upgrade.

Incorporating multiple sequences into your day‑to‑day DP use is easy and useful. Here's a not uncommon situation: you're working on a complex sequence that's pushing your Mac pretty hard and suddenly you need a 'blank piece of paper', so to speak. Perhaps it's so you can record, edit and mix some sound effects to be dropped into your main sequence as a soundbite, or to mess about with an idea at a different tempo, using a soft synth that would push your CPU usage over the brink. What you need is a new sequence:

1. In the Tracks window, click the sequence pop‑up menu and choose New Sequence.

3. The new sequence always has the same track layout and routing assignments as the sequence that was selected before you created it. If that layout and routing suits you, crack on! If not, click and drag over the names of the tracks you don't want, or hit Apple‑A to select all tracks. Then choose Delete Tracks from the Project menu to get rid of them.

4. Create any additional tracks you need, and get working!

Being able to create multiple sequences within a single project is useful from an organisational perspective. Music‑for‑picture composers often use a separate sequence for each cue, allowing all cues for a single show to be kept together and quickly selected. When recording on location, I often use a separate sequence for each recorded work, especially when varying instrumental forces are used, requiring differing mic setups and track layouts.