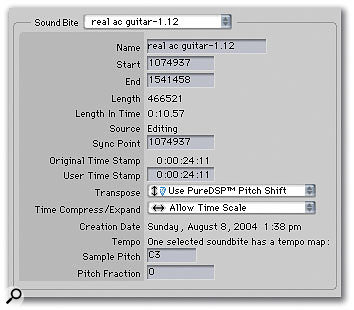 The Transpose pop-up menu in the Soundbite window's info pane is where you can choose between Standard and PureDSP pitch-shift algorithms.

A guide to DP's options for audio pitch and tempo manipulation is on the agenda for this month's instalment of Performer Notes.

Ten years ago, the 'big thing' was the development of non-linear multitrack recording systems, with applications such as Performer (later to become Digital Performer) allowing users the freedom to edit, cut, paste and duplicate sections of audio in a way that was unthinkable with tape. Time will tell, but it looks as though the next 'big thing' — and perhaps just as significant to the way we all work — might well be high-quality pitch and tempo manipulation of audio such as is already offered in Ableton's Live, and even more specialist applications such as Celemony's Melodyne. The new Cubase SX 3 is making moves towards this kind of technology, and if Logic 7 introduces some sort of 'liquid audio' capabilities (see our preview in this issue), most other sequencers, DP included, are going to have to follow suit.

For the time being, though, if you want this kind of audio manipulation you're going to have to get Ableton Live, which, when Rewired to a host sequencer, makes a lovely setup. I'll be covering the DP/Live partnership in next month's Performer Notes, but this month I'm taking a look at DP 's existing features for manipulating the pitch and tempo of audio — a far cry from Live, maybe, but useful anyway.

DP's Transpose window works for both MIDI and audio, albeit with some slight differences. To apply a pitch-shift to audio using it, you first need to choose some audio, either by selecting an entire Soundbite (or Soundbites) or by selecting a region, using the I-Beam tool, for example. Then open the Transpose window, either by hitting Apple-9 or choosing 'Transpose...' from the Region menu. Because DP can transpose audio and MIDI at the same time if necessary, you have to ignore some of the MIDI-only options, such as transposing by anything other than Interval, and the Harmonise function. Additionally, you need to check the 'Transpose audio' box and, of course, choose an appropriate interval. One audio-only option is the 'Fine-tune audio' setting, where you can specify an additional pitch-shift amount in hundredths of a semitone (cents), up or down. After all that has been set, you just hit Apply, then DP does the processing in the background, allowing you to get on with other tasks while it works. 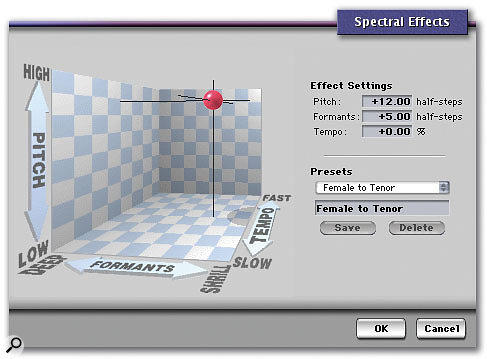 The Spectral Effects window is an intuitive front end for DP's PureDSP pitch algorithm, and can also be used to time-compress (or expand) audio.

You choose between DP 's Standard and PureDSP algorithms by selecting a Soundbite in the Soundbites window, then using the Transpose pop-up menu in the Info pane. Because this is a preference that is set on an individual Soundbite basis, it's possible to pitch-shift several Soundbites with different algorithms simultaneously. It's also possible to prevent a Soundbite from being pitch-shifted at all, by choosing 'Don't Pitch Shift'. This is handy for unpitched parts such as drums when you're pitch-shifting other Soundbites en masse.

The difference between Standard and PureDSP pitch-shifting, as you may have guessed already, is that PureDSP is optimised for monophonic parts. In fact, if you try to use it to transpose chordal or monophonic parts it's rarely at all successful. Standard pitch-shifting makes a better job of these, but the working range is certainly limited to just a few semitones before serious artifacts become obvious.

If you are working with monophonic parts, though, you might want to consider DP 's Spectral Effects instead of PureDSP Transposition. The Spectral Effects dialogue box is accessible via the Audio menu, after you've selected some audio in one of DP 's editing windows, and offers control of formant-frequency shifting independently of pitch. This works particularly well on voices, and can be used to quickly mock-up fairly believable backing vocal 'ensembles' with just one singer, dialling in small formant shifts to alter character and pitch changes to swap gender! The user interface is rather nice, with the current pitch-shift (and/or time-compression) settings represented by the location of a red ball in a pseudo-3D space. Moving the mouse carefully around the ball selects different cursors, which in turn allow the ball to be moved up/down, left/right, or to the front/rear. In practice, however, it's probably easier just to interact with the value boxes — clicking and dragging in them allows for very fine value changes. There's even a preset scheme, which showcases some of the more extreme treatments that are possible.

DP is capable of both timestretching and time-compressing Soundbites, and therefore changing the tempo of rhythmic material. There aren't any choices of algorithm (sadly), but the stretch or compression can be effected in several ways.

DP's Scale Time dialogue box, accessible from the Region menu, is one of the easiest ways to apply time compression or expansion to Soundbites.

One way, as we've seen, is to use Spectral Effects, and its Tempo setting, to impose percentage changes in length. But perhaps the easiest way is to simply point at the upper left-hand or right-hand corner of a Soundbite in the Sequence Editor until the cursor turns into a 'pulling' hand, then click and drag. If you have the edit grid turned on, the length changes will be quantised to the grid, though this behaviour can be toggled off (or, indeed, on) in the usual way, by holding down the Apple key as you drag. If you need more accuracy, or prefer to work in a numerical way, try the Scale Time command. You start by selecting all (or part) of a Soundbite, then choose 'Scale Time...' from the Region menu. In the dialogue box that appears you're shown the current start and end time of your selection, and the duration. In the lower of the two lines you can select new values, and specify length in percentage terms if necessary. Time units are switchable using the little button at top right. To apply the change, just make sure 'Time-scale audio' is selected, and hit OK.

Using Scale Time you can do some clever things, such as taking a rhythmic loop Soundbite that doesn't match your sequence tempo and, using the Measures time format, define a new length for it that fits in with your tempo. Similarly, you can specify duration in SMPTE time format, making the fitting of ambiences and effects to specific time locations easier.

If your needs are primarily musical, however, it's well worth looking into DP's Soundbite tempo functions. By specifying tempo information for Soundbites you can make them follow tempo changes in the Conductor Track, actually tracking any speeding up or slowing down of the music. For more on this, see the Performer Notes column from way back in June 2001.

I covered a bumper crop of goodies in last month's Performer Notes, but the flow of high-quality new plug-ins shows no sign of abating. 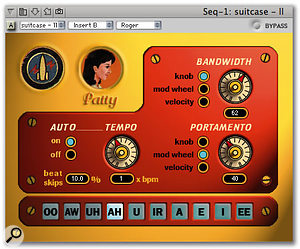 This is Roger, one of the three quirky but great plug-ins that make up Audioease's Rocket Science bundle, now available in MAS format for DP 4.

Making a welcome return to DP in OS X is PSP's Mixpack. This is a bundle of four plug-ins — Mixbass, Mixsaturator, Mixpressor and Mixtreble — whose applications go well beyond final mixing or mastering. In particular, I find Mixpressor an excellent compressor which works well on both individual tracks and whole mixes. Mixsaturator can also be put to great use in fattening up individual tracks, and Mixtreble has various handy uses, including cutting hiss, widening the perceived stereo image, and perking up flat-sounding transients, as well as acting as a 'conventional' enhancer. All in all, Mixpack is a versatile set of plug-ins that you may find become 'bread and butter' tools, handling basic tonal and dynamic processing tasks in a very sophisticated and subtle way. Mixpack costs $149 from www.pspaudioware.com.

Hot on the heels of Audioease's Nautilus bundle (see last month's column) comes their even more idiosyncratic Rocket Science bundle. Rocket Science is older than Nautilus and presents an even odder selection of processors. For example, you may never have considered the possibility of treating your tracks with a 'Multiple Gender Vowel Bank', but should you need to, there's Roger. As single-purpose plug-ins go, this has got to be one of the most limited, but it might be just what you need one day, and it can certainly produce some funky and often funny treatments!

Next up is Orbit, a cross between a reverb and a doppler processor. It localises sounds in an acoustic environment, also allowing them to move on various paths, and employing psychoacoustic techniques to make them seem as though they can pass behind a listener monitoring in stereo. Maybe it's not a plug-in you'd use every day, but it comes into its own when you need that special something. Finally, Follo is a resonant band-pass filter whose cutoff frequency is controlled by the dry signal's amplitude. Applications include autowah and weird vocal treatments. Rocket Science might not appeal to those looking for ever more high-end EQs and compressors, but it offers plenty of scope for anyone who likes their audio treatments 'out there'. It costs $199 from www.audioease.com.