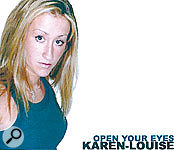 Every one of the songs on this four track CD could be a hit in the lightweight-pop, girl- or boy-band mould. To receive a demo with one potential hit single on it is rare enough, but four — that's almost unheard of. Writer and producer Richard Neil has just finished the final year of his music degree in Brighton and if there was any justice in the world he would be snapped up as an in-house writer for any company peddling music in this genre. He's also been canny in his choice of singer for the recording. Karen-Louise has a voice which tracks up beautifully for backing and block vocal parts, as on the third song, 'Be The Remedy'. As a lead vocalist, her voice has the sort of youthful sound which also makes it accessible to pre-teens and puts the songs firmly in the right potential market.

In terms of the the vocal recording, I've always found that Audio Technica condenser mics (Richard uses an AT3035) work really well on this kind of female voice. They give a light, slightly artificial high-frequency lift that slots the voice nicely into the backing track.

I thought the arrangements were generally excellent, although I'd take issue with a few things. For example, the kick and snare fill and the extra bar at the end of the intro to the first song didn't really add anything and could have been cut — in this style of music you need to get straight to the point, which, for the most part, is exactly what this demo does. In the same track, the first chorus could have been given a greater dynamic lift by bringing in some backing vocal 'ahhs' or 'oohs' a little earlier. There's little point in attempting subtlety on a chorus in this genre, and the existing backing vocals, when they come in, would then lift the dynamic even more. I'm also not sure why Richard opted for such a sudden stop at the end of the second track when a fade out would have been better. However, these minor points don't detract from the quality of the songwriting and vocal performances.

As for the other sounds, the use of guitar is tasteful, especially on the opening track, although I thought the string pad sounds on the subsequent mixes sounded better than those on the first. In technical terms, these songs could be improved in the hands of a really hot mix engineer with access to better keyboard sounds and effects, but I think Richard has done an excellent job with the equipment available to him.

You might not listen to his songs for the lyrical content but you could well be humming them in the street in the next couple of years! His web site shows he's now collaborating with a different singer and attempting a more mature MOR genre — let's hope it works as well as this offering.

If you're buying a microphone for non-commercial applications, and are on a reasonably modest budget, it's still possible to pick the out one to suit the style your voice and your music. As we can see from this month's reviews — Karen-Louise and the Dayglo Fisherman in particular — the right vocal mic can make a huge difference to the overall production. It's well worth the effort of borrowing or hiring as many microphones within your budget as you can and trying them out in your own recording environment. Talk to your local retailer — they should be happy to let you try out some mics if it's clear that they'll definitely make a sale. However, as Paul White pointed out in his article on selecting a microphone in SOS July 2003, if you haven't got a good acoustic space for recording, you'll never get the best out of your mic. 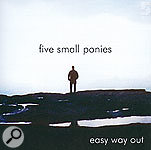 This is a nicely recorded CD with good songs, lyrics and performances from the whole band. Mark Currey (lead vocals, guitar and mandolin) has a wonderfully relaxed singing style and the whole production is tailored to suit his comfortable vocal delivery.

I was not surprised to read in the accompanying letter that the Wharfedale hi-fi speakers used to mix this demo have since been ditched in favour of some monitors designed for studio use. Even so, the mixes are generally of a high standard. The band are most concerned about their drum sound.

The drums, in keeping with the rest of the band, have a very open and natural sound. To my ears, it sounds like the overhead mics were positioned a little too far away from the kit — there's certainly a fair amount of kick-drum spill and a good deal of undesirable room ambience too. This is accentuated by the level of the overheads in the mix — they are a touch too loud and this over-emphasises the crash cymbals — but the overall sound is not really that bad. Mark is worried about the snare drum's tuning but, again, I think it sounds fine, if a bit lacking in aggression. I'd certainly be more worried about the kick drum, which, apart from the spill, is virtually inaudible. The drier sound provided by the AKG D112, presumably close miking the bass drum, should have been given more prominence in the mix. The reverb on the kit is also a bit too long for my taste, especially when the overheads and, consequently, the real room sound, are at the level they are in the mix.

Elsewhere, I was impressed by the guitar sounds, both electric and acoustic. The first track on the CD features a rather good tremolo effect, and the use of stereo imaging to create a larger-sounding mix by panning the guitars works well. The only song where the stereo image seems a little out of balance is the second, 'All You Need', which features a mandolin. The bright tone of the mandolin skews the balance somewhat, giving an emphasis to the left side of the mix. However, the mandolin could be balanced with a brighter guitar sound panned to the right. Its level could also be lowered without it losing definition in the mix, thanks to the instrument's brightness. Elsewhere, some of the acoustic guitar sounds are quite excellent, especially the strummed acoustic on the third song which slotted into the mix with ease.

Minor criticisms apart, this is a good piece of work. The songs and arrangements are excellent, and the musicianship is of a high enough standard to do them justice. I don't think they have the harder edge which bands like Crowded House and Counting Crows (who they compare themselves to, and rightly so) can bring out when they need to, but the relaxed style of the lead vocal demands a lighter touch in the production. I think the band have achieved this.

Now this is what I call real ambient music — it's so laid back it's almost horizontal! Gentle chord progressions and the clever use of occasional sub-bass tones under the swirling, mellow pads create interest, but not enough to disturb the overall air of tranquillity. Bateso also incorporates some looped samples he recorded himself on a visit to the Nepalese Himalyas. These and other location recordings have been painstakingly assembled into a collage for the second track, fittingly entitled 'The Expanse'. Yet it's the third track, with its thunderstorm, chanting Tibetan monks and simple ethereal chords, which really sparks the imagination. It's surprising what you can achieve with a portable Minidisc recorder, some simple keyboard chord voicings and a creative mind.

The instrumental backing to all of these tracks sounds good in an '80s sort of way (think Thomas Dolby and the Thompson Twins) until the vocals begin. The truth is that, of the Dayglo Fishermen's two vocalists, Richard Burton gets away with it because of the semi-spoken style of his delivery, but Ginny Owen needs to work on the accuracy of her pitching. Her voice is appealing and somehow very English, and people no doubt draw comparisons to Kate Bush when they hear her sing. Her voice also has a certain vulnerability and the band therefore need to consider more how the vocal is fitting into the overall sound. Currently, they're using a Shure SM58 dynamic mic and the hard sound this gives the female vocal doesn't sit well with the edgy synth and drum sounds used in the backing tracks. A warm-sounding condenser mic would be more suitable.

The music on this CD is a surprising mix of classically influenced compositions and retro electronica. Perhaps the strongest example of this combination is the heavily orchestrated fourth track on the CD, entitled 'A New Beginning'. Here composer Anthony Benskin has produced a pretty good impersonation of a full orchestra using his synths and sampler. These well-chosen sounds, coupled with the fine use of dynamics in the arrangement and a good female vocal sample make for very good listening indeed. The weakest sounds are the mid-range strings, where Anthony seems to be playing block chords. It's obvious when he releases the chord that the sounds are artificial because of the timing of the release. This could be improved by giving the samples a slightly longer release time or even playing the component notes of the chords individually for a more natural feel. 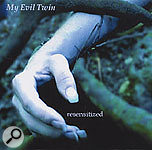 The excellent heavy guitar sounds on this demo are generated using a Line 6 Pod XT and really drive the songs along. However, some improvements could be made elsewhere. For example, the vocals are mixed too loud. If they were sunk further back into the track, you'd still be able to hear them because the wide positioning of the guitars in the stereo mix keeps them out of the centre of the arrangement, where the voice sits. Additionally, the overall effect would be one of more energy: a vocal cutting through a big-sounding guitar mix — almost fighting it, in fact — has more appeal to the listener in this heavy genre of music. A touch of upper-mid boost could also be added for more aggression, but going overboard with the EQ will wreck what is a good sound already. The weak link in the demo is the Alesis D4 drum machine, which is simply too lightweight for the music, and I think the group will eventually have to look elsewhere for their drum sounds. In the meantime, I suggest they look for a better snare sound from the D4 — the 'Edged Out', 'Piccolo' or 'Rim-Center' patches, for example — and see if dropping the pitch of the snare sound a little bit or adding a bit of boost at 200Hz will add some punch.