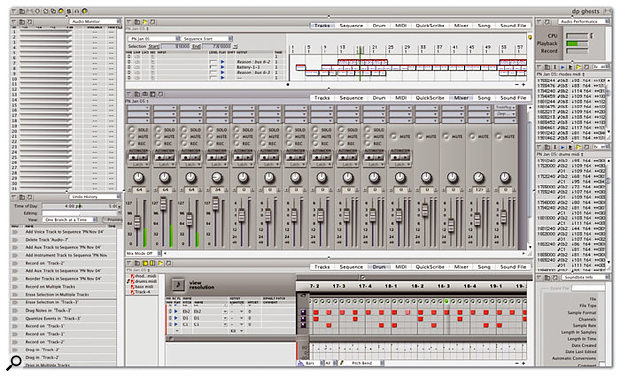 A fairly complex, nine-cell Consolidated Window setup using both sidebars and varying numbers of rows. The Mixing Board has focus here, as indicated by its darker title bar.

Digital Performer 4.5 is being hailed as the most important upgrade in the application's history, and genuinely offers a huge step up over version 4.12, which, in terms of its feature set, still had its roots firmly planted in DP 3. As such, DP 4.5 might well be the catalyst that will persuade the majority of OS9 die-hards to commit to an all-OS X system. There would certainly seem to be no better time to switch, if you haven't already. As long as you have a fairly recent Mac you should find life in 'X' a thoroughly pleasant experience.

One of the greatest new features of DP 4.5 is plug-in latency compensation, which eradicates the timing problems caused by plug-ins (such as Altiverb, or various Waves processors) that impose a delay on the audio they treat. In DP 4.5, tracks which use these plug-ins have audio delivered to them ahead of time, so that they eventually line up with other tracks. As far as the user is concerned, everything plays in time and no thought is required! In fact, the feature has (and arguably needs) no user-configurability at all, other than an on/off switch, found in 4.5's revised Configure Studio Settings dialogue box, accessible via the Configure Audio System sub-menu in the Setup menu. Latency compensation works for MAS and AU plug-ins, and also for TDM and RTAS if you run DP with Digidesign hardware. TC Powercore and Mackie UAD1 cards are accommodated, at the same time if necessary, and the system works on aux and instrument tracks as well as voice tracks. Obviously, though, it doesn't work for incoming live audio — DP can't get musicians to play ahead of time! Also, for the time being, latency-ridden VST plug-ins hosted in VST Wrapper still impose a delay, though Audio Ease are incorporating latency compensation into their next release of the Wrapper.

DP 4.5 has mouse scroll-wheel support, and this really comes into its own in the Consolidated Window. The scroll-wheel primarily controls vertical scrolling of windows, but holding down the Shift key enables horizontal scrolling. In the Sequence Editor, holding the mouse pointer over the vertical scroll bar before turning the scroll-wheel results in a much faster scroll, while faders, pans and aux sends in the Mixing Board can all be controlled by pointing at them and then turning the scroll wheel.

There's a nice new feature in 4.5, in the form of the Startup Clipping Window. This is a per-project window into which you can drag documents from other applications which will open after the DP Project opens. This is ideal for Reason or Live documents associated with individual DP Projects.

In Setup menu / Configure Audio System / Configure Hardware Driver, there's a new Work Priority setting. In simple terms, this determines how DP fits in with OS X's multi-threading capabilities. While it should normally be left on 'High', users of some audio interfaces may get better performance with it set to 'Medium' or 'Low'. Some users have also reported that a lower setting eradicates the processor spiking problem on single-processor Macs.

DP 4.5 seems to make an existing DP 4.1 installation unstable, so you need to be prepared to commit fully to the new version before installing it. Also, it's worth selecting a DP Project file in the Finder, choosing Get Info from the File menu, changing the 'Open with' setting to DP 4.5, then selecting 'Change All'. That way you'll never have DP 4.12 opening by accident.

As far as workflow goes, this is the crowning glory of DP 4.5. DP has traditionally been a very 'windowy' app, and I'm sure I'm not alone in having found the resulting sprawl overwhelming at times. Quite aside from organisational considerations, having dozens of windows open, even if you can't see most of them, is a drain on processor power. Despite more recent OS X innovations such as Exposé, valuable time can be wasted just trying to find a particular window, not to mention the confusion that can be caused by editors for non-current sequences hanging around and thoroughly outstaying their welcome.

The Consolidated Window addresses all of that. Basically, it's one big window with up to three columns — a central main body plus a left and right sidebar — and potentially unlimited 'rows' within each column. The resulting 'cells' can contain DP 's most important windows. It's all highly configurable, and as you pass through the stages of development in a Project the Consolidated Window can offer you almost as much flexibility as individual windows, but a far greater degree of organisation and accessibility. I can't foresee a situation, except perhaps when using a multi-monitor setup, when I wouldn't use it exclusively from now on. 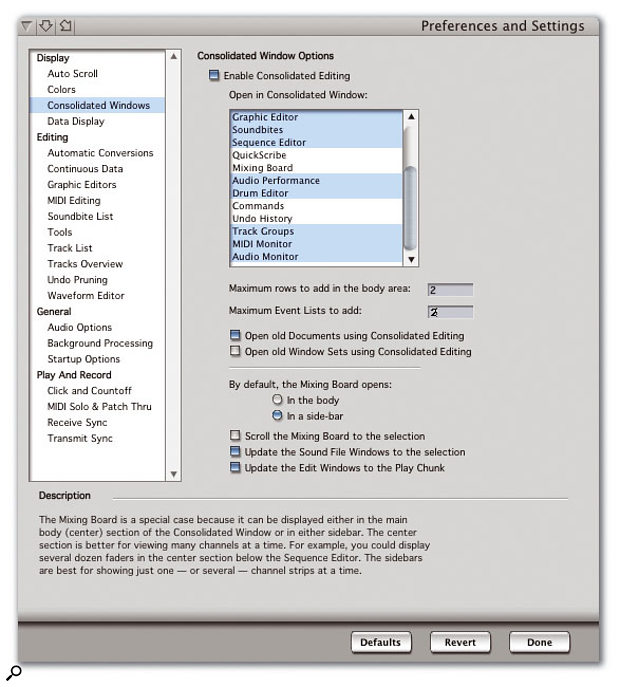 DP 4.5 has consolidated its preference windows too, so now all preferences are collected together in one place.

To start using the Consolidated Window, you have to turn it on in DP 's new Preferences Window, which is accessed via the Digital Performer menu. There's a dedicated preference 'pane' with (uppermost) an 'Enable Consolidated Editing' check box (see screen overleaf). Once you've checked this, you can choose which windows will automatically form part of your Consolidated Window when you open them, and which will open separately as normal. The options relating to rows and Event Lists, determine the maximum number of cells DP can create when you open windows in the normal way. As we'll see, though, it doesn't limit the complexity of your Consolidated Window when you set it up 'manually'.

If you now create a new project with the Consolidated Window preference turned on, you'll be up and running. The default Tracks Overview appears different, with 'tabs' at the upper right, and apparently two title bars, with a thin divider between them, and some new icons in the top title bar. This is the Consolidated Window in its simplest form, with just a single cell — the main body. The tabs give quick access to other main windows, and the two mini-menus do different things, the lower one handling Track Overview functions as normal, and the one above dealing with Consolidated Window functions. You can split the main body, and create a new cell very easily, by dragging down the divider between the two title bars. You're effectively dragging a new window 'past' the Tracks Overview, and DP will create a Sequence Editor for you, as that's the next tab along from 'Tracks'. As this new window is still part of the main body, it also has tabs for switching between different views. You could alternatively have opened a new main body cell by using the window buttons in the Control Panel, or with standard shortcuts such as Shift-M for the Mixing Board. However, once there are two cells open, further window-opening commands don't create a new cell but instead switch the view of one of the cells. Which one is switched is determined by a new concept known as 'focus'. You'll notice that when multiple cells are open one of them will have a title bar darker than all the others. This cell is said to have the present focus, meaning that it will be the one that switches if you send a window-opening command, and also that its contents will be affected by certain other commands (such as the Search command) as if it were the uppermost window in a 'normal' window environment. Changing focus is as simple as clicking a cell's title bar.

Dragging the divider between the two cells allows you to divide the window area as desired, but you can also drag a 'new' divider from the top to create a new cell. Cell can be re-ordered inside the window, by dragging their title bars and 'dropping' them, and you can delete a cell by giving it focus and then hitting control-W or choosing 'Close Cell' from the uppermost mini-menu.

You can also split the Consolidated Window horizontally, using 'sidebars'. There's both a left and a right sidebar, each with its own new title-bar button. The right sidebar's button is at the far top right of the Consolidated Window. Pressing it causes a new column to appear, but as this is a sidebar there's a pop-up menu instead of tabs, and you're given a different choice of windows — basically, ones which are more suited to being viewed vertically. So there's no option to have the Tracks Overview or Sequence Editor in a sidebar, but you're welcome to choose Event Lists, the Soundbites Window or the Audio Monitor Window. The width of the sidebar can be adjusted, and idebars are opened automatically if you call up a window such as Soundbites or Markers. With both open, you can drag cells from one sidebar to another.

Only the window types selected in DP 's Preferences open automatically in the Consolidated Window. Some users might prefer, for example, the Mixing Board to always open in its own window. However, it's easy to pop most windows in and out of the Consolidated Window, by using their Popout button, or the imaginatively named 'Pop-back-in' button. These are title-bar buttons that appear either as a right and upwards facing (Popout) or a left and downwards facing (Pop-back-in) arrow. This feature works very intuitively.

Consolidated Window setups can be captured as Window Sets in the normal way, and MOTU provide some excellent ones as starting points. These are accessible via the topmost mini-menu, where there's also an option to 'Update Edit Windows to Play Chunk'. This is a godsend, meaning that if you use multiple sequences in a project, you never get 'redundant' cells belonging to other non-current sequences in a Consolidated Window.

All in all, the Consolidated Window is a triumph of interface design — massively flexible, yet intuitive and easy to use. DP users, especially those with laptops, have every reason to feel smug.

It may not look like much, but the ability to have stereo aux sends marks a great leap forward in convenience for DP users.

This is one of the less obvious benefits of DP 4.5, but it's a very important enhancement. The Mixing Board's aux section has been, until now, one of DP 's weaker aspects, with poor support for stereo and surround tracks, and only the roughest indication of send level.

However, in DP 4.5 the aux section has been redesigned. First you can have up to 20 sends per track via the Mixing Board's 'Set Number of Sends...' mini-menu option. Each send is then allocated a vertical slice of the Mixing Board to itself, rather than being paired up as before, and quick access to stereo and surround buss Bundles is now accessible via an aux's pop-up menu.

In the case of stereo sends, you now get one send-level knob (yippee!) and one balance knob, both of which display their value as you adjust them. When it comes to surround sends (for which you need to have already set up a multi-channel buss in the Audio Bundles window), you can call up a surround panner by clicking the little circle icon that appears next to the send-level knob. And this is just the tip of the iceberg — there are other new aux-related enhancements I'll be looking at in next month's Performer Notes.