Another crop of news, advice and tips is presented in the latest instalment of our essential Apple-users' column.

Apple have staged a fair number of special events dedicated to music in the last few months, and on 26th October Steve Jobs used another such event to say "hello, hello" to a collaboration with U2, who are currently promoting their new single, 'Vertigo', as well as announcing a new generation of iPod with a colour screen capable of displaying photos. 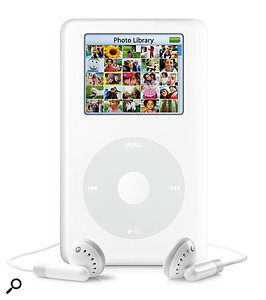 The iPod Photo is the most feature-rich iPod ever, offering a colour screen and a 40 or 60GB drive.The iPod Photo is the newest member of the iPod family and, significantly, features a two-inch 220x176 backlit LCD screen capable of displaying 65,536 colours, compared to the greyscale screen of the same size used on the regular iPod, or the 1.67-inch screen on the iPod Mini. In the same way you've always been able to synchronise music from your iPod with iTunes, the iPod Photo, in conjunction with iTunes 4.7, allows you to sync to your photo library (so long as the pictures are stored in JPEG, BMP, GIF, TIFF or PNG formats) in iPhoto (for Mac users), or in Adobe Photoshop Album or Elements (for Windows users). It's then possible to browse the photos on your iPod, of course, or run a slide-show using music from your iTunes music library. And any album artwork you may have stored in iTunes is also transferred to your iPod Photo and can be viewed with the appropriate song.

Not everyone will want to see your photos on a two-inch screen, so for this reason the iPod Photo offers the ability to connect to your TV or video via S-Video, with the included iPod Photo Dock and AV cable. While the addition of a colour screen to the iPod might suggest the battery life will be worse than the 12 hours offered by the standard iPod, the reverse is actually true and the iPod Photo's reported battery life is an impressive 15 hours — or five hours of continuous slide-shows with music. To accommodate all of your photos and music, the iPod Photo is available with either a 40 or 60GB drive capable of storing 10,000 and 15,000 songs respectively (based on four-minute songs encoded at 128kbit/s). 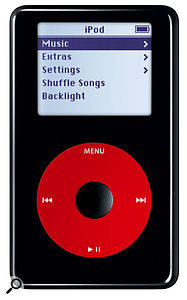 The iPod U2 Special Edition should be a hit with fans of the band.The iPod Photo is an attractive little gadget, although it's slightly bigger and heavier than its older siblings. The front of the new device measures the same as the iPod, at 4.1x2.4 inches, but the depth of the former (in either 40 or 60GB configurations) is 0.75 inches, compared to either 0.57 or 0.69 inches for the latter (20 or 40GB models). The iPod Photo weighs in at 6.4 ounces, as opposed to the regular iPod, which weighs either 5.6 or 6.2 ounces; and in terms of cost, the iPod Photo is priced at either £359 or £429 for the 40 and 60GB models respectively.

After introducing iPod Photo, Jobs went on to announce the iPod U2 Special Edition, a new model based on a standard 20GB with a new colour scheme featuring a black surface with a red click wheel, along with signatures of each member of the band on the back of the iPod. Can't wait for the iPod Chumbawamba! The iPod U2 retails for $349 in the US (£248.99 in the UK), and although that's $50 more expensive than the regular 20GB iPod model, which sells for $299 (£219), it includes a $50 (£40) voucher towards purchasing a copy of The Complete U2 from the iTunes Music Store. This collection includes 400 U2 tracks, including all albums and 25 rare and previously unreleased tracks. It should be available by the time you're reading this in the middle of December.

Aside from new iPods, Apple also announced a European Union version of the iTunes Music Store, to be available in Austria, Belgium, Finland, Greece, Italy, Luxembourg, Netherlands, Portugal and Spain. The store features approximately 700,000 songs, and each one is available for 0.99 euros.

After discussing Logic 7 's new distributed-audio feature set in last month's Apple Notes, I wanted to make a few more observations, after a little experimentation, this month. Firstly, I wanted to clarify one of the comments I made about needing Power Macs to run as node computers (using the Logic Node application) since they have both a G5 processor and a Gigabit Ethernet connection. There is, of course, one other model in Apple's Mac product range that fits both of these requirements: Xserve.

In many ways, you might consider Xserve to be the ideal Logic Node computer, especially with its elegant 1U design that fits into a standard 19-inch rack. What's more, the Xserve G5 is available in two configurations: as a standard server with three SATA drive bays and an optical drive; or as a so-called Cluster Node with just one SATA drive and no optical drive. The Cluster Node is designed for grid-computing-style systems where you want more processing power but don't need the inbuilt drive options (or the unlimited client license of OS X server included with the standard Xserve G5 model). This makes it potentially ideal to use for running the Logic Node application.

However, at the time of writing, what makes the Xserve G5 models not quite ideal as Logic nodes is the issue of processing power and price. A single-processor 2GHz Xserve G5 starts at £2399, a dual-processor 2GHz model costs £3199, and a dual-processor 2GHz Cluster Node also sells for £2399. Looking back to the Power Mac models, the high-end dual-2.5GHz costs less than the single-processor Xserve, at £2199. The only downside with the Power Mac is that it isn't so easy to rackmount. Companies such as Marathon offer vertical-mount solutions, plus a horizontal mounting that requires you to cut the handles from your Mac, but these are not for the faint-hearted.

Aside from choosing suitable Macs to be your Logic nodes, there's one important thing to realise about the current implementation of distributed audio in Logic 7, and that's the fact that you can only run Logic 's own instruments and effects on other computers, with the notable exceptions of EXS24 and Ultrabeat, as mentioned last month. This means that if you have a channel that uses suitable Logic instruments and effects exclusively, this channel can be offloaded to a Logic node on playback. However, as soon as you add an Audio Unit to a channel, that channel must now be calculated on the host — including any Logic instruments and effects you might be using on that channel, since the synchronisation issues involved would add too much latency.

Personally, I consider this a little disappointing, but it's not all bad news. Firstly, if you run large quantities of Logic instruments and effects, especially Space Designer or Sculpture, the current idea of distributed audio will suit you and your studio very well. However, what's potentially more interesting in the long term is to remember that while Audio Unit plug-ins can't currently be calculated on Logic nodes, Apple are also responsible for the AU specification. This means that there is at least a possibility of change in the future.

Upgrades of one part of a system are often the cause of other parts of the same system becoming incompatible, and one example of this in the recent Logic 7 upgrades has been many Audio Unit plug-ins becoming incompatible with the latest version. Logic 7 incorporates Apple's Audio Units Validation Tool, meaning that only Audio Units deemed by Apple's tool to be fully compatible with the Audio Units specification can be loaded and used by Logic (with one caveat described below). In some ways this is obviously a good thing, as it means that users should encounter the minimum of problems caused by third-party Audio Units plug-ins when using Logic, but it is equally a rather brute-force way of ensuring plug-in developers strictly observe the standard. 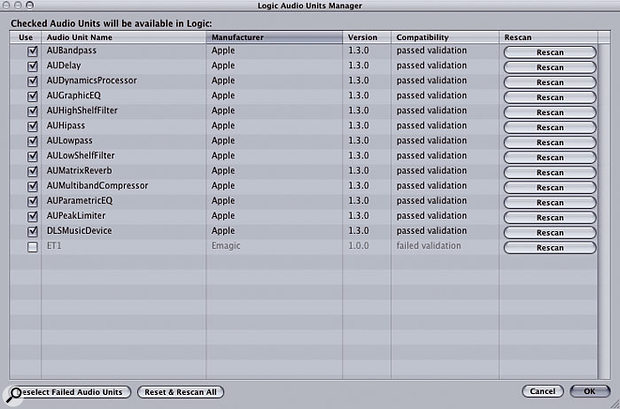 The Logic Audio Unit Manager utility allows you to see which plug-ins have passed or failed the new validation test, and manually re-enable any plug-ins at your own risk.

Most plug-in developers who were affected by this situation, such as Native Instruments, now have suitable updates ready for download, offering full compatibility with the validation tool. Apple provide a list of compatible plug-ins. For those who are interested, the guideline pages for Audio Units developers offer a download of the latest version of the Audio Units Validation Tool utility.

As a side note, it is actually possible to re-enable Audio Units that fail the Audio Units validation test, in the Logic Audio Unit Manager (Preferences / Start Logic AU Manager). Obviously, this isn't recommended. In fact, Apple state that Audio Units that crash the validation and are manually enabled can affect the testing of other plug-ins, crash Logic, and lead to the corruption of song files. Consequently, it's useful to remember that you can hold down Shift and Alt while starting Logic, to run the application in Audio Unit Safe Mode. In this mode, only validated plug-ins will be used and any manually enabled plug-ins are ignored.