Synchronising sequences in Logic to live audio tracks can really help give your music the edge, but what's the best way of doing this? We look at the options, and weigh up their pros and cons.

With live playing returning more and more into the recording process, I want to take a closer look at the different options Logic provides for locking up its sequencing to live takes. This means that we want to use the 'loose' timing of a player to slave further takes to, rather than correcting the player's timing to the metronome.

In principle there are two very different methods of achieving lock between the MIDI sequencer within Logic and an audio track that the timing should be based on. Which of the two you opt for depends largely on the material you are recording and how you are interfacing with the rest of the studio's equipment. Both methods have their advantages, and you really have to decide what it is you want to achieve.

The two approaches achieve the timing variations by different means: you can either vary the tempo of the clock to follow the variations of the live take; or you can work to a fixed clock and use grove templates to adjust the timing. The former approach is more suited to a situation where you want to create a continuous reference to a take of a live band, say. The latter method is better if you are sequencing pattern-based arrangements that you want to base on loops or sections of live takes.

While mapping the clock undoubtedly gives the more solid result in a 'traditional' overdub-based recording process, the Groove-Templates method is more flexible and lends itself to nonlinear arrangement approaches, when the writing, recording, and arrangement processes blend into one. Furthermore it is possible to combine different Groove Templates and thus achieve interesting rhythmic effects. On the other hand, you can lock any number of slave devices, be they hardware- or software-based, to a tempo map, so your Rewire and VST/AU applications will lock to the drummer just as tightly as any (MIDI) drum machine or slaved sequencer.

Logic provides an automatic way of re-clocking the song which Mike Senior discussed in detail in the April 2002 Logic Notes. However, I found that this feature doesn't really give you the accuracy you need to tightly layer percussion tracks and loops with live drums. So I create my new tempo maps manually, which gives a much higher degree of accuracy.

Whichever way you decide to work, you need to have suitable audio material to work on. Select the audio track(s) that contain the most accurate, easy-to-read tempo information you want to lock to. If you have a choice of microphones, select the closest, for example close-miked kick, snare, hats, and toms of a drum kit, not the overheads. Make sure that the fastest rhythmical subdivision you want to be able to lock to is included in your selection. So you might choose the bass drum and snare, together with a conga track you recorded. It is worth bouncing these tracks together if you're planning on creating a new tempo map, since a lot of editing is involved in the process and it will be more easily done on one track or stereo pair.

When bouncing these tracks, keep in mind that you are doing this purely for the tempo map, so ignore any aesthetic considerations such as balance or EQ and set the levels so that you can visually pick out attack transients in the sample editor. Don't use any dynamic processing in this bounce, since compressors and gates have a tendency to distort the shape of the attack. Obviously you should hang on to the original audio files in order to mix them down later on. It makes sense to create the bounce starting from bar one, beat one. Insert the bounced track into your arrangement.

Input MIDI From Your QWERTY Keyboard

You can quickly input MIDI note data into Logic's editor windows without having to connect a MIDI keyboard or do a lot of clicking and dragging with the mouse. Once you're in Input mode in your choice of editor window (the little 'MIDI input plug' button will light up red), there are Keyboard Input Key Commands which will allow you to input MIDI in step time. First open the Keyboard window, from the main Windows menu, so that you can see what you're doing. Now select the step size and velocity using, for example, the 1/4 Note and Velocity 80 (mf) Key Commands. Then check that the little range bar above the keyboard in the Keyboard window is where you want it, using the Octave +1/-1 Key Commands as necessary, and finally choose the note's pitch using, for example, the Note 'C#' Key Command. The note will then appear and the Song Position Line will move to the end of the step ready for the next note. If you make a mistake, the Erase Key Command will remove the note and go back to the beginning of the step.

A few other Key Commands will also quickly become useful. Sustain Inserted Notes will extend the previous note by the step size every time it's pressed, and Rest will insert a gap of that size. If you want a chord, then you'll want to switch on Chord Mode before entering the first of the chord notes. When you've finished inputting the chord, the same Chord Mode Key Command will switch back to single-note input and move on the next step. Finally, you can navigate backward and forward by the step size using the Step Backwards/Forward Key Commands — this is particularly useful if you want to input a complex part with overlapping chords and notes. Mike Senior

Call up the Audio To MIDI Groove Template option from the Audio Window's Functions menu, and you'll be presented with the settings dialogue box.

If you are not planning to use a take in its entirety, but want to retain the natural timing of sections of a recording, creating Groove Templates is the quick and flexible way. 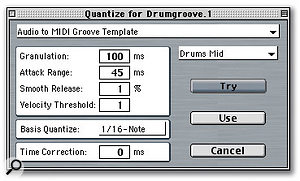 The simplest way to work with the settings dialogue box is to choose one of the presets available from the pull-down menu at the right.

After you have selected the bits of audio you want to use, open the Sample Editor and select the Audio To MIDI Groove Template option in the functions menu. Start off with one of the presets provided and adjust the parameters in the pop-up window so that the Result display makes sense to you. When you hit the Use button, Logic will create a 'master' MIDI object that has a note on each quantise value — the name of this is based on that of the audio file from which it was generated. This acts as the master for any subsequent quantising.

At the same time, Logic places a Groove Template with the name of the audio file in the quantisation menus of all relevant windows. 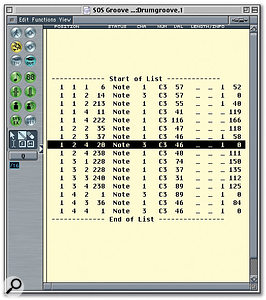 The Audio To MIDI Groove Template process creates a master MIDI sequence object, to which other MIDI performances can be quantised. This can be edited at any later date from a MIDI editor (such as the Event List shown here) if you want to fine-tune the Template once your Song is playing back.

The template will probably need to be adjusted to become usable with the audio it was generated from. To do this program up a MIDI track to run alongside the audio and quantise it to the Groove Template.

Now you can adjust the quantisation grid by moving the positions of the MIDI events in the Groove Template's master MIDI sequence object using the Event List window, fine-tuning the position of each sub-beat. You can hear the result in real time, so just trust your ears. In conjunction with the quantise percentage function in the MIDI object's Extended Parameters, it is possible to achieve some very live-sounding results.

The other option for synchronising your sequences to a live audio take — creating a tempo map — is a straightforward enough procedure, but can be extremely laborious if you don't know what you're doing. Next month I'll be showing you how to go about it in the most efficient way.