The days are getting longer and Spring is definitely springing, but with so many exciting product announcements recently - including Digital Performer 6 - DP users might well feel like it's Christmas all over again. 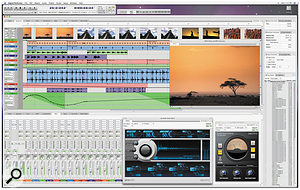 As this pre-release screenshot shows, DP6's user interface, brighter and lighter than in previous versions, does away with non-standard or redundant features like the window title-bar buttons and the Control Panel's editing window buttons. Despite the changes, experienced users should feel completely at home.If you saw last month's NAMM round-up in Sound On Sound, or you follow any of the DP-based online discussion forums, you can't fail to have noticed the news about DP6, the latest version of Digital Performer. MOTU had given nothing away prior to the NAMM show, and certainly nothing to suggest the scale of the update that DP6 appears to represent.

According to a January press release from MOTU, these are the main features of DP6:

In a word, wow! DP6 appears to directly address the weaker areas of previous versions without trying to reinvent the wheel, as it were. The lack of a good bundled reverb and compressor plug-in had always been unfortunate, but the new ones seem to make up for that and then some. Decent track comping couldn't have come a moment too soon (especially since I'd tried and failed about three times to write a good Performer workshop article about best practice in DP5 and previous versions!). The enhanced audio file support and CD burning is something that everyone will benefit from, and it's great to see the Virus TI supported in DP at last, especially as similar hardware/software tie-ins seem to be all the rage these days. However, for me (and many other users, I suspect) the two real 'biggies' in DP6 are instrument pre-rendering and the user interface changes.

In recent weeks and months, Audio Ease have been busy posting updates to their DP-friendly plug-ins and bundles. Altiverb is updated to version 6.1.1 and offers a Leopard-compatible installer, amongst other fixes. The Rocket Science bundle goes to version 3.5.2 and gets similar improvements, while the Nautilus 2.5.2 bundle has a number of improvements to the great granular synthesis plug-in, Riverrun. You can now drag soundbites to its waveform view rather than having to 'sample' them live every time, and the waveform buffer is now saved along with a DP project. 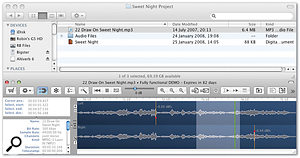 Also, Audio Ease have finally released their 59 Euro audio file-browsing helper application, Snapper. It's an application that runs in the background and only pops up a window when you select an audio file in a Mac Finder window (or in iTunes). Then it displays the waveform for the file, along with an indication of peak-level values in each channel, and allows you to preview the audio with a simple tap of the space bar. However, some little (and very handy) editing facilities are also included: after dragging over part of the waveform you can export the selection in a variety of file formats, create a new Mail message with the audio attached as an MP3, or drag it to the desktop or another Finder window. As yet, some additional facilities afforded to Pro Tools users — pasting selections at the playback cursor or into the region bin — aren't implemented for DP or any other DAW, but I hope at some point that we might at least be able to drag audio selections from Snapper to audio tracks in DP directly. So Snapper certainly has a very streamlined feature set, but it's very nicely implemented and I've found myself using it a lot already. It will inevitably be compared with AudioFinder ($69.95 from www.icedaudio.com). Both applications integrate with OS X in a similar way, to preview audio files, but AudioFinder goes much further, functioning as a full-blown audio editor and sound-management application. (I should also point out that it does allow Finder audio selections to be dragged straight to DP.) Still, there's room for both in the market; AudioFinder wins in flexibility and power, whilst Snapper's strength lies in phenomenal ease of use and simplicity of purpose. As both are available as functional demos there's no excuse not to check them out in practice. Visit www.audioease.com and www.icedaudio.com and see how you get on.

The Host With The Most?

Looking first at instrument hosting, it's true that in some circles DP4 and DP5 had acquired a reputation as being inefficient virtual instrument hosts — although in reality only Logic 7 could be demonstrated to be noticeably more efficient, and even then not by that much. While none of us have seen it in action yet, of course, DP6's instrument pre-rendering might just silence those DP detractors for ever. The idea is simple: DP6 does the maths associated with playing MIDI tracks from virtual instruments when it has processor cycles to spare, and during playback regurgitates the audio it has already worked out, rather than running the instrument in real time. The implications of this system, if it works well, are massive. You could load up heavyweight synths — the likes of Arturia's emulations and Rob Papen's modern classics — and run your Mac within an inch of its life while you actually jam and then record with them. But after the MIDI track is in place, processor hit during playback would fall to a level much more in keeping with the playback of a simple audio track. You could run dozens of synths, even on an older Mac, possibly making distributed processing or outsourcing of instrument hosting completely unnecessary. If this turns out to be the case, a lot of people will be very happy indeed.

Turning now to DP6's user interface, I feel MOTU were bang-on in deciding to do a redesign at this point in time. The interface quirks of previous versions, including their unusual title-bar buttons and mini-menus, were non-standard in the days of Mac OS 8, and to press on with them in the era of Leopard — and a climate in which the vast majority of applications are conforming to OS X's bright, clear and functional design — would surely have represented obstinacy bordering on commercial suicide. Consequently, DP6 looks to be a much brighter place to hang out, and has shaken off the quirky elements and the predominantly grey theme, while retaining the 'feel' and all the key features of previous versions. The zoomable Tracks Overview is just the tip of the iceberg, and there are many more important changes, at least judging by the pre-release version that was demo'd at the NAMM show. The Control Panel is completely redesigned and has lost the rather redundant pop-out panels, but has gained far better time-position displays, along with a permanently visible indication of recording sample-rate and bit-depth. The Mixing Board is noticeably more 21st century, and appears to show track input and output assignment much more prominently. Window title-bars now contain nothing but OS X's standard 'traffic lights' — and at this stage we can only guess where the mini-menu and title-bar button functionality has gone instead. The Track Selector list has been 'unified', so there's now only one, which updates as you switch between different editing windows. Consolidated Window cells can now have tabs, allowing multiple windows to be active at any time and selected with a single click. There are brand new 'Inspector palettes', which can live in the Consolidated Window or float separately above other windows, displaying Event, Snap, Cursor and Selection information that continuously updates as you work. There's also live window resizing — a small but significant extra enhancement that should help with various kinds of editing. Ultimately, DP6 looks 10 years younger than its predecessor, and should be a really nice environment to work in.

DP6 is due to be released in 'Q1, 2008', so as you read this it'll either have just come out or will be along shortly. MOTU are not bowing to the pressure of Logic pricing: DP6's list price is $795, which should end up being the same $500 or £350 that DP5 currently typically sells for. As I write this, upgrade prices have not been set. For all the latest info, check out www.motu.com. As soon as I get my hands on a copy, rest assured that we'll be covering all the new features in detail.

For some reason, MOTU left it until after the NAMM show to announce this one, but the 828 Mk3 is on the way, at a list price of $795. It's a souped-up version of the existing 828 Mk2, with the key additions being 16-channel ADAT optical interfacing (both in and out), digitally controlled analogue gains with 73dB of gain available, hardware limiters on the front-panel mic/guitar inputs, and a couple of guitarist-friendly send/return loops. 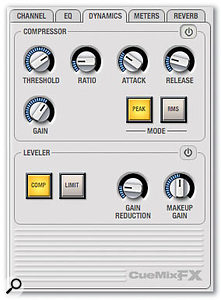 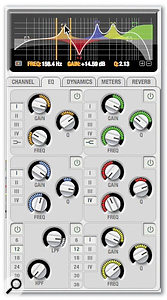 There are less obvious enhancements too, that could really make a difference to some users. Two headphone outputs are fitted, and the main volume knob can be programmed to simultaneously control all the outputs involved in a 5.1 or 7.1 surround mix, as well as conventional stereo. This, of course, would negate the need for an expensive outboard surround volume control.

The biggest change of all — at least, compared to every previous interface MOTU have made — is under the hood, in the form of an improved CueMix near-zero-latency mixing architecture. The new system is called CueMix FX and — you've guessed it — includes DSP-driven hardware effects. While mixes can be set up and adjusted from the front-panel knobs, the Windows or Mac CueMix FX application makes working with them a much easier and more visually-oriented proposition. Three effects are on offer: Classic Reverb, a seven-band parametric EQ, and Vintage Compression. Apparently there's enough DSP 'oomph' to support at least one band of EQ and compression on every single input and output (58 channels) simultaneously, but the likelihood, of course, is that you'd apply DSP to far fewer channels at a time, and thereby be able to use more bands of EQ. Compared to all that EQ and compression there's just the one reverb, but it can be accessed with sends from every input, output or mix bus.

Since these effects are strictly bound to the interface itself — you can't run them as plug-ins inside DP, for example — how much use are they? Well, the reverb is seriously useful for providing musicians, especially singers, with reverb on their headphone monitor signal as they record. The EQ and compression are much less useful for monitoring purposes, but since you can record with them, 'wet', into your DAW, they'll allow you to treat your 828 Mk3 much more like a dedicated outboard channel-strip. This could suit some people's way of working very well, allowing them to zero in on the sound they're after during the actual recording stage, rather than later, at the mixing stage.

The new CueMix FX application designed for the MOTU 828 Mk3 interface is significantly nicer-looking and more configurable than the current CueMix Console. Owners of older CueMix-equipped interfaces should eventually be able to use it with their hardware.The effects themselves look quite capable. The reverb has five different room types and plenty of other bells and whistles, while the EQ is, predictably, modelled after the 'British EQ' sound, and seems to have facilities extremely similar to DP's MasterWorks EQ. The dynamics section actually consists of a conventional single-band compressor switchable between Peak and RMS operation, plus a leveller/limiter based on the LA2A.

Owners of existing MOTU CueMix-enabled interfaces will inevitably be clamouring for the attractive CueMix FX console to support their audio hardware. The word from MOTU is that this will indeed eventually happen, but possibly some time after the 828 Mk3 is released. Also — and I'd be happy to be proved wrong on this — I imagine it's almost certain that existing interfaces will not be able to support DSP effects, and will instead just benefit from being driven by the improved CueMix FX environment, while also possibly acquiring a few new facilities such as bus master faders. We'll have to wait and see...