Happy Birthday Vista: How Was It For You?

Vista's now a year old - but is it loved or loathed by musicians?

As I write this in early February 2008, Microsoft's Windows Vista operating system has been out for a year, and to say it has met with a mixed reception would be a bit of an understatement. Most Vista users are pleased with its look and feel and there are now quite a few musicians using it successfully. However, a significant proportion of users have been disappointed by aspects of its performance compared with Windows XP, and some have taken the unprecedented step of uninstalling Vista and returning to XP. You can even find web sites dedicated to such tasks, with names like www.ihatevista.co.uk and www.removevista.com.

For musicians, Vista's new and potentially low-latency WaveRT architecture has suffered from a Catch 22 situation: few audio application developers have yet added the required support for it — after all, ASIO already performs extremely well — and almost no professional audio interface manufacturers have written any WaveRT drivers that could take advantage of such support (partly because WaveRT is only currently compatible with PCI devices, and is not applicable to either USB or Firewire audio interfaces). One exception is Echo, who released Vista-only WaveRT drivers for their Echo 24, Indigo and 3G families in November 2007.

Meanwhile, the MMCSS (MultiMedia Class Scheduler Service), hailed as a way to permanently banish audio clicks and pops under Vista, by enabling audio-processing threads to be given a higher priority than other active threads, seems to have fallen at the first fence. Reports from developers who have included MMCSS code in their audio applications are that other, higher priority, Vista tasks like Aero graphics can still interrupt audio. Those interested in using their audio interfaces with a latency of 3ms or less can still run significantly more plug-ins and software synth parts under Windows XP, making the potential benefits of MMCSS a little academic (see, for instance, www.dawbench.com/blofelds-xp-v-vista.htm).

On the positive side, concerns about Vista DRM (Digital Rights Management) code degrading video and audio quality haven't materialised, as DRM only applies to media files being played back by the default Windows audio device, and not when using ASIO drivers. Moreover, while several developers did report issues with increased Vista timing jitter during MIDI recording and playback, this issue has already been resolved by the imminent Service Pack 1 update.

Which Way To Go?

On-line debates are still in full flow, although many of those offering positive Vista feedback have bought Vista pre-installed on a new and more powerful PC than their previous one, while those who have upgraded from XP to Vista on the same machine tend to weigh up the pros and cons in more depth, especially since XP often lets you run more plug-ins and soft synths. After all, installing a new OS is an investment in money and effort, and most people expect new features and better performance. 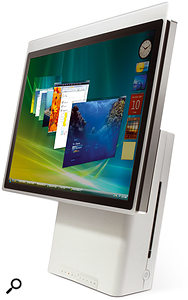 Unlike most home users, whose applications are perfectly happy running with 2GB of system RAM, the largest carrot for musicians with Windows Vista is still the 64-bit versions and their ability to support up to 16GB of RAM (Home Premium 64-bit), or a massive 128GB given a suitable specialist motherboard and Vista Ultimate 64-bit. This can be liberating to anyone currently struggling to load huge sample libraries, so it's hardly surprising that film composers tend to be early Vista converts. As more native 64-bit versions of audio applications are released, Vista 64-bit is also starting to show some performance benefits over Windows XP 32-bit (see Robin Vincent's new set of Vista performance tests with Cubase 4.1 at http://rainrecording.co.uk/ vista/performance).

Overall, musicians more interested in making music than having the new Aero look are sticking with Windows XP for the time being, while those in search of potentially better long-term performance, plus massive sample-loading capability, are bypassing Vista 32-bit in favour of Vista 64-bit (especially now that audio developers are quietly dropping support for Windows XP Professional x64 in favour of Vista, making the latter the only real 64-bit option).

If you have 4GB or more of RAM and decide to go Vista 64-bit, do your research first, as you'll need Vista 64-bit drivers for all your computer hardware (you won't be able to use any that don't have drivers, and while most audio interfaces now have Vista drivers, some are still 32-bit-only Beta versions with no performance guarantees). To reap the full benefits of 64-bit you'll also need a native 64-bit sequencer application and a set of 64-bit plug-ins — although if your host application features some sort of 'bit bridge' you'll also be able to run 32-bit plug-ins with reduced performance.

Beware legacy applications that don't install under Vista at all, plus any that are not UAC (User Account Control) compliant (easier said than done). It's really only when its developer declares an application Vista compatible or releases a Vista-compatible update that you can be reasonably sure it's reached mission-ready status. 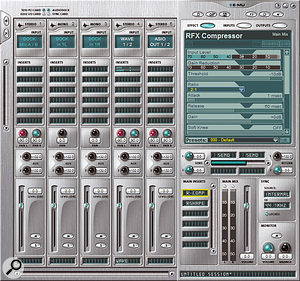 Emu's new v2.0 PatchmixDSP utility features new stereo mic channel and mono line channel-strip options, plus four new DSP plug-ins, including the RFX compressor shown here. Emu have released the long-awaited version 2.0 of their drivers and PatchMix DSP application for their PCI and CardBus products (0404 PCI, 1212M, 1820, 1820M, 1616 and 1616M). These driver updates (from www.emu.com/support/welcome.asp?rd=download) add Windows Vista compatibility and cure various bugs, but also provide various new features. Input strips can now be mono or stereo, so (for instance) the two mic inputs of the 1820M can finally now be configured as a stereo strip, while stereo pair line inputs can be configured as mono channels.

There are also four new DSP plug-ins on offer: the RFX compressor offers side-chaining and variable soft-knee options, the ReShaper controls envelope dynamics, and there's a new Multimode EQ and Gate. Updates for the USB 2.0 products (0202 USB, 0404 USB, and the new Tracker Pre) will apparently be released very soon as well.

A few issues ago, in PC Notes January 2008, I discussed a couple of utilities that let you perform double-blind audio tests, to help you establish (for instance) whether you really can hear any difference between the mixing algorithms of one sequencer compared with another, or whether an expensive commercial plug-in sounds better than a freeware one, without being swayed by a more sophisticated graphic interface or the fact that you've just laid out a lot of money. 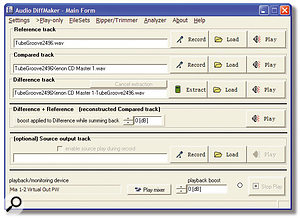 How is that limiter plug-in changing your audio? Find out with Audio Diffmaker's sophisticated extraction process.Since then, I've discovered another freeware PC utility that helps you evaluate audible differences using a rather different approach. Audio Diffmaker from audio measurement and analysis software developers Liberty Instruments Inc (www.libinst.com) essentially lets you subtract one audio file from another, so you only hear the differences between them, and it was primarily written to investigate possible audible differences due to modifications or 'tweaks' to audio setups, such as swapping bog-standard interconnect, speaker or mains cables for more exotic audiophile versions, upgrading electronic components such as resistors, capacitors and op-amps, or any of the more bizarre activities indulged in by hi-fi fanatics (such as deep freezing of audio CDs or writing on them with green pens!).

Audio Diffmaker can just as easily be pressed into service for comparing sequencers, plug-ins and any other PC audio software you care to test. Unlike ABX double-blind testing, the emphasis with Audio Diffmaker is not on whether you can reliably hear the difference between two audio files, but whether there actually is any audible difference.

Audio Diffmaker features a convenient interface offering tools to record before/after audio files at up to 24-bit/192kHz, and then let you switch easily in real time between playback of the Reference track, Compared (tweaked) track and the difference between them, plus reconstructed 'Reference+Difference' track with variable gain for the difference component; with 0dB gain the result is identical to the Compared track, but as you change the gain you can exaggerate or reduce the difference component, to make the changes more or less obvious.

The Ripper/Trimmer tool lets you extract audio snippets from audio CDs to make suitable test signals, while the spectrum analyser and pink-noise source facilitate measurement of differences in frequency response. You can also package related sets of audio files, along with text descriptions, into a single, losslessly compressed FileSet. The Liberty Instruments web site allows you to download some interesting examples, including the effects of different series of capacitors, makes and model of op-amp, and the infamous CD green-pen test!

Can You Hear The Difference?

To use the software, all you do is record or load in 'Reference' and 'Compared' files, in WAV format, then click on the Extract button to start a complex process lasting some seconds, that adjusts the gain and time alignment of the Compared track to best match the Reference track, before subtracting the Reference track from the Compared one to generate the Difference track.

Audio editor packages such as Wavelab already offer 'audio file comparer' functions that simply subtract one file from another. This is handy for checking that two files are identical (to see if S/PDIF I/O is bit-transparent, for instance, or that the bypass button on a plug-in really does what it claims), but Audio Diffmaker's Extract function is far more sophisticated. When evaluating analogue gear it can also compensate for tiny audio-interface sample-rate drift between the 'before' and 'after' recordings, or gain changes due to different cables or gear warm-up, so you only hear more subtle modifications. Still, for best results you should warm up analogue gear for several hours before starting test runs.

Since downloading Audio Diffmaker, I've found it a very educational tool for evaluating the effects of compressor/limiter, enhancer and tube/tape plug-ins, finding out how much active and passive monitor controllers change the audio passing through them, and discovering what audio magic (if any) analogue gear is actually performing. Moreover, if you've ever been tempted to buy expensive audio cables, a quick A/B test with some cheapies should establish whether or not they are worth the money! Highly recommended.