An old favourite utility returns this month, and Digital Performer 4.1 learns something from Cubase SX — on the PC! Surely not...

Nine months since I first wrote about using Digital Performer under OS X, it's clear that the transition from OS 9 has often been an incredibly frustrating process, with users being forced to learn new approaches and techniques (sometimes the hard way) and wave goodbye to old favourites that were once lynchpins of a 'classic' DP system. So it's very nice to see the return of an OS 9 stalwart in the form of Audioease's VST Wrapper 4, which should be available from www.audioease.com by the time you read this. What's more, it has so many similarities to VST Wrapper 3 from OS 9 days that every now and then you might find yourself doing a double take, before remembering that this whole OS X and DP 4 malarkey hasn't been just a bad dream after all... 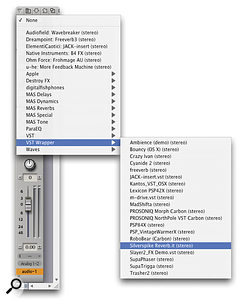 VST plug-ins hosted by VST Wrapper 4 show up in a dedicated sub-menu in Mixing Board insert slot menus. Additional VST plug-ins converted with FXpansion's VST to AU Adapter appear in the 'VST' sub-menu, and don't conflict with VST Wrapper.VST Wrapper 4 is a MAS plug-in that is aware of the contents of both your 'global' and 'user' VST folders — see Performer Notes from December 2003 for more on the location of these. When you boot DP 4, VST Wrapper throws up a little splash screen of its own as it scans any VST plug-ins you have, and then these become accessible from Mixing Board insert slots, along with the rest of your MAS and Audio Unit plug-ins.

Instantiating a VST plug-in causes its user interface (if it has one) to be displayed, along with a VST Wrapper title bar which carries a couple of menus for selecting, loading and saving VST banks and presets. Plugs with no graphical user interface have their parameters controlled by a very functional, though quirkily non-standard, 'generic' interface. VST Wrapper can handle VST instruments as well as audio plug-ins, and makes provision for parameter automation as well as passing tempo information from DP to plug-ins that need it — beat-based delays, for example.

What's lovely about VST Wrapper 4 is its transparency — you just install your VST plug-ins, boot up DP and you're away. It feels very straightforward and non-intrusive, and requires no conversion process, unlike FXpansion's VST to AU Adapter, which takes an altogether different approach to crack the same nut. To be fair to FXpansion, though, their Adapter has some unarguable advantages, not least of which is the fact that the 'adapted' VST plug-ins it creates can be used by all AU-compatible software you happen to have on your Mac, not just DP. VST Wrapper 4 also relies on a user-configurable option — 'Use separate window' to cope with VST plug-ins whose non-standard graphical user interfaces cause graphics redraw problems. These include most of Prosoniq's plug-ins, as well as some by Antares. FXpansion's Adapter copes with this sort of thing by itself, though it has its own set of user-configurable options designed to improve compatibility and stability.

So which is the best choice? The truth is that there's no clear winner in the battle of the DP VST hosts, and it could be argued that 'power users' would want to own both, to give the broadest possible VST support. Using VST to AU Adapter and VST Wrapper simultaneously does require a little bit of planning, though, or you end up with VST and 'adapted AU' versions of the same plug-ins in DP, and huge potential for confusion! The way around this is to probably to put any VST plug-ins you want the Adapter to handle in their own VstPlugIns folder, in 'Applications/VST to AU Adapter ' and then use the 'Scan only local Vstplugins' option in the VstAuConfigure application. That leaves VST Wrapper to work with the plug-ins in your 'system' VST folders.

Plug-ins currently causing problems with VST Wrapper include Linplug's FreeAlpha (although this reportedly has other compatibility problems), nearly all of Native Instruments' VST-format plugs, Virtual Guitarist original edition, and some of the synths by reFX. Other 'big' plug-ins, such as Halion, might also be problematic, but in general the compatibility of VST Wrapper 4 is remarkable, and it works superbly with virtually everything else by Arturia, Linplug, MDA, Prosoniq, PSP, Silverspike, Steinberg and Waldorf. It's also the only way, as yet, to make soft synths by Muon Software (www.muon-software.com) work in DP. These include the must-have bargainware Tau2 and M-Drive, plus the excellent $35 Tau Pro, which remains one of my favourite software monosynths.

This month I've been doing a lot of MIDI editing, both in DP 4.1, and, yes, I'll admit it, Cubase SX — on a PC! I know, I shouldn't have, but I had no choice... While it'd be DP every time in that desert island studio, I was rather taken with a small but crucial feature of SX, DP's lack of which I'd never noticed until now.

When the grid is toggled 'off', you can move the MIDI event or Soundbite anywhere you like in time, but when the grid is on, the smallest move you can make is exactly equal to the setting in the pop-up menu. That seems perfectly intuitive, but DP's approach is to maintain the position of the moved event relative to its original location. So if the event was originally somewhere between two beats, after the move it'll end up still between two beats, albeit a different two beats.

The Event Info bar, which appears in the top left of the Graphic and Sequence Editors. You can click on any of the fields to enter a new value directly. Cubase SX handles things differently. When its equivalent of the Edit Grid is turned on, moving a MIDI event causes that event to 'snap' absolutely, not relatively, to the grid, causing the event to be both moved and quantised, as it were. Maybe it was because of what I was working on, but this struck me as a better approach to editing for the majority of tasks, and especially for dragging Soundbites around into rhythmic patterns. It is, then, quite bizarre to learn that DP, in its current incarnation, just can't be persuaded to reproduce this behaviour. There are three ways to do something similar, but they're all a bit fiddly.

The first is to select the event and hit Apple-0 (zero) to call up the Quantize window, quickly select an appropriate resolution, then hit Return to apply the operation. This at least gets the event bang on some meaningful division of the beat, as does selecting an event and directly typing in a new location for it in the graphic editor's Event Info bar. You can also just drag the event, with the Edit Grid toggled off, and release it when the location in the info bar shows it to be on a simple sub-division of the beat, but this really can be fiddly, depending on the current level of zoom. But with an event on the beat you can at least begin to drag it with the Edit Grid toggled on.

Now, the signs are that MOTU might provide a true 'snap to grid' function, like Cubase's, to augment its current behaviour before too much longer. But in the meantime there are some 'power-user' shortcuts that are worth learning to make MIDI and Soundbite editing that bit easier.