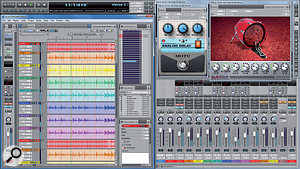 No, your eyes are not deceiving you — this is DP running in Windows 7. The new cross-platform version 8 is a true 64-bit application and includes new plug-ins like Subkick, a specialised kick drum and bass plug-in which emulates the old studio trick of using a small speaker as a mic.

MOTU usually show some interesting stuff at the winter NAMM show, but what came out from under wraps this year was quite unexpected. If you haven't heard the news yet, the latest version of Digital Performer, DP8, is being released for Mac OS and Windows 7. Yes, it's true — DP is going cross-platform.

First, a few facts. With a 'Spring 2012' release date, DP8 might already be out by the time you read this. Mac and PC installers will be provided on the same installation disk, and the new application will support 64-bit and 32-bit operation (more of that in a minute). There's plenty we don't know at the moment, though, such as the purchase and upgrade costs, and whether it'll continue to support pre-Intel Macs and older operating systems.

As for new features, DP8 includes a few. There's an enhancement to Auto-Record (punch-in) recording behaviour, which MOTU terms Punch Guard. Now additional audio is recorded both before and after the punch-in and punch-out locations you specify. That's pretty nice, and means that you can define the Auto-Record region really accurately, while retaining lots of flexibility with subsequent edge-editing of the soundbite it creates. Also of general interest will be 15 new plug-ins. These include a multi-band dynamic EQ (in the vein of classics like Waves' C4), a dedicated de-esser, a modelled spring reverb, a specialised kick-drum enhancer, and a clutch of extra guitar amps and pedals. There's a new video playback engine that allows full-screen replay of high-definition video formats, and direct output to some of MOTU's video hardware boxes. Finally, DP8 ups the number of included appearance themes.

So that's the news: now for the analysis. I think it's safe to say that DP8's shift into the world of Windows must, above all, be a response to the fearsome competition posed by Apple's Mac-only Logic 9, which for some time has been aggressively undercutting DP and is conveniently distributed via the OS X App Store. DP8 is now aligned much more with other serious cross-platform DAWs (such as Pro Tools, Cubase and Studio One), which also don't try to match Logic's price point. It could work out really well for MOTU, who already have a significant Windows user base, thanks to their audio interface and virtual instrument sales, and it probably represents the only way DP can survive as a viable product in the long term. But I'm not sure DP8 is quite the update that many existing Mac-based users of DP7 were looking for. The 64-bit compatibility is, of course, the biggie — an essential step, given the evolution of modern operating systems, and, for users with lots of RAM who are running large sample libraries, a godsend. But while the other enhancements are useful, some users mightn't think they justify a whole-point update, and the inevitable cost that goes with it. More universally useful, perhaps, would have been some intuitive, flexible audio capabilities, and real-time time-stretch playback. DP notably lags behind the opposition in these areas, and its existing time-stretch algorithm is some way from the cutting edge. Time will tell, though, how DP8 is received, and whether MOTU spring any last-minute surprises on us. Whatever happens, you can rest assured I'll be digging into the new features in future columns. Oh, and if you're a Windows user reading this column for the first time — pleased to meet you!

DP offers some great time-saving user interface features that come into their own when you're working with projects that have lots of tracks. If you've never tried some of the following techniques — and you'd be forgiven for that, as they're not all obvious — they could prove to be real time-savers. 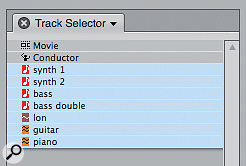 The little button that opens and closes DP's Track Selector is to be found at the bottom of many editing windows, and the Mixing Board.

The Track Selector is a fundamental part of DP's graphical interface. Many editing windows include a little button that opens it, and it then appears in a sidebar cell, or gets directly attached to the left side of popped-out editing windows and the Mixing Board. You can also open it with the Shift-Command-T keystroke.

The whole point of the Track Selector is to hide and show tracks, helping keep your workspace clear and focused. You just have to click track names in the list to show or hide them — very intuitive.

But here's something you might not have tried. You can 'swipe' over Track Selector lists, essentially clicking one track and dragging over many others, up or down. In one swift stroke, you can hide or show many tracks. And you can also use modifier keys to do some other smart stuff. Try Alt-clicking a track in a Selector List. You're instantly left with just that one, to which you can easily add selected others in the normal way. If you click with the Command key held down, you get the opposite: every track except the one you click is shown. This, then, is part of a really quick way to show all tracks, no matter what combination are shown or hidden. Command-click any track, then click it (without the Command key) immediately again.

Very similar behaviour applies to other parts of DP's interface. In the Mixing Board, you can click individual Mute, Solo, Monitor, Record and automation buttons, but you can also click and swipe over them too. You don't even have to be particularly accurate — just click one and drag anywhere over channels/tracks to the right or left to toggle the status of a bunch of them. Modifier keys work here, too: Alt-clicking a Solo button (for example) is a really nice way just to end up with one track soloed when you have a bunch of them in that state.

Feel free to use the same swiping and modifier key techniques in editing windows such as the Tracks window and Sequence editor. You won't find mute and solo buttons, of course, but instead you get Pslay-enable indicators, which can achieve much the same thing. Record- and Monitor-enable buttons also respond to the same treatment.

Pressing the numeric keypad '6' key during playback makes DP play at half-speed — including audio tracks. Yes, they'll also play back an octave lower, but this is absolutely brilliant for listening in great detail prior to editing, or for transcribing material. If you haven't got a keypad, you can use the Slow Forward button in the Control Panel (transport strip) or set up a new keystroke in the Commands window. Open that with Shift-L, and then search for 'slow forward'.

To clear level-meter clipping indicators globally in DP — in the mixer, editor windows, and in plug-ins — just hit Command-\ (backslash).

Many of the biggest plug-in developers out there go to great trouble to ensure their products work well with DP.

Altiverb 7.Audioease's convolution reverb, Altiverb, has long been a favourite of many DP users. It's always been supplied in the native MAS format for Mac OS, and works great in DP, with good support for automation parameters. The latest version, Altiverb 7, gets a radical redesign, making the plug-in simpler to use and understand, and includes some great user-interface features. For example, the Impulse Response browser is now clearer and more attractive than ever, putting informative pictures of acoustic spaces or gear up-front. It includes a search feature, and also a 'similar' button for instantly calling up alternative IRs with a similar character or decay time. A new 'Bright' knob adds an algorithmic reverb signal tailored to the characteristics of the Impulse Response, and is there primarily to add high-frequency 'sparkle' content to IRs that lack it. But despite all the new stuff, Altiverb 7 retains compatibility with version 6, to the extent that it automatically opens in place of the old version, loads its settings, and sounds identical. Nice work!

Despite some of their plug-ins being seriously long in the tooth now, Waves tools are still essential weapons in the armoury of many DP users. Recent offerings like the V-Series and the various CLA plug-ins are at the cutting edge of processing design, while plug-ins such as Vocal Rider and Bass Rider are genuinely innovative, immensely useful, and have few direct competitors. With V9, announced at the 2012 Winter NAMM show, Waves plug-ins and bundles are now 64-bit compatible and no longer require iLok authorisation to run (though that's still an option for users who like the system). Now you can opt for dongle-free hard-disk or online 'cloud' authorisation, or place your licences on any old USB stick. That could be a major boon for DP users working in live or location situations, who want to ditch their dongle baggage, and for educational establishments, where dongles often get nicked. As is customary with these whole-point updates, too, most of the major plug-in bundles incorporate some extra plug-ins, to sweeten the upgrade pill still further.