Straight and vintage delays, ADT, psychedelia, glitch... Is there anything Reason's Echo device can't do? 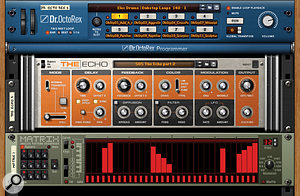 1: Movements of the Roll slider can be precisely and rhythmically automated with the Matrix Pattern Sequencer.

Last month, we started a thorough investigation of The Echo, one of the new devices introduced in Reason 6, and looked at using it for a range of bread-and-butter delay effects. If they were all this great-sounding new device could do, it'd be pretty good... but, as we'll see this month, it's capable of a whole lot more besides.

The Echo includes a couple of on-board modulators (in addition to the Wobble feature we looked at last month) which are invaluable for setting up both useful and creative effects. One of those is Automatic Double Tracking (ADT), the very useful treatment that makes it sound as if a single vocal take was tracked more than once, with tiny variations in pitch and timing between the takes.

To get started with this, add The Echo to a vocal audio track, then right-click it and choose Initialise Patch, so that you're starting with a clean slate.

What we're going to do here is set up a short delay, and then use the on-board LFO to continually vary the delay time. Just as if we were slowing down and speeding up the tape in a tape-echo unit, the LFO introduces subtle pitch changes in the delay signal, and here helps to prevent the sound acquiring any sort of predictable, metallic quality. The effect is especially pronounced because The Echo's LFO (somewhat unexpectedly) works in opposite polarities on its two output channels. So try these starting points:

Interestingly, turning up Feedback at this point adds an artificial, metallic sheen which is really reminiscent of early, cheap hardware reverbs and some basic spring reverbs. If it's a sound that appeals, you can tweak it further by turning down the LFO amount again (to get rid of the weird pitch lurches) and enabling Diffusion, or the Filter, or both (to colour the effect).

2: The Echo's built-in LFO and envelope section are pivotal factors in some of its craziest effects!

Welcome to the outer reaches! Lurking above the LFO section is the single ENV knob, which is at zero in its 12 o'clock position. Moved away from that point, it causes individual 'echos' to either bend up or down in pitch, according to whether you turned the knob right or left, respectively. The result is at its most pronounced when you use short delay times (say 200ms or less), and plenty of feedback. Check out the factory preset 'Kraftwerk Drums', which uses the shortest (1ms) delay time available, and then bends all the echoes upwards — fabulous! From this starting point, it's pure sci-fi in every direction. Try raising the Delay Time and Feedback level a bit, and seeing what a negative value for the Env knob sounds like.

Special effects like these are so distinctive and pronounced that it's helpful to be able to apply them selectively. And that's where Roll mode comes in. We briefly looked at it last month, but to recap, it's a kind of 'freeze' feature that grabs a bit of your input signal and 'rolls' it, like a drum roll, while also excluding the input signal.

When you switch The Echo to Roll mode, it can sound initially as though you've bypassed the device. But what you're doing is making the Roll slider responsible for morphing between dry and effected signals (and some other things, in fact, like cranking up the Feedback). The whole point of this mode is to allow you to play the echo, bouncing the slider up and down like a DJ does with a crossfader, and adding delay effects briefly and temporarily.

Quite honestly, though, who wants to be using a mouse (or even worse, a trackpad) for such a tactile job? Not me, anyway. So luckily The Echo is designed in such a way that if you have a knobby controller keyboard available, you can tweak the Roll slider (and most other parameters) with a hardware fader or knob.

Setting it up is a simple two-step affair. Firstly, right-click on The Echo and choose 'Create Track for The Echo...' Secondly, in the sequencer, make sure the new track is selected — this channels data from your controller to The Echo. Now, turning your controller keyboard's modulation wheel controls the Roll slider. The mod wheel generates MIDI continuous controller (CC) #1 data, and the slider responds to it. You can record these movements, too; they appear in The Echo's sequencer track as automation data.

If you like the idea of playing The Echo in this way, and you have a programmable controller keyboard, here are some more useful default mappings for The Echo's parameters:

Still want more? Check out the MIDI Implementation Chart PDF that's installed along with Reason 6 for a mind-boggling run-down of all available MIDI controller mappings for Reason 6 devices.

Whenever you switch The Echo to Roll mode, remember one more thing: also turn the Dry/Wet knob all (or at least most) of the way to the right. Unless you do that, Roll mode treatments always sound a bit half-hearted, or won't do anything at all. 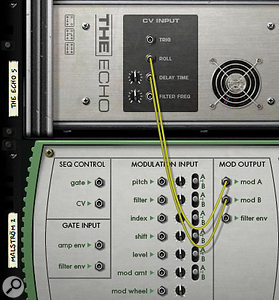 3: The Malström synth's sophisticated Mod LFOs are great for generating mayhem via The Echo's CV inputs.

Glitches, stutter-edits, call them what you like, but those clever little bits of sample-repeat ear candy can be very exciting to listen to, and show no signs of waning in popularity in pop music production. They've traditionally not been easy to achieve to Reason, other than by painstaking manipulation of samples performed with the mouse and razor tool, but The Echo opens up some new possibilities for achieving them automatically.

For this kind of treatment we rely mostly on three specific features in The Echo. The first is Roll mode. The second is the presence of rear-panel CV inputs, which allow more sophisticated external modulation sources to be used on The Echo's parameters. The third is the Delay section's Keep Pitch mode, which prevents any wild pitch-bends from occurring when the delay time is modulated but in doing so generates its own range of glitchy, loopy sounds.

Let's start with a great effect utilising the first two. Here, I've got a Dr OctoRex drum loop and I want to apply a stutter‑edit-style effect to tiny portions of it. I'm going to achieve that by creating the repeat effect with The Echo's roll mode, but then triggering it precisely with a Matrix Pattern Sequencer. Here are the main steps:

1. First, create an instance of The Echo for Dr OctoRex, switch to Roll mode and make sure the Wet/Dry mix is all the way up (wet).

2. Next, throw the Roll slider to the right (so that the effect is audible while The Echo is being set up), and dial in a fast-repeating, tempo‑sync'ed delay effect. A delay time such as 1/32, with some in-your-face drive, can be an interesting starting point. When you're happy with the general effect, set the Roll slider back to the left.

3. Create a Matrix sequencer and patch its Curve CV output to The Echo's Roll CV input, and make sure its front panel switch is set to 'Curve'. You might also juggle sequence length (the 'Steps' display) and resolution to match your loop. For example, 32 steps at 1/16 note resolution gives you a sequence of two bars.

4. Now, run your sequence, to trigger both the OctoRex loop and the Matrix sequencer. As it plays, experiment with drawing curves into the Matrix display. You don't need the pencil tool for this, by the way.

All sorts of curves work, depending on the loop or sound: abrupt full-scale peaks, beat-length maximums, slow up-slopes and down-slopes, and random shapes. You can switch (and automate) multiple Matrix sequences, to both vary the effect and turn it on and off. The Echo's Env knob can be useful here, as can the Ping-Pong option.

I'm going to leave you this month with one final suggestion for producing some interesting, glitchy results from The Echo: modulate both the Roll slider and delay time with another device's LFO. In screen 3, I've got a Malström's two Mod LFOs (always a good choice for interesting waveform shapes) patched into The Echo's CV inputs for Roll and Delay Time. Crucially, also, I've engaged the Keep Pitch option I mentioned earlier. Then it's a case of adjusting the Echo's delay-time knob, which determines what sort of sounds you're going to hear, along with the Malström's two Mod waveforms and their rates. Be ready for anything, but there are some sweet combos to be found!

A subtle but brilliant feature I couldn't quite squeeze into last month's column is the Ducking knob. When you turn this up, The Echo automatically ducks (ie. turns down in volume) the delay effect as the incoming dry signal gets stronger. It allows you to dial in really strong, obvious echo effects but then apply them to a vocal line (for example) without fear of swamping it. During vocal phrases, there's very little audible echo, but during any silences the effect is allowed to really ring out.