There is an adage that suggests that if digital data only exists in a single place then it can be considered not to exist at all. Less philosophically, if you don't have a backup of your projects and disaster strikes, all your hard work will have been for nothing. Logic Pro has a few inbuilt tools to help maintain reliable copies of a project, some of which can also be really useful if you need to exchange projects with others.

It's probably a good idea to first look at how Logic Pro stores its project data on the hard drive. Once you've named a project and selected Save from the main File menu, a folder is created that contains various sub-folders determined by which of the Assets are ticked on the Save dialogue box. These are:

Saving these last few Assets is optional. However, if you move a project to another computer, even if it has the same version of Logic Pro, you can't always guarantee that the same samples and impulse responses have been installed there. So if you want to make sure your backup has the best chance of loading in the future, it's wise to tick all these options as well.

The 'Copy movie files to project folder' Asset will, obviously, only be needed if you're composing to video. As any movie files in use are likely to be small compressed versions of the visuals, it's worth adding them to the project folder if you think you'll need to revisit the work.

If, on the other hand, all you want to do is save another version of a project, as an alternative mix perhaps, use File / Save As and deselect all the options — unless you want all the files to be duplicated in another set of folders! 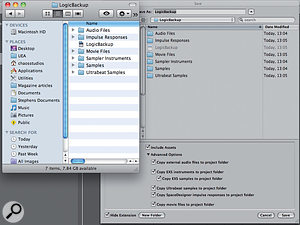 The Save dialogue box's Assets options determine what elements of your project are copied.

This whole folder can now be copied to your backup media. Personally, I like to use OS X's inbuilt compression facility to create a single archive file so files don't accidentally get lost, which also has the advantage of creating a smaller backup. You do this by Ctrl- or right-clicking on the folder in the Finder and selecting Compress. There are still a few reasons why you may want to create a smaller project folder even in the days of cheap terabyte storage. You may want to drop the project onto a DVD but find it's just a tad too big uncompressed, or you may live in a slow broadband area and want to share projects via the cloud.

It's sometimes worth compressing projects for smaller file sizes, especially when sharing via the cloud.

Logic Pro has a few more tricks up its sleeve if you want to reduce your project folder size. When you're creating your project, you'll probably have multiple takes, imported guide files and other audio you aren't actually using.

As I write, Apple's iCloud service isn't particularly useful for users of their Pro apps software, but there are third-party cloud services that are ideal for both backup and collaboration. I use Dropbox (www.dropbox.com), which is free for the first 2GB, but will cost you money for larger storage options. Dropbox works by creating a folder on your hard drive that is automatically synchronised to the cloud in the background. This means that you can record directly to the Dropbox folder and have a backup in the cloud created automatically, which can then be easily accessed from another computer. If you record audio to an external drive, you can move your Dropbox folder there by using the Advanced section of Dropbox's preferences. If you have a fast broadband connection, it is a pretty transparent way of making sure you always have an up-to-date clone of your work, and the Public folder facility means that you can readily share your projects with other people. Of course, there are other cloud options useful for Logic Pro users, such as Gobbler (www.gobbler.com), which is designed specifically with pro audio people in mind. Gobbler provides backup, FTP-sharing services and SoundCloud integration — again, at a cost. A warning though, cloud services can be removed at any time so you must make sure you also have a local backup in case this happens.

Of course, backing up your projects in any proprietary file format, including Logic's own, is only useful as long as something exists that can read that format. If you really want to make sure your projects will be readable in the future it's probably better not to assume that future versions of Logic Pro will be compatible with those in use today. The company have a track record here, as my box of early Logic files testifies: they are completely incompatible with Logic Pro 9 without being loaded into Logic 7 first. Likewise, Final Cut Pro 7 Projects cannot be loaded into Final Cut Pro X. Sometimes improving a product means a break with the past, and Apple aren't shy of cutting older users off from the latest technology. So, for the ultimate in future-proofing, it's better to reduce your completed projects to the lowest common denominator and save all your tracks as simple audio files, which also has the added advantage that it's the perfect format for sending to collaborators who aren't working in Logic Pro. To do this: 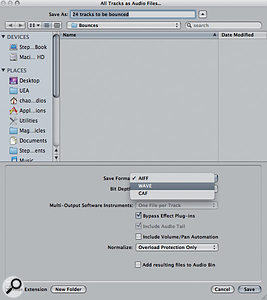 For maximum cross-platform compatibility, save the files in WAV format and at 24-bit if you've recorded them so. Files are named using the track names in Logic Pro, so make sure they all have useful names such as 'bass' and 'snare', and so on: there's no point in saving hundreds of files with the prefix of 'Audio'! Track files are stored, by default, in a folder called Bounces within the Project folder, but you'll probably want to select another location. Once all the files are saved, you can use Finder's Compress function to archive them and move them to a backup medium in the reasonably secure knowledge they'll be readable for years to come.