This month we wonder at Apple's lasting appeal, show you how to regain the Apple Loops utility, and eat our words...

Having witnessed my eldest offspring receive a Mac Pro for his birthday recently, it is clear that Apple's obsession with detail, right down to the packaging, still creates a rewarding consumer experience, some 30 years after Steve Jobs first bullied his engineers into ditching the hard drive from the first Macintosh in favour of coloured cardboard packaging!

And that's a good thing, as the death of Jobs has caused a disturbance in the reality distortion field and Apple need something to help them along to their next Mac release, which may be delayed due to Intel playing supply-and-demand games with its latest generation of processors. Rumours abound that Apple may be getting into bed with ARM (whose processor designs power iOS devices), and this leads me to my point. Raw processor speed appears to have plateau'd, and current Macs are now so powerful that the question needs to be asked: what exactly is it that you can't do with the Mac you already own? (Ignoring ThunderBolt on a MacPro, obviously!) How exactly a company can manage to create such demand where, strictly speaking, there shouldn't be any is still a cause of wonderment for this jaded hack, but I guess coloured cardboard may still be important!

Software continues to evolve, however, and recently we saw Logic Pro move to the download platform for a bargain price. It turns out that something not quite so obvious is missing from the download version, and that is the Apple Loops Utility. Strictly speaking, this was part of the SoundTrack Pro installation, so it's not been 'removed' from Logic Pro as such, but it does leave you with one less option for rolling your own Apple Loops. 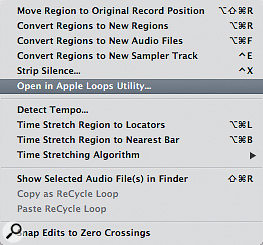 Owners of new Macs who download Logic Pro from the App Store will not have this option in the local Audio menu of the Arrange area.

You can still use the power of this utility by simply dragging and dropping the required region onto Logic Pro's loop browser. You do this with audio and software instrument regions and, after a bit of tagging, you have yourself an Apple Loop that can be accessed in all your Logic projects. Maybe that's why the Apple Loops Utility has been quietly dropped; regions 'loopised' with the ALU option don't get added automatically to the loops library (although you can easily do this by completing the steps above), and it only works on audio regions. But you do get under-the-hood access to the transient detection algorithm that ALU is using, and a degree of control over the metadata that is not available by using the drag-and-drop method. 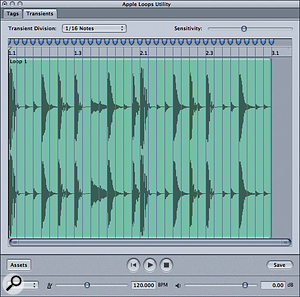 Following my piece in last month's Sound On Sound in which I raised doubts about the long-term viability of the music industry (or at least the part that sells music) as a result of the impact of iTunes Match (see the article at /sos/mar12/articles/apple-notes-0312.htm), I am happy to report a change of heart as a result of reports of real royalty streams being generated by iTunes Match. Think of it this way: if you rip a track from YouTube onto your computer and listen to it, no-one gets paid. If that track is in your iTunes library and gets 'matched' by iTunes Match, someone will get paid. Tunecore's blog (http://blog.tunecore.com) maintains that copyright holders will get paid each time a song is downloaded to your machine or streamed from iTunes. As long as you, or whoever is selling your music, has an arrangement with iTunes, you will receive revenue from iTunes Match users who listen to your music, wherever they sourced it from.

Quite literally as I am writing this, Apple have announced the developer preview of OS 10.8 Mountain Lion, prior to a suggested release date to the rest of us in 'summer' 2012. The new big cat seeks to bring the iOS experience to the Mac, and includes an updated version of iChat called Messages, Game Center for personalising your gaming experience on the Mac, and Notification Center — all already available on iOS devices. Twitter will be directly integrated into Safari, Quick Look, Photo Booth, Preview and third-party apps. Mountain Lion also introduces AirPlay Mirroring, which is an easy way to wirelessly send a secure 720p video stream of what's on your Mac to an HDTV using Apple TV, while iCloud Documents will push any changes to all your devices so documents are always up to date, and a new API will help developers make document-based apps work with iCloud. Thank goodness for that, as the current integration of iWork and iCloud is clunky, to say the least!