Mid/Sides (or M/S) recording techniques are favoured by many engineers for a number of reasons during the recording, mixing and mastering stages, and it's the last that we'll look at here. With some very simple maths, it's possible to encode standard left/right stereo mixes to M/S. You still have two channels, but instead of left and right, you now have control over the Mid (anything that's panned centrally) and the Sides (anything to the left or the right, lumped together). After independent processing or level balancing, the M/S signal can be decoded back to L/R. (See Hugh Robjohn's article at /sos/nov10/articles/stereoprocessing.htm for more technical details.)

Why bother? Well, M/S gives you a very different type of control during the mastering stage, because new opportunities emerge: you could EQ or compress wide-panned elements such as guitars or effects returns without affecting typically centrally panned elements such as kick, snare, bass or the lead vocal, for example. With this in mind, let's look at how you can gain access to the Mid and Sides elements using plug-ins in Reaper, and how you can process them.

M/S encoding and decoding is achieved by a combination of signal routing, mixing and polarity inversion. Fortunately, this rigmarole can be bypassed in Reaper, thanks to the inclusion of dedicated M/S encoding and decoding plug-ins called Kanaka MS Encoder 1 and Kanaka MS5. If you prefer, there are also several free plug-ins, including Voxengo's MSED (www.voxengo.com/product/msed), which I've used for the examples in this workshop. Here's how to get started:

The original mix is now being sent to all three tracks, and on from these to the main output. The next step is to configure the tracks for Mid/Sides processing. Click the 'FX' button on the Mid track and use the 'Add' button to select the Voxengo MSED plug-in. Once the MSED window appears, ensure that the mode is set to 'Inline' and click the 'Side Mute' button. Finally, add an instance of MSED to the Sides track, this time selecting 'Mid Mute' on the plug-in window. Screen 2 shows the plug-in configuration for the two tracks. 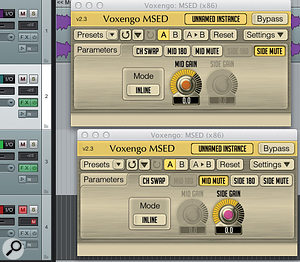 You now have the main mix separated into Mid and Sides elements. To verify that this has been successful, you can individually solo the Mid and Sides tracks. Audio examples 1 and 2 demonstrate the differences. The Mid sounds mono, full range and relatively dry. In contrast, the Sides sounds stereo, lacks centrally placed instruments, has a limited frequency response and is usually awash with effects.

The ability to rebalance the levels of the Mid and Sides components can be really useful. For example, when centrally located parts such as lead vocal and snare are being masked by wider-panned elements in a mix, a slight dip in the level of the Sides signal can help. Alternatively, you can reduce the apparent width of a mix where stereo 'enhancer' plug-ins have been used to the extent that a 'hole' develops in the centre; or widen the mix by boosting the Sides signal or attenuating the Mid, all the while avoiding problems with mono compatibility.

The mix being manipulated in the audio examples is slightly dry and has a relatively narrow stereo field, so an increase in Sides gain is more appropriate in this context. Screen 3 shows the Sides component being boosted by 3dB to enhance the stereo field and effects depth.

3. The Sides Gain is boosted on the MSED plug-in window to enhance stereo field and effects depth.Audio Examples 3 and 4 demonstrate this aurally.

Once you've started to modify the original mix, you can do an A/B comparison of the processed and original versions by toggling the solo button on the Unprocessed track.

The ability to equalise Mid and Sides components individually is perhaps the most powerful perk of M/S processing. EQ is typically applied during the mastering stage to emphasise certain details of instruments and to remove troublesome frequencies elsewhere in the range, and the M/S approach offers far greater control than L/R in a number of applications. One example would be the introduction of a shelving cut to reduce the brightness of side-located drum overheads without affecting instruments in the centre of the mix. Although any EQ could be used, such changes should ideally be applied with a linear-phase EQ, to maintain accurate directional information. Unfortunately, there's no linear-phase EQ bundled with Reaper stock plug-ins, so you'd need to look to third party plug-ins from the likes of DDMF and DMG Audio. I've used Reaper's ReaEQ here for demonstration purposes.

Screen 4 depicts EQ being applied to the Mid track. 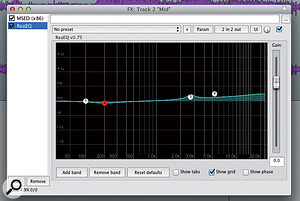 4. Equalisation is applied to the Mid track. This includes a high shelf, a high-mid presence peak and a slight scoop in the low-mid range. A high shelf is used to add definition to the lead vocal and a presence peak in the high-mid range helps to bring out the backing vocal part. Lower down, a gentle scoop in low-mid frequencies is used to thin out bulky guitar chords a little. For the Sides track, I placed a high-pass filter to remove some low-frequency energy. Audio example 5 demonstrates the post-equalisation mix.

Note that once gain boosts are applied, you may find yourself running out of headroom on individual tracks. To combat this, the level of the Source track can be reduced by 1-2dB, increasing headroom and maintaining the correct balance between Mid and Sides.

Acoustic depth can be modified to some extent by changing the volume of the Sides, as detailed above. Creating ambience in this way may not always be practical, though, as boosting the Sides signal might result in an overly wide mix, or in Mid elements becoming masked. An alternative approach that avoids these problems is to introduce a reverb mixed in at a low level. The key here is to experiment with a range of settings to find something that does not swamp the mix, and you may consider placing the reverb before EQ in the processing chain (to give you the ability to limit excess 'mud' or brightness introduced by the effect).

In this specific case, the lead vocal appears to be slightly on the dry side and sits too far forward, particularly in the verse. To remedy this, the Mid track was soloed and the ReaVerb plug-in inserted, with the wet signal mixed in at a suitably low level. A variety of impulse responses was auditioned before I settled on a plate reverb. The chosen impulse response is stereo and, as a result, the reverb reflections appear to the left and right of centre. To help confine the reverb to the centre, the 'Mix to mono' function was selected in the plug-in window. Audio examples 6 through to 8 demonstrate in stages how to do this.

The ability to apply dynamics processing to Mid and Sides components separately opens up a can of worms that goes well beyond the scope of an introductory tutorial! The various opportunities include applying different full band and multi-band compression to the Mid and Sides elements and/or global compression to the main mix bus once Mid and Sides are combined. Needless to say, the key tip here is to undertake careful and informed adjustments, referring back to the unprocessed mix at regular points for comparison, as well as making an assessment of how much compression was used on the mix before it reached your hands.

In the context of the example mix, low-ratio compression was used on the Mid track to slightly reduce the vocal parts that were jumping out of the mix in the verse. Approximately 1-2 dB of gain reduction was applied to peaks, plus a proportionate amount of make-up gain at the output stage.

The ability to split any finished mix into Mid and Sides components offers further possibilities that extend beyond small adjustments made at the mastering stage.

A tried and tested mixing technique is to compare work being mixed to a 'benchmark' reference track of a similar genre that exhibits admirable production qualities. Using M/S techniques to separate Mid and Sides elements, these production qualities are more readily revealed to the listener. For example, when soloing the Mid part of the mix, EQ and dynamics processes used for clarity and separation between instruments are more clearly audible, while effects and panned instruments are attenuated. Conversely, by soloing the sides, effects processing and peripheral instruments can be heard more clearly, with all centrally panned parts being practically muted. This 'educational' use of M/ S to analyse existing tracks really does help to develop a better understanding of mixcraft, and is something that we explore regularly in these pages in The Mix Review, so check out that column, and definitely do try this at home!

The audio examples that accompany this article can be found online at /sos/apr12/articles/reapermedia.htm.