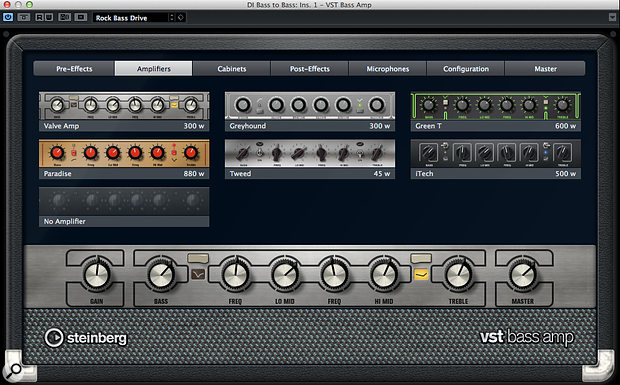 The new VST Bass Amp offers six different models and plenty of effects and processing options but not, unfortunately, an ‘octave up’ facility in its Octaver effect.

Ever since the likes of Jimi Hendrix and Cream graced the charts, it’s been obvious just how much noise a ‘power trio’ can make, and many bands have followed in their footsteps. But in recent years, some artists have taken the concept further, stripping the line-up back to two while still delivering ‘big’ sounds. The most obvious example is perhaps the White Stripes, whose guitarist Jack White often applied a bit of pitch-shifting to his guitar sound to fill out the bottom end of some of the riff-based songs. The latest such ‘power duo’ to hit the charts is Royal Blood, who play only electric bass and drums, and yet manage to make a very impressive amount of sound.

Cubase 8 brought with it the new VST Bass Amp plug-in, which, along with a few other of Cubase’s in-built tools, can easily be used to create something in the style of Royal Blood’s bass-driven riffs. Here’s how...

The band are understandably a little secretive about the exact details of the setup they used to create their sound, but in essence the bass output is split and sent to two amplifiers: one a bass amp, as you’d expect, but the other a guitar amp. Both amps are tube-based, and the feed to the guitar amp is passed through some sort of pitch-processor, to shift the part up an octave. And for their live performances at least, the setup allows the player to mute the feed to either amp as and when required.

Cubase Pro 8 has all the tools required to create a similar setup — and while we might not be able to copy the sound exactly, we can certainly capture the key features. Note, though, that if you want to emulate the setup using a single bass instrument, whether a ‘real’ one or something MIDI-based, it requires careful configuration.

Finding two different amps is not a problem: along with the new VST Bass Amp we have access to Cubase’s VST Amp Rack to take care of the guitar tone. For pitch-shifting the bass signal, we have a couple of options, but it’s not as straightforward as you might expect: while both amp plug-ins include an Octaver pedal emulation, these can only pitch-shift down an octave, not up. Fortunately, the Pitch Correct plug-in can provide real-time pitch-shifting in either direction, so for real-time performance we can use that instead.

What the best way is to assemble these various elements in Cubase will depend to some extent on the source of your bass sound, so let’s explore the two most likely options: a DI’d mono signal from an actual electric bass, and a virtual instrument that’s triggered via MIDI.

The most important thing for both is to route the ‘dry’ signal to our two separate amps, and if you want the effect while performing you’ll need low monitoring latency, so set the sample buffer for your audio interface as low as it will go without nasty clicks, pops and other glitches. If you’re just applying this effect to an already recorded part, the latency isn’t an issue. With the above points in mind, the easiest approach for a DI’d bass is as follows: 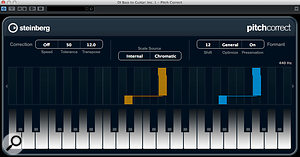 The Pitch Correct plug-in can provide real-time pitch-shifting. Here, the original input pitch is shown in orange, while the output pitch (transposed by 12 semitones) is shown in blue.1. Create two mono audio tracks and set each one’s input to receive audio from your DI’d bass by selecting the appropriate input from your interface.

2. On both audio tracks, activate the Monitor switch (the small speaker icon, which will glow yellow when engaged). This allows you to monitor the bass sound through any plug-ins applied to these two tracks.

3. On the first track, insert an instance of VST Bass Amp and pick a preset (just to get you started) for your main bass sound. I find that the Rock Bass Drive, which uses the Valve Amp model, is a good starting point, but be sure to tweak the Gain setting to taste.

With the Pitch Correct plug-in inserted before the VST Amp Rack, the virtual guitar rig gets an octave-shifted version of the original bass part. 4. On the second track, insert an instance of Pitch Correct and set the Transpose value to +12. You should be prepared to experiment with the Formant Shift setting to obtain the most natural-sounding result.

5. In the next insert slot, instantiate VST Amp Rack and choose a preset for your guitar sound. There are plenty of options here, but one of the Plexi-based models (for example, Gold Hi Gain 5) will make for a good starting point — again, adjust the gain to taste.

6. Balance the levels of the two tracks using their channel faders (the precise balance is both a matter of taste and dependent on the sounds and gain settings you’ve opted to use).

All that remains is to add any processing (compression, EQ and so on) you require to shape your sounds further to taste. I’ve also found that panning the guitar-based track very slightly to one side can improve the separation between the two sounds. 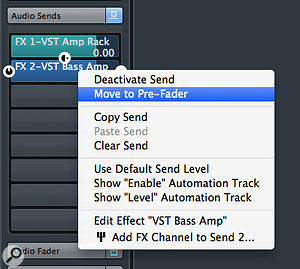 Sends to FX Channels can be configured to be either post- or pre-fader.Now you can get on with playing!

If you’re not a guitar/bass player, you can attempt to mimic this approach using a MIDI-based electric bass sound. For this example, I’ll take you through a slightly different way that you can set things:

1. Create two FX Channels and treat one as your bass channel, the other as your guitar channel — configure the amp and pitch-shift insert effects as in the DI bass example.

3. On the instrument track, route a pre-fader send to the ‘bass amp’ FX Channel and another to the ‘pitch-shift+guitar amp’ FX channel. To make a send pre-fader, right-click on the Send in the Mixer or Track Inspector and choose ‘Move to pre-fader’; the send level indicator turns an aquamarine colour instead of the default post-fader blue.

This approach gives you three faders to play with, compared with the two of the earlier DI example — you can blend the original virtual instrument bass sound with the two virtual amp sounds, so you have extra sonic options. For example, you can lower the Instrument channel’s fader to zero (muting the direct output from MIDI instrument) but still hear the sound processed through the two amp models by adjusting the send levels. Note that you could, if you wished, use this approach with a DI’d bass, perhaps applying filtering to one of the DI track’s two post-fader insert slots (slots 7 and 8 on every channel are always post-fader). Again, add any other mix processing you wish to any track, and get on with playing your parts.

If there’s a weak link in either of the above approaches, it’s the real-time pitch-shifting offered by the Pitch Correct plug-in — when used to process the low frequencies of a bass guitar, the results can sound a little ‘lumpy’ at times, and this undesirable effect is only exaggerated by a (virtual) high-gain guitar stack. If using this setup live, that’s a problem (overcome by investing in a better real-time pitch-shift solution), but in a recording context there are many ways to cheat. I’ll try not to stray too far from our original idea, though!

Having recorded your DI’d bass guitar part, you can always improve the quality of the pitch-shifting using VariAudio. Cubase includes several offline pitch-shifting tools (for example, VariAudio) and the quality of the result using most of these will generally be much better. If using the first approach that I described for DI’d bass guitar, you can use the setup described earlier to monitor your performance while recording your bass parts but, afterwards, copy the recorded DI audio part and apply offline pitch-shifting to raise it an octave — thus neatly side-stepping the problems of the Pitch Correct plug-in. If you’re using a VSTi you could, again, monitor using the approach described earlier. Once you’ve created/edited the required MIDI part, simply create a second instance of your VST instrument, transpose the MIDI by one octave, and send this to the VST Amp Rack.

It should be noted that when used to pitch-shift down by a single octave, the Octaver effects built into both the VST Amp Rack and the VST Bass Amp plug-ins actually do a decent job. Even if you do play bass, a third option is to trade the Royal Blood approach for the Jack White solution: start with a guitar sound and modify the first approach so that your DI’d guitar is pitched down an octave before feeding an instance of VST Bass Amp. I created a couple of audio examples to show you how effective this trick can be. You can find them at http://sosm.ag/aug15media.

This example uses a DI’d electric bass as described in the main text of the article. The audio is split into four parts: (i) the dry DI’d bass, (ii) the DI’d bass processed through the VST Bass Amp, (iii) as for (ii) but with the real-time pitch-shifted version also passed through the VST Amp Rack and (iv) as for (iii) but using the ‘cheat’ described in the main text (using VariAudio to create a pitch-shifted version of the bass track) that avoids having to use the real-time pitch-correction.

This example uses a MIDI-based electric bass from Halion Sonic SE2 as described in the main text of the article. The audio is split into four parts: (i) the dry MIDI bass, (ii) the MIDI bass processed through the VST Bass Amp, (iii) as for (ii) but with the real-time pitch-shifted version also passed through the VST Amp Rack and (iv) as for (iii) but using the ‘cheat’ described in the main text (creating a second instance of Halion Sonic bass patch) that avoids having to use the real-time pitch-correction.

VST Bass Amp was introduced for the first time with Cubase Pro 8. It’s very similar to the VST Amp Rack guitar-amp modelling plug-in included in earlier versions, but features emulations of gear for use with electric bass. With six different amp models, four cabinet types, over 20 effects pedals and the option to blend any two of eight different virtual microphone types and adjust their placement in front of the speaker cabinet, you can coax a huge range of tones out of this plug-in. It might not have the ‘street cool’ of a real bass stack but it sounds solid and is both flexible and convenient.