Now that the excitement surrounding the launch of DP 4.5 has subsided somewhat, developments by MOTU-friendly companies get this month's column under way.

The most important news of recent weeks from MOTU themselves has been the availability of updated OS X USB MIDI drivers, from www.motu.com. The version 1.3 drivers provide improved MIDI timing and efficiency, and an update of the Clockworks application that is now compatible with the Digital Timepiece synchroniser. The update is recommended for any users of MOTU MIDI interfaces, including the Fastlane. Obviously, if you're using another manufacturer's Core MIDI-compatible interface, or the MIDI sockets on a MOTU audio interface (such as the 828 MkII) you're not going to need these drivers.

Reason To Be Cheerful

If you use Reason with Digital Performer, you're no doubt aware of the new version, Reason 3, which was released a few weeks ago. To some extent it's business as usual if you use Reason Rewired to DP, but the new Combinator device really makes a difference. It's much easier to drive multiple Reason devices simultaneously from DP, as you can select a Combinator as an output destination for a MIDI track in DP. The only thing you have to watch is that your Combinators are named appropriately, as all the devices they contain also show up in DP 's output pop-ups, and it's all too easy to end up driving something within a Combinator, rather than the Combinator itself. Sometimes you may want to do this, but it could lead to major confusion when working with big track counts and an even bigger Reason rack! 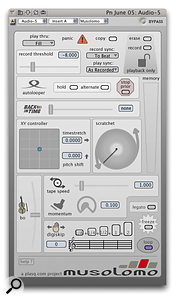 Another thing to be aware of is the slightly altered Preferences window in Reason. Previously, when working with Reason rewired to DP you'd go to the 'MIDI' page within Preferences and select 'No MIDI Input', to make sure that it was only DP that drove Reason and that it was never being 'played' directly by your master keyboard. In v3, though, you can leave your 'Control Surfaces and Keyboards' set up, and instead deselect the 'Use with Reason ' option for them before starting on a Rewired session. This is a much more elegant solution.

Ultimately, the DP/Reason combo remains as useful and robust as ever, and it was a great pleasure, after I first installed Reason 3, to discover that joint DP and Reason projects opened and ran just the way they'd always done, with no hoop-jumping whatsoever.

This month's prize for strangest plug-in goes to Musolomo, from www.plasq.com. Plasq are a collective of musicians and programmers including some familiar names: Robert Grant of Granted Software (Rax, Audio Unit Manager) and Adrian Pflugshaupt (Apulsoft Wormhole) to name just two. Their first creation, Musolomo, is a specialised sample-playback instrument. Although it can be applied to a track like any other processing plug-in, it won't do much until you 'play' it via a MIDI keyboard, at which point all sorts of mayhem ensues, including scratching emulation and that sought-after 'tape stop' effect.

Be prepared to put in some work, though — the manual is essential, as are the instruction videos at the Plasq website. You might still find that it takes a few minutes to get your head around the basic idea, but Musolomo seems like a lot of fun and can do things I can't imagine achieving in any other way. Watch out for a tutorial in a future issue.

DP's bundled plug-ins are great, but it's not until you use the best plug-ins third-party developers have to offer that you realise how good plug-ins really can be. The big-money Waves collections are something of an industry standard, but many DP users also rely on much more affordable plug-ins by the likes of Wave Arts, Audio Ease and PSP Audioware for decent quality and distinctive audio processing. 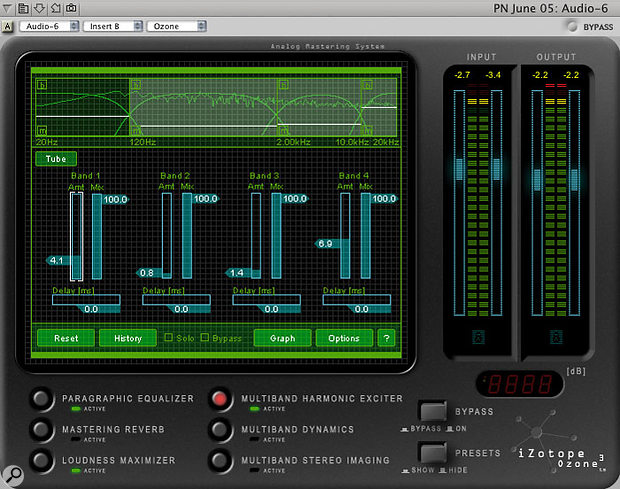 Having recently had the pleasure of checking out their entire product range for the first time, I'd definitely recommend adding iZotope (www.izotope.com) to your list of 'must audition' third-party plug-in developers. Their products are genuine MAS plug-ins, and they're both extraordinarily powerful and lovely to work with. First up is Vinyl, a freebie vinyl simulator — nice, but inevitably somewhat limited. Ozone is a different kettle of fish, offering six simultaneous mastering-type processes that could be equally applicable to individual tracks on occasion. The loudness maximizer and harmonic exciter elements, in particular, are stunning, with a genuine 'high-end' feel. Then there's Spectron, another multi-talented plug-in that performs all sorts of mind-bending and genuinely novel frequency domain tricks. Finally, there's Trash, a flexible and great-sounding distortion and cabinet-modelling processor treading a finely judged line between guitar friendliness and ultimate flexibility for other tasks.

All the iZotope plug-ins represent the cutting-edge of signal processing, interface design and ease of use. Wonderful stuff, and highly recommended, as long as you've a nice fast Mac. My dual G4 just about coped...